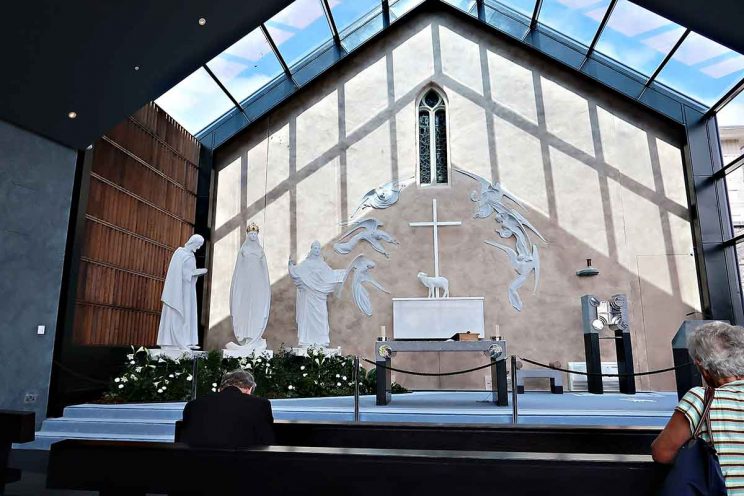 Pilgrims pray before a depiction of the apparition at the place in Knock, Ireland, where it happened on a rainy night in 1879. (All photos: Günther Simmermacher)

Unlike most other Marian apparitions, that in Knock was silent. Having visited Knock as part of the Southern Cross pilgrimage to Ireland in August, GÜNTHER SIMMERMACHER reflects on the shrine.

There have been reported apparitions of Our Lady in many dozens of places, some approved by the Vatican, others decidedly not. What almost all have in common is a message conveyed by Our Lady through her intermediaries.

Usually in these apparitions, the Blessed Virgin is much like a strict mom: “I am your mother, so you listen to me. I’m disappointed in all your shenanigans. Stop misbehaving, clean up your room, and eat your spinach, or else — and I love you.”

The apparition of Our Lady at Knock, in County Mayo in western Ireland, is different. Here she was silent.

On August 21, 1879, an image of Our Lady, Queen of Heaven, flanked by her husband Joseph and St John the Evangelist, as well as a lamb and a cross looked over by angels, appeared on the gable of the church in the village of An Cnoc (Gaelic for “The Hill”).

It was a rainy evening at around 8 pm when Mary Beirne, 29, and the parish priest’s 68-year-old housekeeper, Mary McLoughlin, saw what we might now call a projection on the south gable of St John the Baptist church. Except, in 1879 there were no such things as projectors that could create such an effect.

Further away, just under a kilometre, a local farmer later testified seeing a large globe of golden light above and around the church.

Word of this strange phenomenon quickly spread, with up to 25 people coming to the church to see the apparition. Of those, 14 are officially named as witnesses, ranging in age from 75 to five years old. Those witnesses were drenched by the rain, but the wall on which the apparition appeared remained dry.

And inside the presbytery, parish priest Archdeacon Bartholomew Cavanaugh was oblivious to all those goings-on outside, misunderstanding Mrs McLoughlin’s communication that something extraordinary was, in fact, happening.

Earlier that day, Fr Cavanaugh had completed the 100th of consecutive daily Masses for the souls in purgatory. He later was convinced that the appearance of Our Lady that night was related to that. 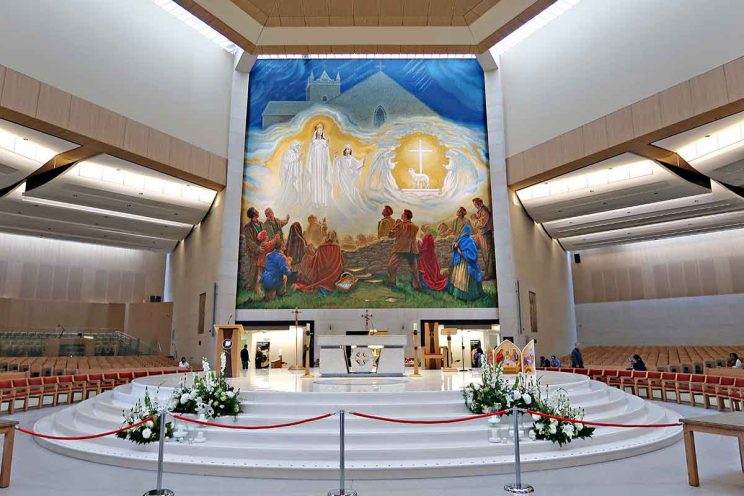 The huge mosaic of the apparition in Knock basilica

After two hours the apparition disappeared — and An Cnoc, which we now anglicise as Knock, would never be the same again.

Word of the apparition quickly spread, and with so many witnesses being consistent in their accounts, they were believed. Soon miracles were reported.

A photo taken in 1879 shows many crutches and walking sticks being left at the apparition wall, presumably by people who experienced healing after praying there. A sign put up by Archdeacon Cavanaugh requests: “It is important that any miraculous cures be reported to the parish priest.” The priest’s “Diary of Cures” can still be seen in Knock’s small, award-winning museum.

Miraculous cures are still reported at Knock. Our group of Southern Cross pilgrims met the recipient of one of them.

Marion Carroll was paralysed from multiple sclerosis and near death when she came to Knock in 1989. After praying in front of a statue of Our Lady and taking the holy water at the shrine, she received Communion at Mass. Suddenly, she said, she felt a pain in her feet. Once it dissipated, she could stand up, not even feeling stiff after all those years in a wheelchair. Medical examinations confirmed that the MS had gone. The cure was inexplicable and permanent. 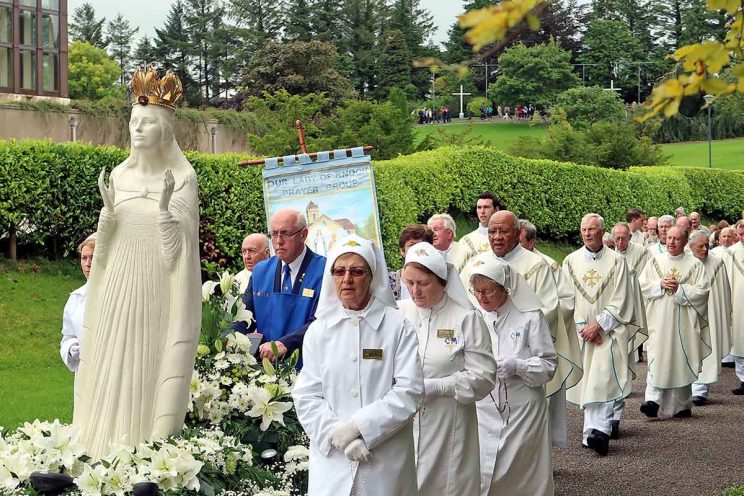 Marian procession around the Knock sanctuary, with Fr Peter Whitehead of East London in the first line of clergy

There is no way of knowing whether the cures that took place 110 years earlier were likewise medically inexplicable and permanent — the definition of a miracle — but as the photo from 1879 of the crutches and walking sticks suggests, they were spontaneous.

Within just over six weeks of the apparition, Archbishop John MacHale of Tuam launched a commission to investigate the claims. The commission found the testimonies of the witnesses consistent and trustworthy. A second commission of inquiry in 1936, which interviewed surviving witnesses and the relatives of the departed visionaries, confirmed that finding.

So, why was this apparition silent? Our guide in Knock suggested that within the context in which Our Lady appeared, there was no need for big pronouncements.

Ireland had been hit by another wave of famine around that time, and the people were suffering unemployment, land evictions and emigration forced by poverty. The time was marked by British oppression and the civil unrest known as the Land Wars.

So in this apparition, the Blessed Virgin came to give solidarity. Perhaps her companions were there to give the people strength through the Eucharist (symbolised by the lamb), the Gospel (John the Evangelist), heavenly protection (the angels) and united action in faith (St Joseph).

The apparitions of Knock played a vital role in the rise of Irish nationalism that culminated in the uprisings against the British occupation and subsequent independence for the Republic of Ireland.

The old church of St John the Baptist no longer stands, all that is left of it is the tower at the entrance to the current parish church, which adjoins the apparition chapel.

The sanctuary of Knock has been developed to serve the estimated 1,5 million people who come there every year. Our group, led by Bishop Victor Phalana of Klerksdorp, added to that number.

We came on the anniversary of the apparitions, but as we explored the sanctuary and prayed there, it wasn’t very busy. Perhaps, we thought, the forecast of rain deterred people; but, as it was throughout the pilgrimage, we were spared heavy rains. So we could do the beautiful Stations of the Cross without umbrellas or needing to jostle for space with other groups, and pray in the magnificent basilica in reverent silence.

We returned to the basilica, which was built in 1976 and holds 10000 people, in the afternoon for the feast day’s Mass. Now it was full. At the altar beneath a mammoth mosaic depicting the apparition, was Bishop Phalana, alongside two other pilgrim bishops, from Scotland and the US. Among the clergy at the altar were also two priests in our group, 90-year-old Fr John Shand SCP of Klerksdorp  formerly of Pretoria) and Fr Peter Whitehead of Port Elizabeth, both marvellous men.

The administration of Communion was well-organised: the congregation did not queue but stood at their places while the priest squeezed along the pews to feed the flock.

The Mass was followed by a Marian procession around the sanctuary, finishing at the apparition chapel. 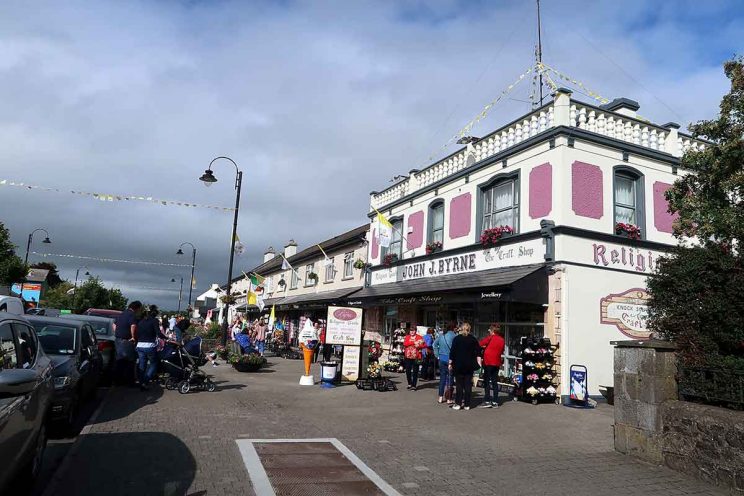 Pleasingly, Knock is not commercialised. I find that the frequent charge of holy shrines being too commercialised rarely holds true.

Even in Lourdes, the town of which is a paroxysm of commercialism, the sanctuary is free from such activity. And it is in the sanctuaries (and in ourselves) that we seek and hopefully find God, not in the souvenir shops.

Frankly, if the commerce around the shrines puts food on people’s tables, who am I to complain?

Still, around Knock’s shrine there are just a few souvenir shops selling religious items and the usual leprechaun-and-Guinness tourism tat, a couple of restaurants, and that’s it.

Our Lady of Solidarity

The shrine of Knock invites prayer and reflection. Indeed, while pilgrims at most Marian shrines  have themes to pray over given by Our Lady in her messages, at Knock the reflections must be guided by discernment on what exactly the wordless Blessed Virgin wanted to communicate here.

By being silent and not alone, Our Lady gave us a blank canvas for that discernment, and with that, much scope for prayer and reflection.

For some it is significant that the apparitions took place on the very day that Archdeacon Cavanaugh completed his century of Masses for the souls in purgatory. It is indeed commendable to pray for the repose of those who have died and it can bring the bereaved great comfort in their grief.

Others may focus on the message of solidarity: Our Lady’s implicit promise that she’ll always be there for those who need her protection. This is an important message for the faithful today, at a time when we are trying to come to grips with the abuse scandal.

Our Lady of Knock needn’t tell us to collectively repent; we know that we must pray for our Church in these discouraging times.

At Knock, Our Lady points us to the sources of strength in faith which we need at a time when our confidence in the humans running the Church is shaken: the Lamb of God in the sacrifice of the Eucharist, in the Gospel of Christ, in the protection of heaven, and the People of God who, like St Joseph, continue to toil in the vineyard of the Lord, no matter what.

The Church in Ireland is Still Present

Pilgrimage to Ireland in Pictures