Why Confession Seal Cannot be Broken 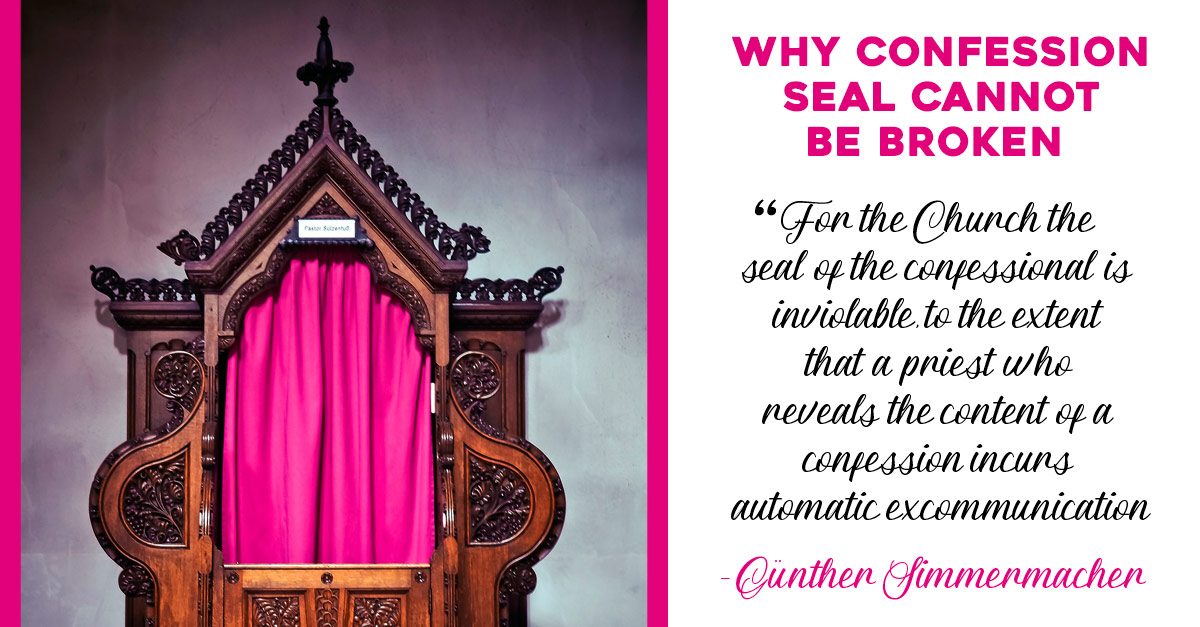 Calls are getting louder for the seal of the confessional in the sacrament of reconciliation to be loosened to compel a priest to report confessions of sexual abuse to the civil authorities.

The Catholic Church rightly rejects these calls, even as, at face value, they are reasonable.

If a priest learns of a serious crime being committed, the reasoning goes, he should be compelled to report that crime to the civil authorities. For those who have no attachment to the sacrament of reconciliation, that proposition is common sense.

Even for some Catholics, the protection of people from sexual predators should precede the theology which underpins the sacrament. For the Church the seal of the confessional is inviolable, to the extent that a priest who reveals the content of a confession incurs automatic excommunication.

Most Catholics, however, would disagree. For the Church the seal of the confessional is inviolable, to the extent that a priest who reveals the content of a confession incurs automatic excommunication.

A confession is an act between a penitent and God, with the priest present merely as an intermediary of God’s mercy. In relation to confessions, a priest cannot act according to his own personal impulses (which in cases such as sexual abuse might well be to go straight to the police).

A law that would require a priest to reveal the content of a confession would neither encourage nor compel such a priest to report a crime to civil authorities, simply because he cannot do that. He would sooner go to jail. Such a law would criminalise priests for acting at that moment on behalf of God.

There are also practical considerations which speak against legislation aimed at forcing a priest to reveal the content of confessions.

The most self-evident argument is that if confessions are not sealed in secrecy and the revelation of crimes would be liable to be reported, abusers would likely not reveal their crimes in the confessional.

This would deprive confessors of the opportunity to counsel abusers to change their ways and urge them to turn themselves over to the police, even at the cost of self-incrimination.

The call to subject the seal of the confessional to limitations seems to work on the false assumption that absolution is granted automatically, with abusers cheerfully emerging from the confessional with a clean slate to resume their evil ways. Penitents come to confession knowing that they cannot be validly absolved of their sins if they have no intention of ceasing their transgression (be it criminal or trivial)

But penitents come to confession knowing that they cannot be validly absolved of their sins if they have no intention of ceasing their transgression (be it criminal or trivial).

Absolution demands a sincere desire to stop the sin. So an abuser — certainly one who lives with an overwhelming psychological drive to commit acts of sexual violence against his better judgment — might come to confession in search of help in overcoming these dark urges.

A confessor might be the only person such an abuser confides to about his (or her) crimes, and therefore would be the only person to shine a light of goodness into dark hearts. The confessional offers a rare occasion for criminals to be advised of the consequences of their actions, to be urged to cease their evil and to seek help, and even to make things right by self-incrimination.

The confessional offers a rare occasion for criminals to be advised of the consequences of their actions, to be urged to cease their evil and to seek help, and even to make things right by self-incrimination.

Since confession is secret, no statistics exist on how effective such guidance might be. But if we remove the recourse to counselling in the setting of confession, we may well exacerbate the problem of abuse, not root it out.

In cases where people report having been or being abused, a confessor must encourage the person to report that crime to the civil and Church authorities. He might also offer assistance in doing so if asked to outside the confessional.

As Catholics, we cannot accept any law that would compromise the seal of the confessional. But we can call on the Church to ensure that confessors are equipped to deal with the confessions of abusers and the confidences of abuse victims.

And we must pray for the heavy burden our priests bear in having to live with and keep secret the knowledge of the evils committed by others.

My Greedy Church Cares Nothing for its People
Share