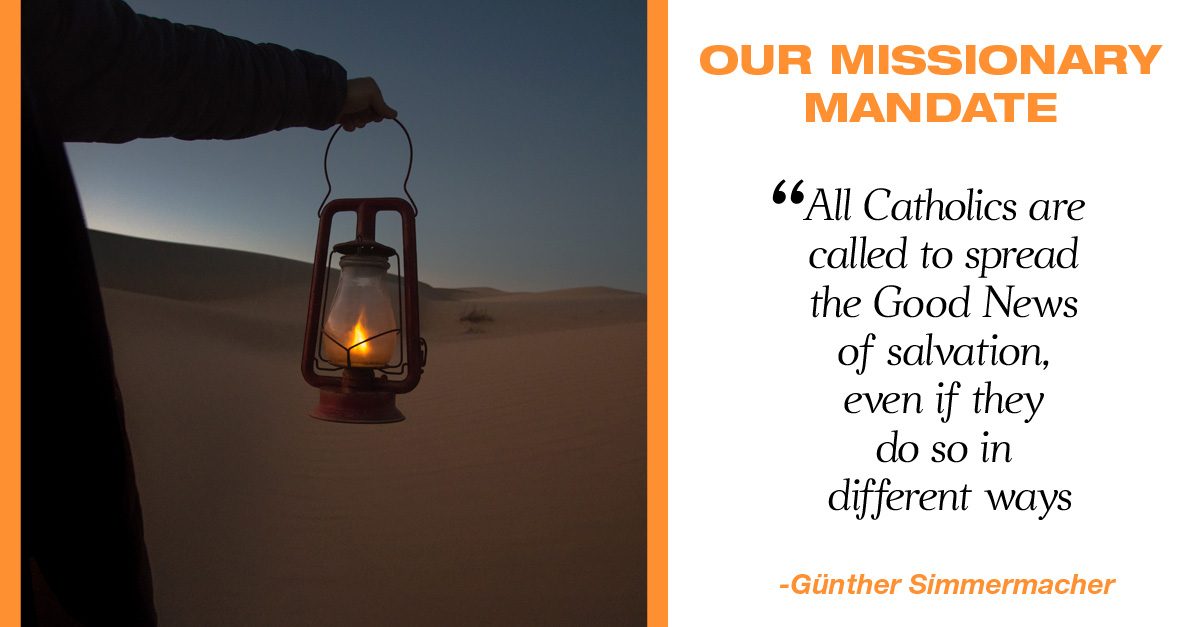 On Mission Sunday we recall with gratitude the great legacy of priests and religious who over the past 150 years left their home countries to bring the Good News to our region.

Even today, our local Church benefits from young missionary priests who come from other countries to minister in Southern Africa. But where in the past such missionaries would come mostly from Europe, they now come increasingly from Asia (especially from India) and other parts of Africa.

We give thanks for their sacrifice.

At the same time, there is a growing recognition in the Church that missionary work is not the domain of priests and religious alone. By their baptism and confirmation, all Catholics are missionary disciples of Christ. All Catholics are called to spread the Good News of salvation, even if they do so in different ways.

All Catholics are called to spread the Good News of salvation, even if they do so in different ways.

Missionaries in the consecrated and sacerdotal life are specifically trained to evangelise in ways that most lay people are not. So the Church is calling on the laity to evangelise simply by the example of their faith-filled lives.

This is good advice, even if the mandate to evangelise by worthy example ought to be backed up by good formation and education.

More than priests or religious, it’s lay Catholics who are most likely to be confronted by others with criticism of the Church or reservations about their faith. Some of these may be theological or ideological, but most concern preconceived notions about Catholicism. And these prejudices, fed by secular media that are hostile to the Church, can also lead baptised Catholics away.

In the context of the Synod for Youth this month, the well-known evangeliser Bishop Robert Barron proposed a “renewed apologetics and catechesis” which could help young people who are tempted to leave the Church due to convictions “that religion is opposed to science or that it cannot stand up to rational scrutiny, that its beliefs are outmoded [and] a holdover from a primitive time, that the Bible is unreliable, that religious belief gives rise to violence, and that God is a threat to human freedom”. Such apologetics and catechesis is also needed for all Catholics who have to explain their faith and correct misconceptions about it, hopefully in a manner that communicates Christ’s love.

But all this will be ineffective if Catholics don’t mind their ways. How can we invoke the peace of Christ when there is so much evident hatred among his followers, even and especially among bishops and cardinals?

How can we propose Jesus when the Body of Christ is divided? How can we speak of Christ’s love when we clearly don’t love one another but instead engage in ideological warfare? How can we invoke the peace of Christ when there is so much evident hatred among his followers, even and especially among bishops and cardinals?

How can we proclaim the Good News when we are broadcasting bigoted and toxic views? How can we defend Christ when we also defend the indefensible?

As a Church, we must find ways of proposing and reproposing Christ by living out God’s infinite mercy and with it the joy of our faith, which is rooted in Christ and not in men.

And where that is not enough to persuade others, we must identify and propose what marketers would call our “unique selling proposition”.

One of these selling propositions is the sum of what sets the Catholic Church apart: our sacraments, our devotional life, our unity (albeit imperfect) through the pope, our special dedication to our Blessed Mother and the saints, our sense of charity and so on.

All of this gives Catholics a unique identity. Even at a time when scandals make it increasingly difficult to ward off disenchantment with the institutional Church, we can nonetheless joyously live these elements of that identity, which are independent of the failures of men. Our aim is simply to open hearts to the message of the Good News.

It is in communicating the joy of our faith and attaching importance to our Catholic identity that we can attract those who reject it. We cannot measure this by how many membership forms are filled in. Our aim is simply to open hearts to the message of the Good News.

When we do that, we are fulfilling our missionary mandate.

How to Be Fully Prolife

With Hope Into South Africa’s Future