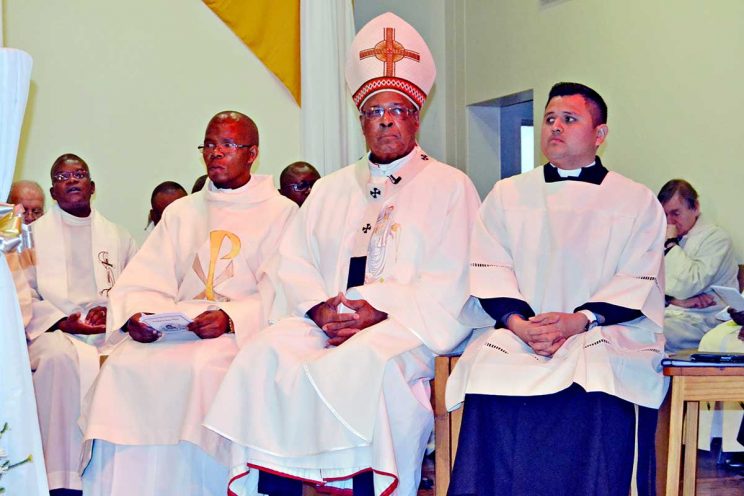 Started 75 years ago as a scholasticate for South African Missionary Oblates of Mary Immaculate, St Joseph’s Theological Institute in Cedara, near Pietermaritzburg, now gives formation to people from different congregations and regions for the priesthood and religious life.

St Joseph’s scholasticate, like the mustard seed, was sown by a team of zealous missionaries from France in 1943. Seventy-five years later, this little seed has become a mighty tree whose foliage continues to nourish and mould priests and brothers for the local Church and beyond.

Oblates from around Southern Africa and afar, together with associates and friends, defied the torrential rains to celebrate 75 years of the goodness of the Lord in their special missionary formation activities so far at Cedara.

Looking back with gratitude, the newly appointed provincial superior of the recently consolidated Oblates province and former St Joseph’s rector, Fr Neil Frank OMI, recalled some of the toughest  challenges the scholasticate went through in its 75 years.

He noted that St Joseph’s was born in the context of World War II. “I am thinking also of constitutionalised apartheid…that threatened the non-racial policy of the scholasticate. It even forced the community to sit in different places in public spaces, like in cinemas; it was very hurting to all the members during that time.”

Looking at the present, Fr Frank said: “Our scholasticate has become more international than it has been previously; South Africans no longer dominate in numbers. This has increased the intercultural experience and has enriched our lives. It also provides a good basis for clarifying what the African questions are and seeking African answers to them.”

The tough past became an opportunity for a rich theology that challenged oppressive regimes and gave hope to the masses, Fr Frank said. He expressed hope that the scholasticate and St Joseph’s Theological Institute will bring contextual theology to bear on the current socio-political problems of growing poverty, the land issue, corruption, and the education crisis in South Africa.

Tribute to the Oblates

Cardinal Wilfrid Napier of Durban, who presided over the anniversary Mass, paid glowing tribute to the Oblates for the many gifts and blessings granted the Church of Southern Africa.

Reflecting on some of its contributions towards the development of the new South Africa, Cardinal Napier recalled with nostalgia the work on peace that was produced at St Joseph’s.

“I think in our present circumstances, with so much violence in society — of every nature — it will be a good idea to have a look at what that work from Cedara produced in terms of things that make for peace.”

Cardinal Napier urged St Joseph’s to be a sign of hope for a Church where child sexual abuse would become a thing of the past, “by instilling a new spirit and a new way of understanding what the Gospel challenge means today, and teaching the new generation of young people how to be true to their calling, never to allow the ways of the world to draw them aside”.

In light of the recent Pennsylvania grand jury report, the cardinal regretted the deep wounds of the clergy abuse scandal, but added that the media were portraying the issue out of context.

“That report was about child abuse by clergy, by Church personnel for the last 70 years, because it caused a huge stir. Every bishop, every priest, is now looked at with suspicion because the media is just emphasising it one after the other, and I don’t blame them for emphasising it — but making it look as if it’s happening right now, that I blame them for,” Cardinal Napier said.

In his vote of thanks, St Joseph’s superior Fr Joseph Phiri OMI said the formation team would carry on the legacy of forming “responsible young men who are dedicating their lives to working for God”.

He enjoined the scholastics to live responsibly as their actions today would have implications for many years to come.

“You have heard the challenge; you’re the hope of the future and therefore, like our founder said, we have to build human beings first, become good Christians and then hopefully, saints. So, my brothers, aim to be saints,” Fr Phiri said.

The History of  St Joseph’s Scholasticate

St Joseph’s Scholasticate was founded in 1943 to fill the gap during World War II when it became impossible for the Oblates to send candidates to Europe for studies, as was the practice then.

The number of candidates increased after the war, with a move first to Cleland and then, at the start of 1953, to Cedara.

St Joseph’s in Cedara began as a two-storey structure, built on donated farmland. One of the first students described the buildings as a huge block of concrete, but this custom-made house fostered growth in its students, for both South Africa and Australia. Scholastics laid out the gardens, planted trees and worked on the farm; a welcome relief from classes since, although lectures were given in English, textbooks were in Latin.

In 1971, two Dominican students arrived, then some seminarians from Cape Town and later in 1976 clerical students from Mariannhill Missionaries were transferred to Cedara. Capuchins, Missionaries of the Sacred Heart, Franciscans, Oblates of Francis de Sales and others also began arriving.

Currently, the Oblate scholasticate is also home to students of the young Missionary Society of Divine Paraclete from Nigeria.

Ok, What’s the Big Deal with Vatican II and How Does it Affect us Today?

The investigation into allegations of sexual harassment of adults by Bishop Michael J. Bransfield, former bishop of the Diocese of...