Pope: Church’s Problems are Caused by its Own Members 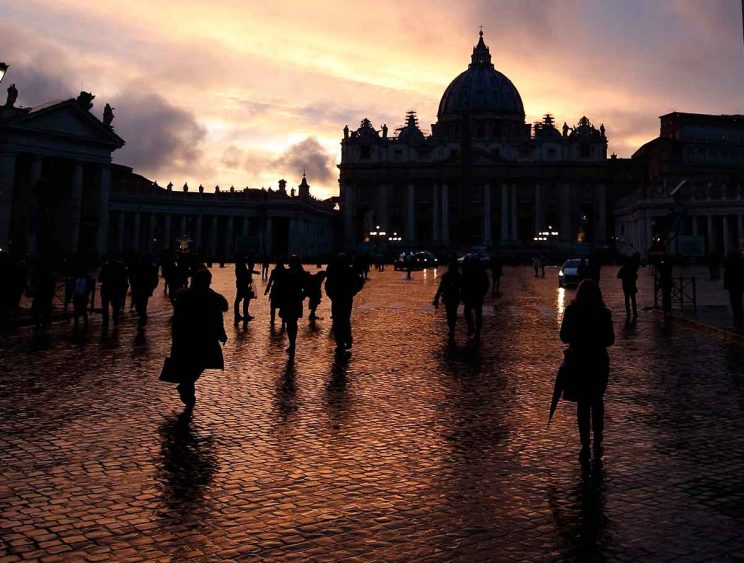 A sunset after a day of rain illuminates the cobblestones near the Vatican in Rome. (CNS photo/Paul Haring)

The barque of the church is being buffeted by strong winds of scandal created by its own members, Pope Francis told a group of priests from France.

When the church is “hit by opposing and violent winds, especially because of grave sins committed by some of its members,” the pope said Oct. 1, Catholics should not forget “the humble daily fidelity” of “the vast majority of those who have given their lives to the church as priests.”

The pope spoke about the scandal and the priesthood with 100 priests and friends from the Diocese of Creteil, France, who were making a pilgrimage to Rome.

“We know that, responding to the call of the Lord, we were not consecrated with the gift of the Spirit to be ‘superheroes,'” the pope told the priests. “We were sent with the awareness of being men who are forgiven and called to become pastors in the way Jesus was: injured, dead and risen.”

Honesty about being human and recipients of God’s mercy is part of a priest’s ministry, the pope said. It is an essential part of “witnessing to the power of the Resurrection over the wounds of this world.”

As the Diocese of Creteil works on reorganising structures after a diocesan synod in 2016, Pope Francis urged the priests to help their parishioners “respond to their baptismal vocation” to be witnesses to the joy of the Gospel.

And, he said, “do not be afraid to look at the wounds in your church, not to complain about them, but to bring them to Jesus Christ. He alone can heal them.”- CNS

Pope: Lead People Away From Error