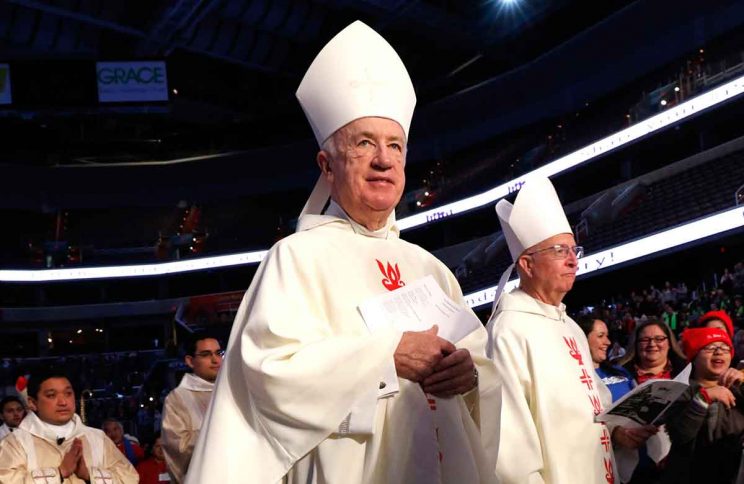 Bishop Michael J. Bransfield, now-retired bishop of Wheeling-Charleston, W.Va, centre, processes at the beginning of a pro-life youth Mass in 2016 at the Verizon Centre in Washington. An investigation has begun into the sexual harassment allegations made against him. (CNS photo/Gregory A. Shemitz)

The investigation into allegations of sexual harassment of adults by Bishop Michael J. Bransfield, former bishop of the Diocese of Wheeling-Charleston, is being led by a five-member team of laity.

The team is comprised of three men and two women, including one non-Catholic, empaneled by Archbishop William E. Lori of Baltimore, who is apostolic administrator of the diocese.

In a letter to clergy of Wheeling-Charleston, the archbishop said the team members “bring a breadth of investigative expertise and experience to their work. My charge to the investigative team is simple: follow the truth wherever it leads.”

The investigation of the allegations has begun and includes a review of more than three dozen calls made to the hotline, which was established by the archbishop for those wishing to share any information related to the investigation. The hotline was made available on the day of the archbishop’s appointment as apostolic administrator of the diocese.

Bryan Minor, who was recently appointed by Archbishop Lori as delegate for administrative affairs for the Diocese of Wheeling-Charleston, said that the five-member investigative team will remain anonymous, and emphasised the significance of the investigation being conducted by the laity.

Pope Francis accepted Bishop Bransfield’s resignation as bishop of Wheeling-Charleston and appointed Archbishop Lori apostolic administrator of the diocese and instructed him to conduct the investigation into the allegations the same day. By Colleen Rowan Catholic News Service