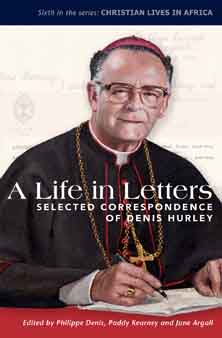 To anyone who knew him, however remotely, the idea of His Eminence Owen Cardinal McCann being referred to as “[a]nother chap, whose name, I think, is McCann” is slightly disconcerting. Likewise the thought of Archbishop Denis Hurley being “the same old Denny”.

But that is how the young Hurley describes himself in a letter to his family on July 9, 1939, the day of his priestly ordination; and how he described his countryman and more senior colleague a few years previously when he was also a seminarian in Rome.

These are just two of the more minor gems in this wonderful volume.

Nine years after he published the excellent biography, Guardian of the Light, the late archbishops’ close associate Paddy Kearney (who died shortly after launching the book) once again placed us in his debt by bringing out, this time with co-editors Philippe Denis OP and Jane Argall, A Life in Letters: Selected Correspondence of Denis Hurley.

The 251 letters are presented in strict chronological order, and a number of themes span the whole of his life, chief among them his family.

The earliest letter, at age 11, is written to “Dear Mummy”, for her birthday, and encloses a tea-cosy. The last, composed 78 years later, is to his brother Chris: it was discovered on his dictaphone a few days after his death.

His sister Eileen seems to have been his main epistolary muse, and his many letters to her are full of observations about the people he met, the places he saw, and the weighty matters he was busy with, all lightly described.

Another enduring theme is travel: in his last letter, having just returned from Italy, he writes with relish about the food, the architecture, and the scenery of the Roman countryside.

Many of his letters were written during his numerous long sojourns overseas—in the seminary, at the extended sessions of Vatican II, and at meetings of the Synod of Bishops. He clearly enjoyed his innumerable trips to attend meetings, to speak at conferences, to accept honorary degrees, and sometimes just to relax with friends.

And then there is cricket. Hardly any of the early letters, written while he was a student at St Charles’ College in Pietermaritzburg, fail to contain some reference to a cricket match, or to comment on the performances of his younger brothers.

At the other end of his life, his last two letters both refer to the West Indies’ 2004 tour of South Africa; the visitors were receiving “an unmerciful hammering, despite the fact they have Ryan Hurley in their team”.

But the collection also deals extensively with deeply serious issues. The editors note that “[i]n the 1930s, the young Hurley was still victim of the social and racial prejudices which his education as a white South African had inculcated in him”.

And indeed, it is shocking to read in a letter written during his voyage to Ireland to commence his novitiate in 1932, a line such as this: “The only fly in the ointment is that we have Indians and Coloureds on board, no Indian rajahs and nabobs but common old sammys and as dirty as they are common.” The words of a 16-year-old, we should remember.

As one works through the letters, and as Hurley’s consciousness of the evils of racial oppression develops, one sees how he managed — unlike most of his white South African contemporaries — to a large extent to free himself from these prejudices.

By 1961 Albert Luthuli, president of the ANC, is writing to him as “one so concerned about our liberation. We value very much your efforts for our welfare.” 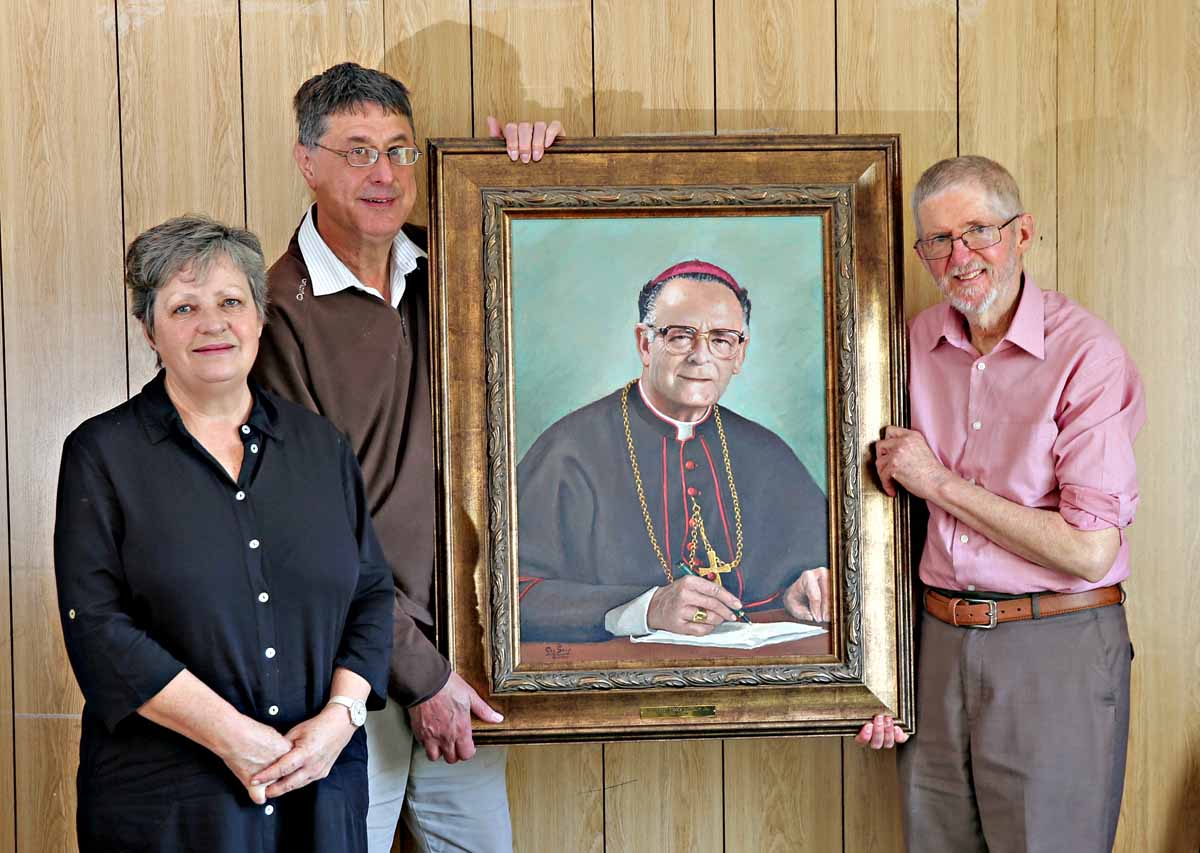 the three editors of A Life in Letters: Aelected Correspondence of Denis Hurley with Guy Savy’s portrait of Archbishop Hurley which appears on the cover of the book. From left: Jane Argall, Br Philippe Denis OP, Paddy Kearney. (Photo: Justin Walldman)

Four years later, after Archbishop Whelan of Bloemfontein had notoriously defended apartheid, the journalist Donald Woods sends Hurley a telegram: “Thank God for you stop If you had not repudiated Whelan statement I would have left the Church stop Keep on advocating real Christianity stop Many are praying for you and depending on you – Donald Woods”

The letters of this period are fascinating for any reader interested in the institutional Church’s stance towards the then encroaching ideology of apartheid. In a word, the stance was timid. Hurley was taken to task — in excruciatingly polite terms — by Cardinal Agagianian, the head of the Congregation for the Propagation of the Faith, for his decision to accept the presidency of the SA Institute of Race Relations.

It did “not seem convenient, in the present circumstances” that the Church should be seen as “tied to an institution, the activity of which does not fall under its control”, wrote the cardinal. Thus was the idea of even a mild example of Christian prophetic witness to be sacrificed on the altar of Catholic exceptionalism.

Letters To A pope

Hurley’s determination to address social and political wrongs at home — and his perseverance in doing so from a minority position among his peers, and in the teeth of prevailing authority — was mirrored by his resolve to speak out forcefully on theological and pastoral issues which he felt demanded attention.

There are many striking examples. Perhaps the most moving is a long letter he wrote to Pope Paul VI in 1967, in the wake of the publication of Humanae Vitae. In it, Hurley deals quite provocatively with various points: artificial birth control; the magisterium; collegiality; leadership in the Church.

This letter brought a lengthy personal reply from Pope Paul which made no concessions and which, amidst many felicitations, noted reprovingly, “here and there in the letter, certainly without intention on your part, there are expressions which a less well-disposed reader might find somewhat wanting in respect for the Apostolic See”.

Not daunted, Hurley wrote again to the pope a few years later, in anticipation of the 1971 Synod of Bishops: “While realising how painful any discussion of priestly celibacy will be to Your Holiness, I think it inevitable that the Synod will give a good deal of attention to this aspect of priestly life.”

The question of women’s ordination comes up a number of times. He writes in 1970: “If we really believe in human rights, we have a job to explain why we debar women from the sanctuary.”

Hurley held to that view to the end of his life, writing to a friend in 2002 that, despite Pope John Paul II having “forbidden people even to discuss the matter… I think women have the human right to enter the Catholic priesthood and I believe that one day they will. Please don’t whisper that in the pope’s ear!”

And there were many other causes, from all walks of life, that took him to his typewriter. The terrible political violence in Kwa-Zulu-Natal in the early 1990s; the situation of African workers, exploited and denied the right to strike; the HIV/Aids pandemic; and, perhaps one of the greatest frustrations of his final years, the Vatican’s highbrow linguistic vandalism that left the Church with such clumsy and awkward English liturgical texts.

Both our country and our Church were blessed by the ministry of Denis Hurley, in its depth and in its longevity.

This collection, itself just a fraction of the letters he is known to have written, can only reinforce our appreciation of that blessing, and renew our affection towards a man who never stopped advocating real Christianity.