Paddy Kearney, the biographer of Archbishop Denis Hurley and former director of the Diakonia Council of Churches, died suddenly of heart attack in the afternoon of November 23. He was 76. 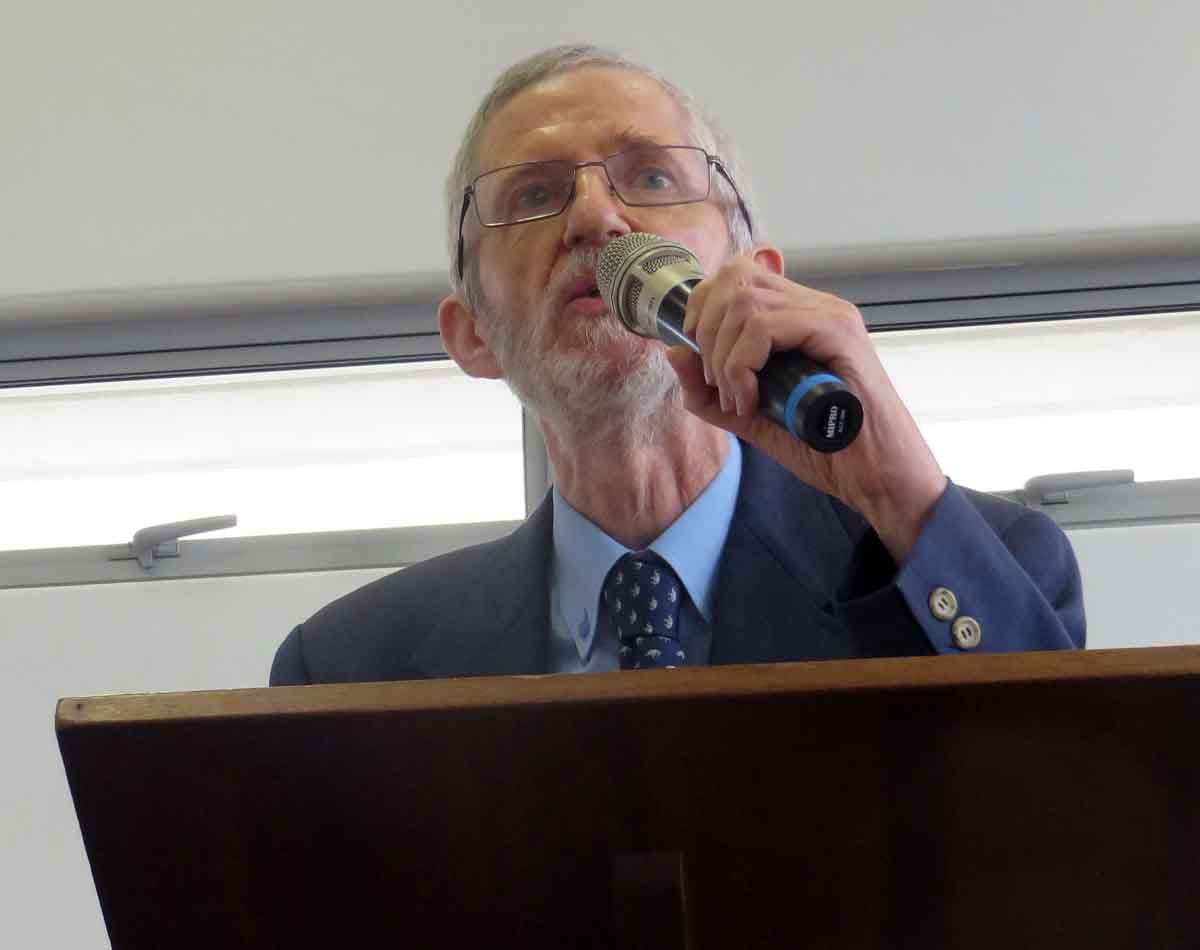 Paddy Kearney speaks at the official opening of the Denis Hurley Centre in Durban in 2015. (Photo: Günther Simmermacher)

Mr Kearney had just returned from Johannesburg for the launch on Wednesday of the book of Archbishop Hurley’s letters, which he co-edited. He returned to Durban, and, thinking he might have pneumonia, was taken to hospital by his brother Brian this morning. In the late afternoon he suffered a heart attack and died.

Paddy Kearney was born on August 28, 1942. He went to St Charles Marist College in Pietermaritzburg and for some years was a brother in the Marist order.

He worked closely alongside Archbishop Hurley. Among several books he wrote or edited on the late archbishop was his magisterial biography, Guardian of the Light.

He was the founder and chair and founder of the Denis Hurley Centre, founding director of Diakonia Council of Churches (which he headed for 30 years), chair of the Gandhi Development Trust, and advisor to KZN Christian Council, among many other important positions. 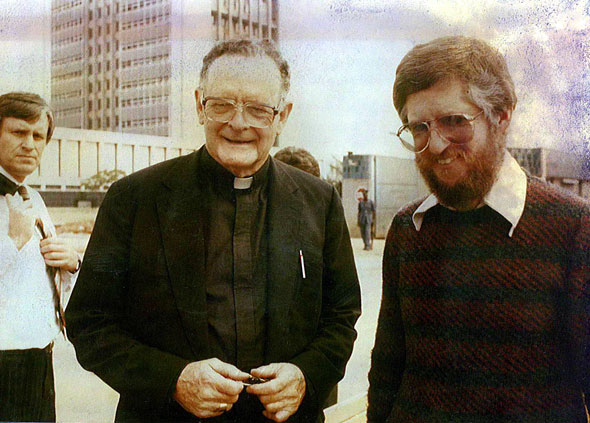 In his 76 years he was a tireless activist for the poor, the marginalised, for inter-faith partnership, social cohesion and peace.

A political activist, in 1985 Mr Kearney was detained by the Security Police under Section 29 of the Internal Security Act. His release was secured by the legal intervention prompted by Advocate (now Judge) Chris Nicholson, then director of the Legal Resources Centre, Archbishop Hurley in the case Minister of Law and Order and Others v Hurley and Another, which challenged the legality of Section 29.

“I knew nothing until I was released after 17 days,” Mr Kearney later recalled of what he said was a scary experience involving daily interrogation. When he came out of CR Swart station (now Durban Central), Archbishop Hurley and Diakonia staff were waiting for him.

He recounted the experience earlier this year in a documentary on him on the TV programme The Light, which is available on YouTube.

In August this year he was awarded the papal Bene Merenti medal during Mass in Durban’s Emmanuel cathedral.

In 2014, Kearney was awarded the eThekwini Living Legend award, and an honorary doctorate by the University of KwaZulu-Natal. 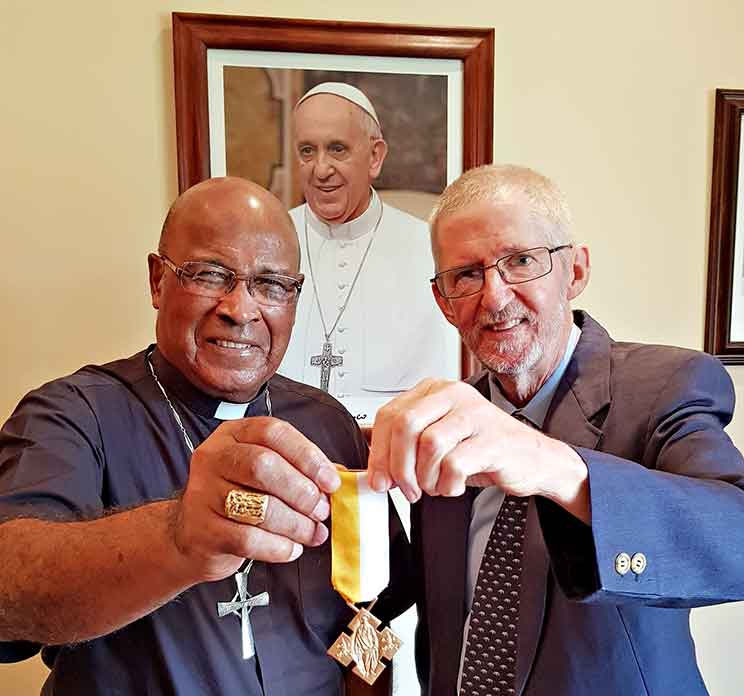 “The Johannesburg launch on Wednesday evening had been a wonderfully successful, happy and celebratory occasion—very well attended, and the book stock was sold out and we had to take extra orders—and Paddy had been delighted by it all,” said Douglas Irvine of We Are All Church SA.

The book is reviewed in this week’s issue of The Southern Cross.

“Paddy leaves behind a huge family in the organisations that he founded and inspired,” said Denis Hurley Centre director Raymond Perrier.

“The Diakonia Centre and the Denis Hurley Centre, which he helped create, are united in mourning with Christians and people of all faiths, across Durban and across the country. For me, he was more than a boss, he was a daily inspiration and a daily reminder that whatever we for the poor, we should do more.”

Southern Cross editor Günther Simmermacher said he was in shock at learning of Mr Kearney’s death.

“I had been looking forward to seeing him at the Cape Town launch of the book next week,” he said.

“Paddy was one of those rare people who got things done, quietly and decisively. Often he used his substantial powers of persuasion. It was difficult to say ‘no’ to Paddy because you knew that what he asked you to do always was for an intrinsic good,” Mr Simmermacher said.

“He was a gentle and generous man who sought to follow the Christ of the Gospel. He will be missed by very many people.” 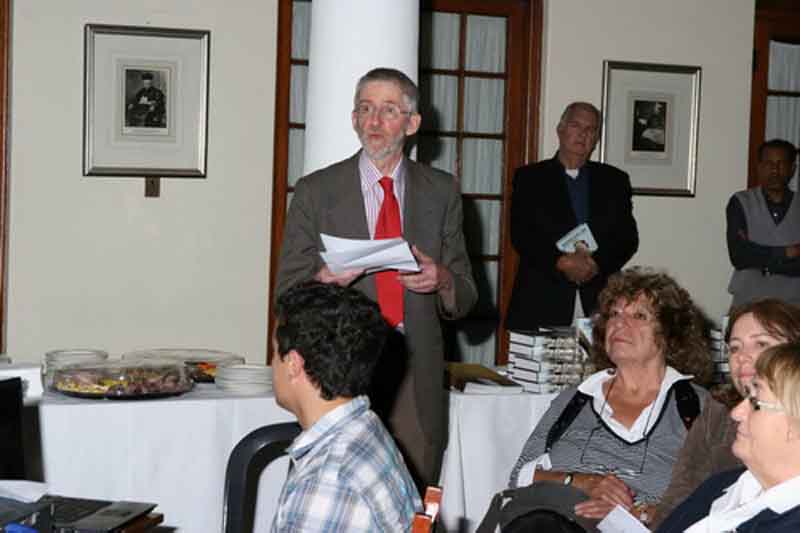 Paddy Kearney at the Cape Town launch of Guardian Of The Light in 2009.

On Friday night a vigil of prayers and candles was offered outside the Diakonia offices, and Muslim leaders in mosques throughout Durban offered prayers during their Friday evening services.

At 17:30 on Saturday, November 24, a memorial Mass will be celebrated in Mr Kearney’s honour at Emmanuel Cathedral.  All are welcome.

A Requiem Mass for Mr Kearney will be celebrated in Emmanuel cathedral on Saturday, December 1 at 14:00.