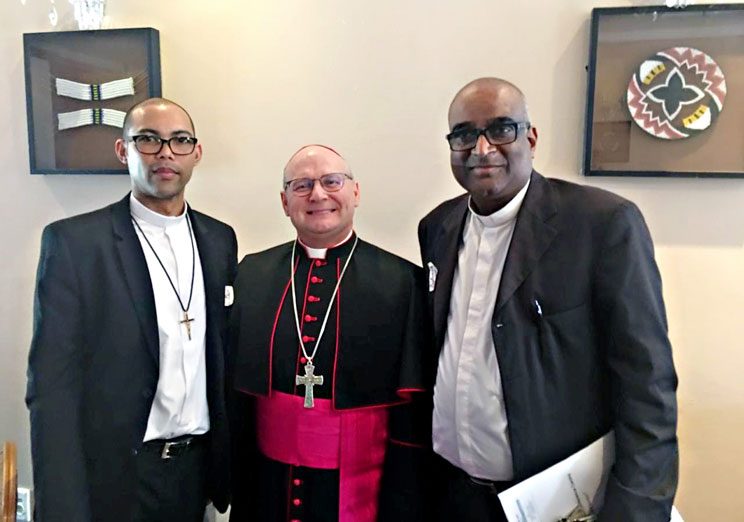 The papal nuncio addressed the inaugural Bishop Barry Wood OMI Business Breakfast, which is planned to become an annual event to raise funds for the development of St Joseph’s Theological Institute (SJTI) at Cedara, near Pietermaritzburg.

The breakfast event was named after the late auxiliary bishop of Durban. SJTI, an Oblate-founded institute, trains future priests, from religious orders and congregations.

Hosted at Emakhosini Hotel in Durban, the event’s keynote speaker was Archbishop Peter Wells, the apostolic nuncio to Southern Africa.

After a brief introduction by Fr Sylvester David OMI, vicar-general of the archdiocese of Durban and former SJTI president, the nuncio addressed the gathering of mainly Catholic business people on the subject of Catholic education.

The well-received address was the topic of much discussion during the breakfast.

Fr Allan Moss OMI and Lionel Samuels responded to the nuncio’s address, speaking about the development of courses for the laity and the Catholic Schools Office respectively.

Br Nhlanhla Mhlanga, financial administrator of SJTI, and Clement Chetty presented the proposed project of a multi-purpose conference centre which the institute hopes will become a venue where both clergy and laity will come to receive ongoing theological training.

It is foreseen that the centre will also be used by various organisations in the Church and society to host conferences and other meetings. It will also have several classrooms, which will allow for expansion of SJTI.

Those present pledged finances as well as expertise to assist the centre in bringing this project to fruition. The projected date of completion is 2021 at an estimated cost of R25 million.

SJTI president Fr Ewen Swartz OMI explained that the vision of the institute is to become a centre for Catholic theology in the KwaZulu-Natal region and Southern Africa.

He thanked those present for their support and assured them that the institute will continue to engage with them as well as other business people, communities and organisations in order to raise the necessary funds for this and other future projects.