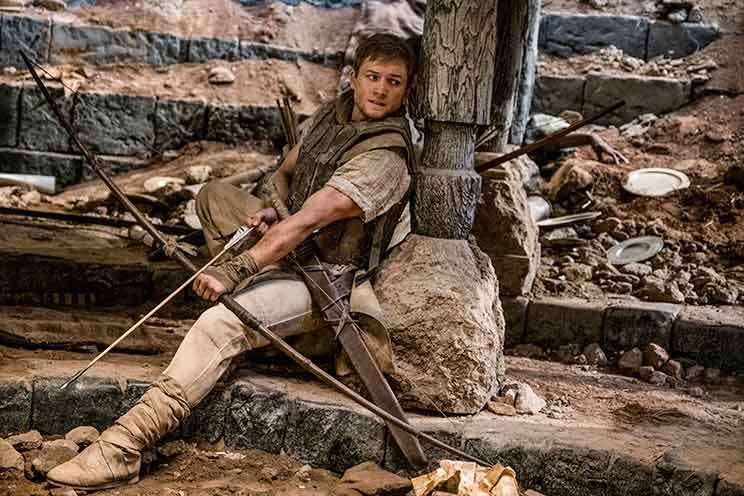 Taron Egerton stars in a scene from the movie “Robin Hood.” – CNS

Someone behind “Robin Hood”- presumably one or both of the screenwriters, Ben Chandler and David James Kelly – has mommy issues with Holy Mother Church. As a result, vicious anti-Catholicism permeates this otherwise merely dopey take on the classic legend.

We know we’re not in for an especially sophisticated retelling when, early on, Taron Egerton as the titular outlaw is drafted into the Third Crusade. Apparently, the pope of the time hasn’t been picking birthdays out of a fishbowl while blindfolded. Rather, Robin’s conscription is the work of his perennial nemesis, the Sheriff of Nottingham (Ben Mendelsohn, much given to howling).

While battling in the Holy Land, Robin shows compassion for the plight of Muslim prisoner of war Yahya (Jamie Foxx) who subsequently escapes, follows him back to England, acquires the more pronounceable name John and proposes a plan. Together they’ll rock the establishment to its core by a series of bold robberies designed to deprive the sheriff of the ill-gotten tax money on which he bases his power.

Robin is out for vengeance since the sheriff, during his absence, announced his death, thus freeing Marian (Eve Hewson) to forsake Robin in favour of Will Tillman (Jamie Dornan). It’s unclear whether the feisty lass, who later provides Robin with some battlefield backup, was or is married to either man, though she shares the dwelling of both.

To add real-estate insult to romantic injury, the sheriff also seized Robin’s manor which, by the time of his return, had fallen into complete disrepair.

As John trains Robin for his stint as a proto-Bolshevik bank robber, we get the first indication of just how angry someone involved in this project is at the church since the targets on which Robin practices his archery are all pictures of the saints. Take that, ye watchers and ye holy ones!

But things really ratchet up once the sheriff’s more powerful patron, an unnamed cardinal (F. Murray Abraham) appears on the scene — his arrival celebrated by a decadent party reminiscent of the “Time Warp” scene in “The Rocky Horror Picture Show.” Fear, this wise prelate later informs us, is God’s most powerful weapon; “that’s why the church invented hell.” Oh, is that why.

Friar Tuck (Tim Minchin), who generally offers what meagre comic relief the movie can summon, also on occasion mentions Gospel values, apparently unaware that the version of the church on display here long ago jettisoned all that stuff. The cardinal soon wises him up.

Indulging in a little pop psychology, the script traces the sheriff’s twisted ways to the physical and sexual abuse he and others suffered at the orphanage in which he was raised, maltreatment engaged in and perversely savoured by priests and aristocrats alike.

The church of the Middle Ages was hardly without its flaws and a warts-and-all presentation of it could not be called out of bounds. But the image of Catholicism that emerges in director Otto Bathurst’s chronologically unmoored and would-be hip updating of his ancient source material is not merely unflattering but grotesque and morally obscene.

It’s hard to imagine how any Catholic could patronise “Robin Hood” with a clear conscience. By John Mulderig Catholic News Service