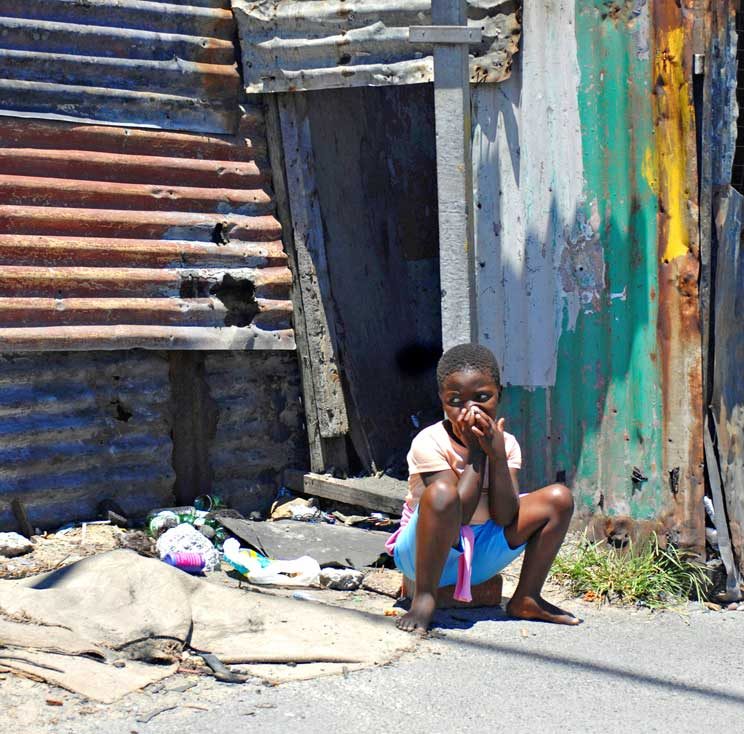 A boy sits outside a house in a Cape Town township. For the Church, taking care of the poor is a gospel command. On November 18, the Church observes the second World Day of the Poor, an initiative of Pope Francis. (Photo: Harald Oppitz, KNA/CNS

Catholics must not forget the poor who “form part of the social fibre”, according to a priest who works with Caritas, the social outreach and development arm of the Southern African Catholic Bishops’ Conference (SACBC).

“Caritas is at the heart of evangelisation, and is the home of the poor,” Fr Patrick Rakeketsi CSS, SACBC associate secretary-general, told The Southern Cross.

The second World Day of the Poor, an initiative of Pope Francis, is observed on November 18, the 33rd Sunday in ordinary time.

World Day of the Poor was first proposed in 2016 in Pope Francis’ apostolic letter for the Year of Mercy, Misericordia et misera, which calls on the faithful to “make a serious examination of conscience, to see if we are truly capable of hearing the cry of the poor”.

“Deeply moved by the Jubilee Year of Mercy, Pope Francis expressed a desire for this spirit to be present in different Catholic realities in the whole world: dioceses, parishes, movements, associations, communities,” Fr Rakeketsi said.

With such a large portion of the population affected by poverty, Fr Rakeketsi encourages South Africans to “arrange their Sundays in such a way that this day remains remarkable among the poor as well as in the community”.

One of the basic principles of Catholicism is the “Preferential Option for the Poor” which calls on all Catholics to create conditions for the marginalised, to defend the defenceless, and assess society and the impact it has on the poor.

Pope Francis has noted that poverty is caused by pride, greed, injustice and selfishness.

“God’s act of liberation is a saving act for those who lift up to him their sorrow and distress. The bondage of poverty is shattered by the power of God’s intervention,” the pope said.

Working to unshackle the poor from that bondage are welfare organisations such as the Kolping Society of South Africa.

“We set up groups where we can help people gain access to opportunities, like, for instance, work. We also train young people with life skills and with work skills so that they can carve out a better future for themselves.”

Other organisations focus on material relief. One of these is the Society of St Vincent de Paul (SVP), which, like Kolping, is an international society. The SVP is represented in many parishes across South Africa.

“The core work of the society is to serve the poor by visiting them in their homes,” said Kevin Barnard, the SVP’s national legal advisor. “Our vision was expressed by our French founder, Bl Frederic Ozanam, who said, ‘by drawing closer to the poor, we draw closer to God’.”

The SVP also has homes for the aged and for children, runs soup kitchens, and raises funds for its poverty-relief activities through charity shops.

For World Day of the Poor, the SVP has asked parishioners to bring loaves of breads and spreads to weekend Masses of November 17/18. The loaves will be collected by the respective parishes, whose members are then encouraged to bring the food to their local SVP branch.

“Parishioners are being encouraged to assist with the making of sandwiches for the poor after each Mass on the weekend, and to help SVP members in distributing them to the poor,” said Mr Barnard.

The SACBC is also asking parishioners to help those in need on November 18.

“The Sunday is dedicated to praying for the poor as well as to making visible gestures in reaching out to them, such as providing meals for the poor, giving out clothing to them, and other gestures,” Fr Rakeketsi said.

Looking beyond the World Day of the Poor, Kolping’s Ms Turner said: “The public should look out for opportunities and requests from organisations like the Kolping Society and others working for poverty relief. They must offer their skills, time and resources, and stand behind organisations and movements that are there to help uplift the poor.”

This can take the form of volunteering as well as offering material contributions, including donations.

“People are encouraged to continue to give generously the poor.”

And while one’s individual contributions may seem insignificant, Pope Francis has emphasised that any help or effort that aims to help those in need is meaningful,

“It may well be like a drop of water in the desert of poverty, yet it can serve as a sign of sharing with those in need, and enable them to sense the active presence of a brother or a sister.”

In Misericordia et misera, the pope  warned that “as long as Lazarus lies at the door of our homes (Lk 16:19-21), there can be no justice or social peace”.

Volunteer Programme has it all: Rural Projects plus Kruger Safaris

100 Ways to Help Durban and Your Fellow Man!
Share