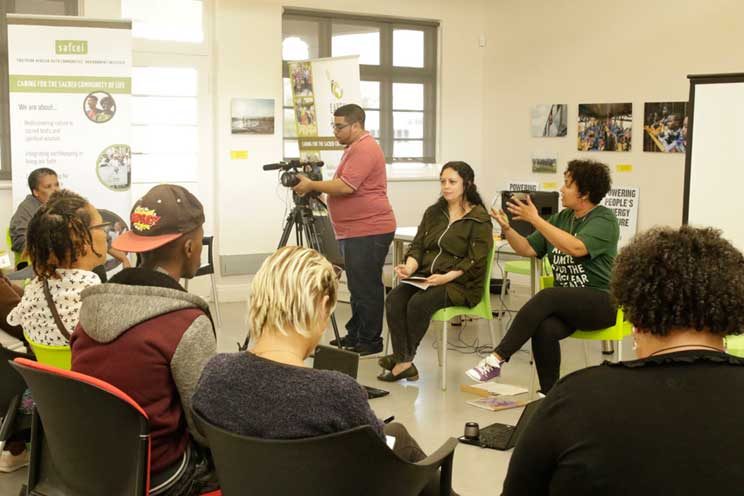 Faith communities must change the way they speak about climate change, and hold those who contribute to it accountable, a priest told religious leaders.

“If we want to change the situation, we need to name it. Name it and shame it as sin,” Jesuit Brother Ngonidzashe Edward told a People’s Power Learning Fest on Energy Justice event hosted in Cape Town by the Southern African Faith Communities’ Environment Institute.

Br Edward called on the Church and Catholic communities to mobilise against climate change and advocate for energy justice.

“The kind of space the Church occupies is important. We need to be more a part of the social justice ministry,” the Zimbabwean-born climate activist said. “The cry of the earth is the cry of the poor. It’s time to connect the dots.”

The SAFCEI is a “multi-faith organisation committed to supporting faith leaders and their communities in Southern Africa’’ on issues regarding the earth and the environment, according to the institute’s website. It aims to promote ‘’awareness, understanding and action on eco-justice, sustainable living and climate change”.

The conference aimed to raise awareness among faith leaders and community activists across the region on the importance of energy as well as energy injustice. It included speakers from different faith groups.

Ndivile Makoena, a Catholic and project coordinator of GenderCC, a women’s climate-justice organisation, called politicians and communities to action on climate change.

“Proper climate action is guided by politicians. But I think that we give politicians too much power. It’s time we take it back,” Ms Makoena said.

“We always say it’s a justice and economic issue,” she said, but added: “Now it’s time to add the spiritual part.”

Ryan Fortune, a member of the African Climate & Development Initiative at the University of Cape Town, echoed the call to hold those who are responsible for continually contributing to climate change accountable. “People who have got us to this place have names and addresses: call them out!” he said.

Mr Fortune pointed out that it is going to “require unprecedented changes” to fight climate change: “You have to change a political system that no one wants to change.”

“Society has successfully broken our link with nature,” he said. “Nature is God’s second book. Even if you don’t read the Bible, you can always feel God’s presence in nature.”

Married after 25 Years of Friendship!

IT costs up to R100000 to train a guide dog for the blind, and the South African Guide-Dogs Association for...