There is a War Within Myself 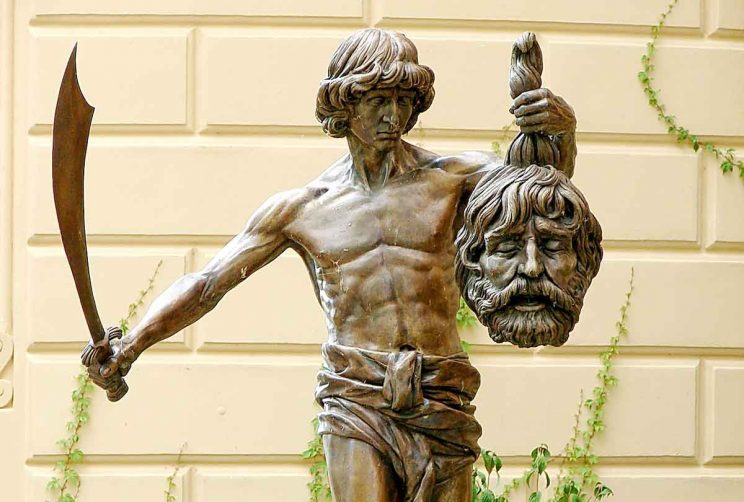 Would David have been celebrated as highly if Goliath had been his own the size?

There is a war within my soul where the gentle pitter-patter of rain is replaced by thunder and violent tempests.

There is a war within my soul where the calm streams are interrupted by jagged rocks and an overwhelming mass of dead trees.

There is a war within my soul where pointed icicles are swallowed by an inferno. Water and wind, fire and ice, the good and the evil roll the dice.

It can be argued that in every great story ever told, the size of the hero is measured by the size of the villain. The triumph of David would not have been celebrated as highly as it was had Goliath been his own size. Harry Potter would not be praised as the valiant wizard he was if Voldemort were a small, troublesome mouse. Jesus would not have become the Christ if he had not defeated Satan.

It is true that all can conquer small things but few can conquer the large, the frightening and the seemingly undefeatable. It is this that makes Joan now Saint Joan of Arc, Mother Teresa now Saint Teresa of Calcutta and Mary now Mary, Queen of Heaven.

What is it about villains in TV shows, comic books and movies that makes us despise them so heavily? Is it their grand yet silly costumes? Is it their cacophony of laughter? Is it their chilling determination to succeed in their wicked schemes?

At the heart of it, at the core, when the veiling has been stripped away, what sickens us the most about villains is that they represent everything that we wish not to be but could so easily become. They show us what pride will look like when humility is purged.

We tremble at the monster of wrath when patience is beaten and broken. The ghoul of gluttony now spooks the gentle nature of temperance. Is this not what disgusts Batman as he encounters The Joker? A human creature much like himself yet cruel and deeply twisted.

And is this not what makes demons so terrifying? For once they were beautiful creatures who glowed in the light of Heaven. They abandoned its bright immaculateness for the putrid squalors of hell.

Understand me now when I speak of the battle within me. There are raging rapids which will not give way to sacred stillness. Out of unrelenting spiritual boredom, there is a rebelliousness that wishes to gush out. Yet I desire so desperately to be an “angel” that I calm these waters with virtue.

There is not always, in this life at least, any “fun” in doing the good. The lives of the holy seem so hollow but those of the evil seem so exciting. In the former there is dryness and self-denial; in the latter there is dancing and indulgence. I wish to shine with divine light but I fear I will be found to be a fraud. I will be a judge to be judged and one who condemns to be condemned.

There is a war within my soul where the divine is in a duel with the diabolical. There is the locking of shields and the clamour of swords. There is Batman and The Joker, an angel and a demon, darkness and light.

Amidst the loading of canons and the firing of rifles, may the sweet silence of virtue their banging stifle.