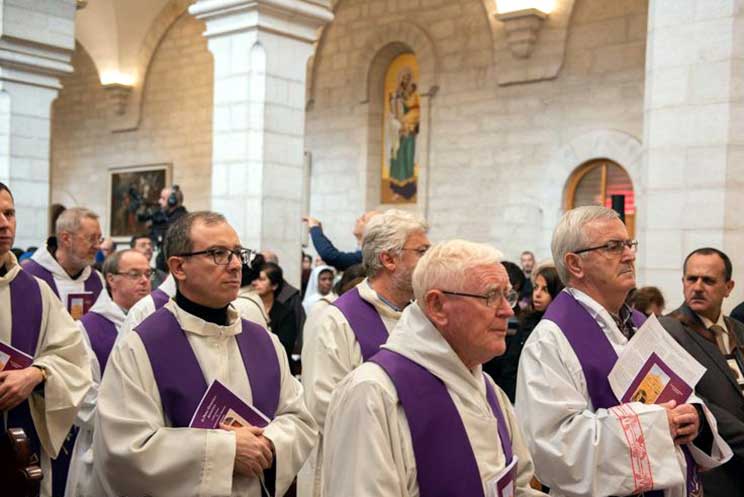 Franciscans in procession in the church of St Catherine in Bethlehem, Palestine, at the closing Mass of the International Congress of the Commissaries of the Holy Land. Fr Hyacinth Ennis OFM, commissioner for the Holy Land in South Africa, is second from right. (Photo: Nadim Asfour/ Custody of the Holy Land)

A Pretoria Franciscan has called on his confrères throughout Africa to set up local commissaries of the Holy Land.

At present, the South African commissary is the only one on the continent. Its head, Fr Hyacinth Ennis OFM, urged that every country with a Franciscan presence appoint a commissioner.

Fr Ennis made the call at the International Congress of the Commissaries of the Holy Land, which brought together 63 commissioners from 51 countries at St Saviour’s monastery in Jerusalem’s Old City.

He noted there are Franciscans in many African countries — including both Congos, Mozambique, Angola, Kenya and throughout West Africa — and said there is no reason they should not have commissaries to promote pilgrimages to the Holy Land and solidarity with Christians there, and to other regions covered by the Franciscan Custody.

“The conference was very concerned about the situation in Syria and Iraq”, where the Franciscans care for holy shrines and local Christians, Fr Ennis told The Southern Cross.

The conference’s emphasis was on how the Franciscans, who take care of most Christian shrines in the Holy Land, can further the ethos of pilgrimages. This was encapsulated in the conference’s theme, “The Pastoral Care of the Pilgrimage: welcome, memory, evangelisation”.

Experts from the order and outside emphasised the importance of promoting pilgrimages to the Holy Land. The conference stressed that pilgrims need contact with friars, the reading of appropriate Scriptures at various sites, and the right liturgy being available to them.

Cardinal Leonardo Sandri, the Vatican’s prefect for the Congregation for Eastern Churches, added that pilgrimages to other Christian shrines should be encouraged too, referring to the newly renovated Holy Stairs in Rome as an example.

With the accent on pilgrimage as evangelisation, Fr Russel Murray, general animator for evangelisation, said: “Pilgrimage includes all three words—memory, welcome, and evangelisation—because those who visit the Holy Land remember a past story which returns to be present; they are welcomed and they welcome; and because a pilgrimage cannot be made in solitude but as the body of Christ, these things experienced in depth are evangelisation.”

Fr Michael Perry, the order’s minister-general, told the Franciscans: “The mission of God continues to welcome people, accompanying them all as brothers in the Holy Land. And to bring this message to all corners of the world, that what God has made available for the future of humanity gives great hope, much more than we see today.”

The delegates were taken on a trip to Samaria, almost completely in Palestinian territory, where the programme included a visit to Jacob’s Well, which is in the custody of the Greek Orthodox church.
Fr Ennis said that during the conference he spoke to Archbishop Pierbattista Pizzaballa, the acting patriarch of Jerusalem and former custos (head of the Custody) to the Holy Land. The archbishop took an interest in the wellbeing of South Africa, Fr Ennis said

The conference ended with Mass in St Catherine’s church in Bethlehem, which is attached to the church of the Nativity.