Catholic Political Analyst: What to Expect in 2019 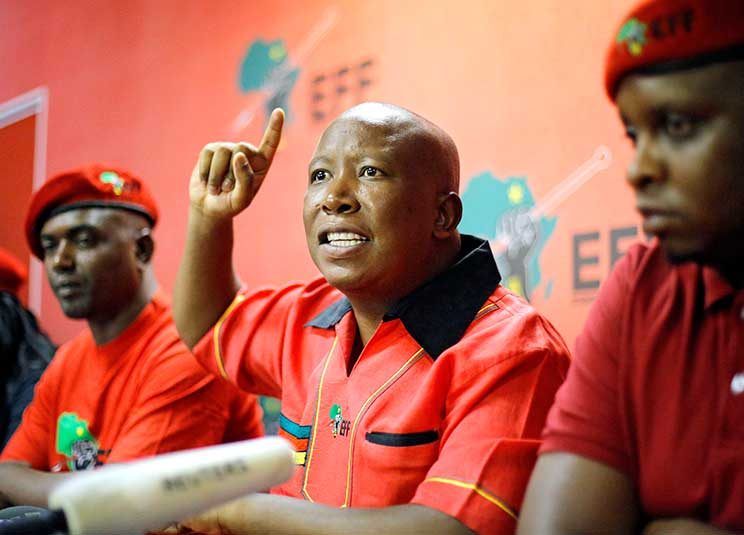 Julius Malema, leader of the Economic Freedom Fighters, makes a point. His party is facing an identity crisis after the departure of ex-President Zuma, and still has to convincingly rebut corruption allegations against its leaders. (Photo: Kim Lundbrook, EPA/CNS)

This year’s general elections will define South Africa’s year 2019, with the state of the economy, the on-going investigation into state capture and ex-President Jacob Zuma’s legal woes also playing roles, according to a Catholic political analyst.

The 2019 general elections will serve as an indication of what the country thinks about President Cyril Ramaphosa, who succeeded Mr Zuma in February 2018, according to Mike Pothier, programme manager of the Catholic Parliamentary Liaison Office.

“President Ramaphosa has embarked on a project to undo a lot of the damage of the Zuma years. If the ANC does not do well in the elections, then there will probably be a reaction against him within the party,” Mr Pothier said. In a polarised ANC, “Zuma sympathisers will say [Mr Ramaphosa] is not the man to run the party”.

However, strong electoral support will strengthen the president’s ability to appoint “ministers who share his feelings and who are hardworking”, and not be forced to include Zuma loyalists in his cabinet.
“The election will tell us whether he will be able to get the country on track,” Mr Pothier said.

The election will also test the main opposition parties, the Democratic Alliance and the Economic Freedom Fighters.

”We have seen in the last year the DA floundering and there are obviously leadership issues. I don’t know the causes of this but it could affect their ability to run a clear-cut campaign, which is something they have been good at in the past. So we may find that they are disadvantage by their own internal problems,” Mr Pothier said.

“The EFF is also dealing with a couple of challenges. On the one hand, they have lost their biggest political drawcard which was their opposition to Mr Zuma,” he said, noting that this has led to the party experiencing an identity crisis.

“President Zuma was their great target and, in a certain sense, their reason for being a party. Now that he is gone they have found it difficult to replace him. They have found the land issue, which is important but it isn’t as sensationalist as Zuma,” who was a vote-catcher for the EFF, Mr Pothier explained.

He added that the EFF is facing corruption allegations which its leadership has not convincingly rebutted.

“I have a sense that the electorate as a whole is very sensitive to these types of allegations, particularly because we have just come out of the Zuma era. People aren’t just going to dismiss or overlook these allegations,” Mr Pothier said, adding: “The same would go for any other party. People are sick and tired of corruption, and sick of seeing the political elite with getting away with it.”
Apart from the elections there are a number of commissions of inquiry which will continue in 2019.

There is the ongoing investigation into state capture, with reports and information yet to be revealed, as well as inquiries such as the Nugent Commission, which is looking into irregularities within the South African Revenue Services.

“Many of the fallouts and recommendations of these inquiries will be dealt with in 2019,” Mr Pothier predicted.

He also focussed on how the newly-appointed director of the National Prosecuting Authority, Shamila Batohi, will settle into her new position.
“She just has to turn around the NPA after many years of political interference and incompetence,” Mr Pothier said.

“Advocate Batohi has to rebuild the morale of the institution, and she also will have to make tough decisions about individual prosecutions. Chief among them is the prosecution of Jacob Zuma, but there are a number of prosecutions linked to the whole era of political corruption.”

Mr Pothier saw several encouraging movements for 2019. “Things like the commissions of inquiry and the appointment of what seems like a good head of the NPA are all positive,” he said. “It seems like there is a more open approach from President Ramaphosa. He has a much more transparent way of making appointments,” whereas before these were governed by political expedience. “That’s a big positive. “
Mr Pothier also noted that the economy appears to be “slightly picking up”, but cautioned that “it’s too early to be to positive about that”.