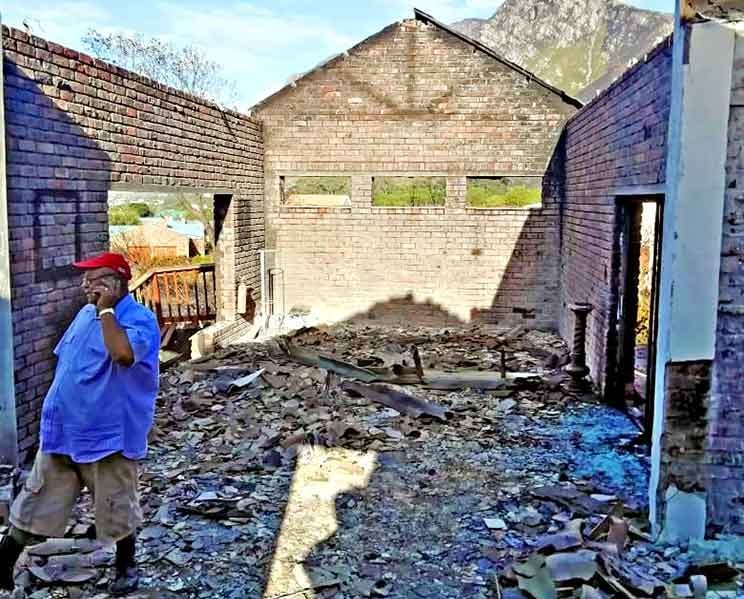 The small church of Our Lady of Montserrat in Betty’s Bay near Hermanus in the Western Cape was destroyed by the weeks-long wildfires that ravaged the Overberg area. (Photo from Anthony Harris)

A quick-thinking and brave parishioner rushed into a burning church to retrieve the tabernacle before the flames could reach it.

This was one of the small comforts Catholics could draw from after Our Lady of Montserrat church in Betty’s Bay, near Hermanus in the Western Cape, was totally destroyed in the devastating fires that tore through parts of the Overberg.

At least 31 properties were destroyed by weeks-long wildfires that started when a flare was shot off and landed in Kogelberg nature reserve during New Year’s Eve celebrations.

All that remains of Our Lady of Montserrat is the walls, a few metal structures and candle stands.

Fr Roger Hickley, former parish priest of Hermanus, said the destruction of the small church had left him “tearful and heartbroken”.

He described the chapel as “surely the loveliest” in its setting in the archdiocese of Cape Town.

Catholics and Anglicans Together

It was also used by Anglicans for many years.

“I fervently pray that Catholics and Anglicans will come together to rebuild, and that the thousands of holidaymakers who prayed there down the long years will contribute to its restoration,” Fr Hickley said.

The site was initially bought by Fr Jack Swan in the 1960s when he built his holiday home there. The church was later built attached to the side of his house.

From the 1970s the priest welcomed the Anglican community using the chapel for its liturgies.

“The house was not intended as a church. Initially Fr Swan began saying Mass on the veranda for the three Catholics who lived in Betty’s Bay then,” Fr Hickley said.

The Dutch Reformed parish in Betty’s Bay has offered its facilities to the parishioners of Our Lady of Montserrat to celebrate Mass.

Shelton April, 34, who allegedly set off the flare that started the fires, resulting in damages of millions of rands, faces a charge of contravening the National Environmental Management Act.