Stop the Exodus to Pentecostal Churches 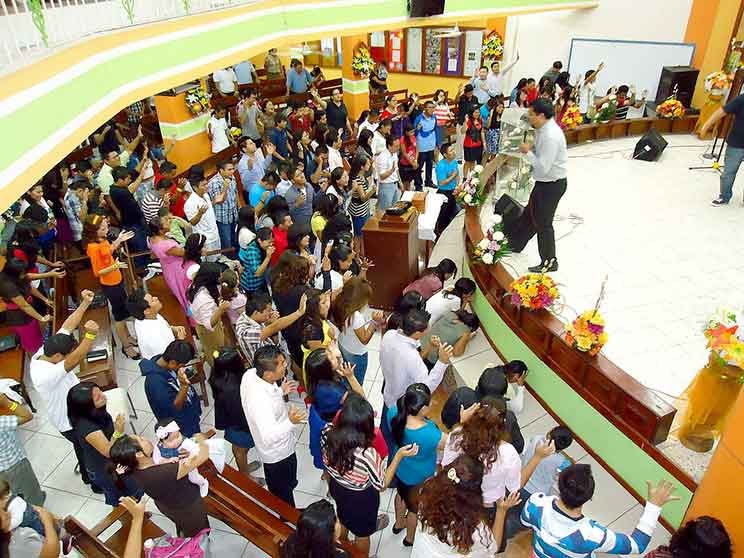 A Pentecostal worship service in Cancun, Mexico. In his article, Prof Michael Ogunu explains what qualities make Pentecostalism attractive to Catholics, and what the Church can do to stop the exodus of Catholics to these churches. (Photo: Wikipedia Commons)

In the second part of his article on Pentecostalism, PROF MICHAEL OGUNU discusses what attracts Catholics to Pentecostal churches, and what the Church can do about it.

Last week we looked at the origins of the Pentecostal movement, including the rise of the Catholic Charismatic Movement. This week we examine why Catholics drift to Pentecostal churches.

Any serious attempt at assessing the effects of Pentecostalism on the Catholic faithful must begin not only with an understanding of what Pentecostalism is but also with the basic issue of why Catholics go to Pentecostal churches.

There are various reasons why some Catholics leave their Church and go to Pentecostal churches.

The instrumentum laboris for the Second Synod for Africa, issued in 2009, mentions the following “attractions”:

Fr Donatus Udoette in a 1997 paper titled “The Catholic Charismatic Renewal of Nigeria in the age of the New Religious Movements” observed that among the outstanding characteristics of the new religious movements (including Pentecostals) which makes it possible for them to continue to proliferate, expand and attract members from the old mission churches are:

Let us examine these factors:

Many well-meaning Catholics have posited that one of the most important reasons why Catholics leave the Church and go to Pentecostal churches is the latter’s fulfilling mode of worship.

“Contrary to the rather dull, formalised and stylised mode of worship in the mainline Churches (including the Catholic Church), the new religious movements adopt a mode of worship which is dynamic and lively and which strongly appeals to Africans because it suits their socio-cultural context,” Fr Udoette said.

“Worship in these churches is uninhibited and exuberant; it can last for hours, and a large part of this time is spent shouting, singing, savaging, clapping, dancing, moving around the church.

“Some of the praying will be in tongues. Some congregants may be weeping, even in trance-like states.  The service is thoroughly experiential; it can truly be called a celebration.”

There is no doubt, said Fr Udoette, that such lively modes of worship are appealing to Africans who by nature are very lively and dynamic, and who have come to see the mainline Churches as dull, uninteresting, and incapable of carrying them along as Africans.

Centrality of the Bible

Pentecostals place a very high premium on the Bible as the word of God and as the centre and foundation of their religious and daily life.

They read the Bible assiduously, devouring and savouring every word. Pastors in these churches preach with their bibles in hand, and members attend services with their bibles, marking, underlining, and quoting relevant passages as their pastors indicate to them from the pulpit.

Some Catholics do not know and understand the Catholic faith they profess. All they know is what they learnt at Catechism classes for their baptism or confirmation.

Many do not even understand the Holy Eucharist (Holy Mass) and do not actively participate in it.

For such Catholics, the Holy Mass is a dull routine they are obliged to attend every Sunday in order not to go to hell.

Many Catholics go to Pentecostal churches because of the emphases these place on healing and wholeness which tallies with the traditional cosmological conception of the universe.

Many Africans believe that sickness is caused not by bacteria or by defective organs but by spiritual beings which work through people and events and through objects.

Whereas the mainline Churches sometimes neglect this traditional understanding of the causes of illness and misfortune, says Fr Udoette, the new religious movements accept them entirely and try spiritually to offer solutions in order to free people from their problems.

They recognise the existence of malignant spiritual powers, especially witches, who afflict people with various kinds of ailments. They also hold witches and evil spirits responsible for incurable diseases, and if any epidemic breaks out in a village or town, they attribute it to these evil forces or the ill-will of some people against others.

Prophecy and visions are elements in the Pentecostal churches which appeal very strongly to some Catholics.

These churches regard prophecy and visions as a means of looking into the future or of revealing the causes of what is actually happening in the present, such as sickness or misfortune.

“Prophets” in these churches claim to be specially inspired by God, and so act as God’s messengers or vice-regents to the people. Their words are not doubted since they are believed to be agents of God who speak with the authority of God himself.

Some Catholics go to Pentecostal churches because of the seeming inability or unpreparedness of their Church to fill the void in their lives.

In the urban areas, where individualism and anonymity reign, Pentecostal churches provide solace for the lonely and comfort for the broken hearted.

Members of these Churches are called to regard one another as brothers and sisters and to encourage, support and sympathise with one another in difficult circumstances.

Visiting of the sick members of these churches, for example, is not left to their pastors but is the business of anybody who feels called individually “to rejoice with those who weep”. In this way relationships are transformed and people really feel wanted and at home with one another.

People leave the Catholic Church because of lack of enough concern for Church members in times of difficulty. Sometimes, the impression is given that all the Church is interested in is to collect money (levies, dues, and so on) from members, and nothing more.

Closely allied to the above is bad leadership. Cruelty, insensitivity, gross materialism, tribalism, poor human relations, financial mismanagement or misappropriation and moral scandal are some of the ills that turn the weary pilgrim away from the Church to wherever else they believe salvation can be found.

Some leave because they do not see in the Catholic Church enough manifestation of the power of God.

There are others who leave because they find the doctrines and teachings of the Church especially on marriage (indissolubility) too hard for them to follow.

There are also many who are looking for immediate solutions to their problems, and the Pentecostal churches promise to find these.

These Churches practise positive thinking, linked to the promises made by God in the Bible.

So by the time a few of the problems of the weak Catholics are solved by fasting and prayer, they then build up their own faith and confidence in the word of God by studying the Bible more.

What can we do to stop the exodus of Catholics to Pentecostal churches?

It seems obvious that Pentecostalism poses a real danger to the Catholic faithful in Africa, who are exposed to the various devices aimed at winning them over.

The following measures are recommended to stop the drift:

There should be greater involvement of priests in the lives of the faithful.

Efforts should be made to reach out to Church members and help fill the void in the various areas of their lives.

To this end, counselling centres should be set up in each parish and a sound counselling programme installed to enable priests to attend to the spiritual and other needs of parishioners.

The Church should show more concern for the needs of its members. To this end, time should be created for counselling and prayers.

There are many Catholics who flock to prayer houses and prophets for counselling and prayers. Some of the conditions include that they should change their faith.

As part of the concern, there should be visitation teams and the Small Christian Communities should be made more active.

The Church should make it mandatory for all parishes to have Bible classes for children and adults outside the Scripture reading periods at Mass.

Only Catholics of unquestionable orthodoxy should be in charge of such classes.

The Bible classes should be used as avenues of explaining the Mass and Catholic faith and doctrine. There should be a continuous study of the Catholic doctrines, especially during the Mass and other Church celebrations. Emphasis should be placed on those controversial aspects of the doctrine.

Also, seminars and workshops on the Catholic faith should be encouraged in Catholic churches.

Priests and Church leaders should spend more time talking about the Word of God, especially at Mass, rather than focusing on other things such as money, tithes and seed-sowing.

The Sunday-to-Sunday word of God which Catholics hear when they attend Mass is totally insufficient. Bible reading/study should be a mandatory part of all zonal meetings and Church societies.

Church bulletins should carry not just Bible readings but also explanations of the readings, or periodicals which publish these (such as The Southern Cross) should be vigorously promoted.

The faithful should be given adequate education on the teachings of the Church. Short-term programmes (ranging from three months to a year) designed to give theological education to the laity should be set up or encouraged.

Outreach programmes—such as Rosary crusades and carnivals, seminars, workshops, and so on—aimed at the spiritual enrichment of Catholics should be organised at parish, deanery and diocesan levels.

There should be greater integration of youths in the life of the Church, especially at the parish level.

Devotion to the Blessed Virgin Mary should be intensified.

More positive encouragement should be given to the daily recitation of the Rosary and the practice of Five First Saturdays devotion of reparation to the Immaculate Heart of Mary.

Rosary walks, crusades and carnivals should be regular features in the programme of parishes and deaneries.