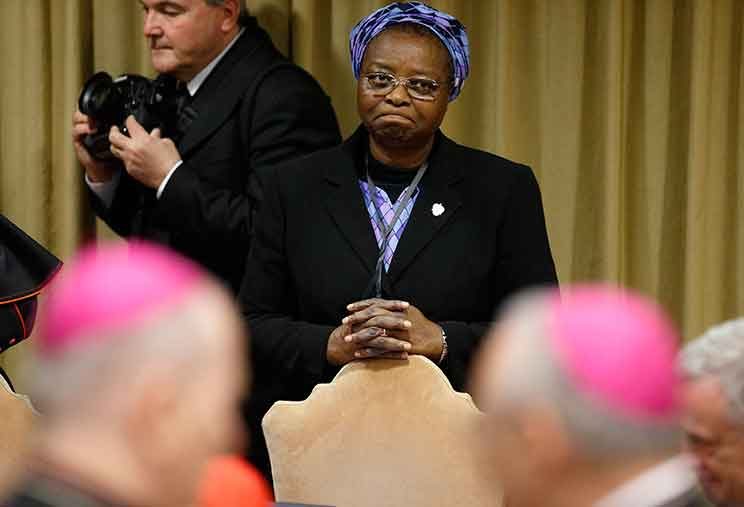 Nigerian Sister Veronica Openibo, congregational leader of the Society of the Holy Child Jesus, attends the third day of the meeting on the protection of minors in the church at the Vatican Feb. 23, 2019. Sister Openibo told the gathering that clerical sexual abuse “has reduced the credibility of the church when transparency should the hallmark of mission as followers of Jesus Christ.” (CNS photo/Paul Haring)

The hypocrisy of Catholic leaders who claimed to be guardians of morality yet remained silent about clerical sexual abuse has left the church’s credibility in shambles, an African woman religious told bishops at the Vatican summit on abuse.

“Yes, we proclaim the Ten Commandments and ‘parade ourselves’ as being the custodians of moral standards-values and good behaviour in society. Hypocrites at times? Yes! Why did we keep silent for so long?” asked Nigerian Sister Veronica Openibo, congregational leader of the Society of the Holy Child Jesus.

Addressing Pope Francis and nearly 190 representatives of the world’s bishops’ conferences and religious orders Feb. 23, Sister Openibo insisted the church needed to be transparent and open in facing the abuse crisis.

In a poignant yet powerful speech, the Nigerian sister reminded the bishops of the church’s universal mission to be a light for the world and a “manifestation of the Christ we know as both human and divine.”

However, she said, the “widespread and systemic” sexual abuse of children by clergy and the subsequent cover-up have “seriously clouded the grace of the Christ-mission.”

Clerical sex abuse, she said, “is a crisis that has reduced the credibility of the church when transparency should be the hallmark of mission as followers of Jesus Christ. The fact that many accuse the Catholic Church today of negligence is disturbing.”

She also called out bishops, particularly in Asia and her native Africa, who dismiss the abuse crisis as a Western problem, citing several personal experiences she confronted while counseling men and women who were abused.

“The fact that there are huge issues of poverty, illness, war and violence in some countries in the global South does not mean that the area of sexual abuse should be downplayed or ignored. The church has to be pro-active in facing it,” she said.

Church leaders cannot think they can “keep silent until the storm has passed,” Sister Openibo told them. “This storm will not pass by.”

Outlining steps the Catholic Church can take to move toward true transparency and healing, she suggested beginning with the admission of wrongdoing and publishing “what has been done since the time of Pope John Paul II.”

“It may not be sufficient in the eyes of many, but it will show that the church had not been totally silent,” she said.

Along with clear and comprehensive safeguarding policies in every diocese and devoting resources to help survivors heal from their suffering, Sister Openibo said the church also must give seminarians and male and female novices a “clear and balanced education and training” about sexuality and boundaries.

“It worries me when I see in Rome, and elsewhere, the youngest seminarians being treated as though they are more special than everyone else, thus encouraging them to assume — from the beginning of their training – exalted ideas about their status,” she said.

Religious women also are susceptible to a way of thinking that leads to “a false sense of superiority over their lay sisters and brothers,” she added.

“What damage has that thinking done to the mission of the church? Have we forgotten the reminder by Vatican II in ‘Gaudium et Spes’ of the universal call to holiness?” she asked.

Looking toward Pope Francis seated on the dais near here, Sister Openibo spoke directly about his initial denial and subsequent about-face regarding the abuse crisis in Chile and accusations of cover-up made against bishops.

“I admire you, Brother Francis, for taking time as a true Jesuit, to discern and be humble enough to change your mind, to apologize and take action — an example for all of us,” she told the pope.

Transparency, she said, also will mean treating equally all clerics who abuse children and not shying away from acknowledging the names of abusers, even if they are high-ranking churchmen or already have died.

“The excuse that respect be given to some priests by virtue of their advanced years and hierarchical position is unacceptable,” she said.

Of course, “we can feel sad” for clerics whose offenses are being brought out into the open, Sister Openibo said, “but my heart bleeds for many of the victims who have lived with the misplaced shame and guilt of repeated violations for years.”

By protecting children, seeking justice for survivors and taking the necessary steps toward zero tolerance of sexual abuse, she said, the Catholic Church can fulfill its mission to preach the good news, announce deliverance to the captives and “proclaim the Lord’s year of favor.”

“This is our year of favour,” she said. “Let us courageously take up the responsibility to be truly transparent and accountable.” By Junno Arocho Esteves Catholic News Service