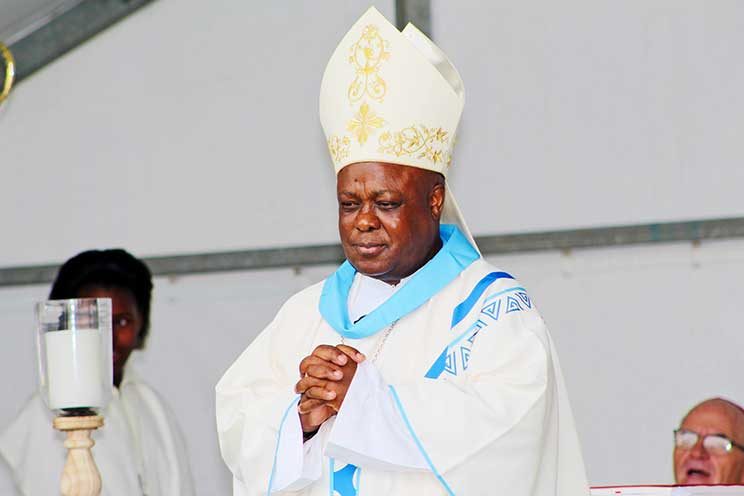 The new coadjutor archbishop of Durban has thanked God for his parents, saying his mother should have been the one ordained.

Speaking to Radio Veritas’ Khanya Litabe, Archbishop Abel Gabuza recalled the Mass of his reception as coadjutor archbishop of Durban, a position that gives him automatic succession as head of the archdiocese the moment Pope Francis accepts the resignation of the incumbent, Cardinal Wilfrid Napier, who will turn 78 in March.

Wearing the vestments issued to clergy at the closing Mass of January’s World Youth Day in Panama City, the former bishop of Kimberley was received into the Durban archdiocese during a service hosted by St Henry’s Marist College.

Archbishop Buti Tlhagale of Johannesburg preached the homily, in which he strongly attacked xenophobia in South Africa.

In his address, Archbishop Gabuza spoke not only of the people of Durban, but also of those in his old diocese of Kimberley, the archdiocese of Pretoria, where he long served as priest and vicar-general, and Alexandra in Johannesburg, where he was born and grew up.

Speaking on Radio Veritas, Archbishop Gabuza said that his gratitude goes foremost to God, for giving him the kind of parents he had. “My mother was an important example to me. I always say to people, if it was possible, my mother would be the one who would be ordained,” he said.

“I’m thankful to Pope Francis for having the confidence in me,” the archbishop added.

Archbishop Gabuza said he was tremendously humbled that so many people came to his reception.

“I had friends and my family attend, and so many people from other parts of South Africa who expressed their good wishes — but particularly the people from Durban who showed me such a warm welcome and reception, I’m so grateful to everyone who showed me love.”

The archbishop said his first impression of Durban was that it is a huge archdiocese, with much history. “Many men and woman have contributed to the growth of this diocese and it simply means I will have to learn a great deal from the rich history,” he said.

“It’s different to where I come from. In Kimberley, we had only three staff members in the chancery.

“When I was introduced to the chancery [in Durban], there were about 16 men and woman, and I felt a little intimidated,” Archbishop Gabuza said.

“Now we have this wonderful structure; I hope this is going to be good for me and I hope I’ll be able to do what I should do as a bishop,” he said.

The archbishop also hopes he will not spend too much time sitting behind a desk, though “it is important for me to do that, but not as I did when I was in Kimberley. Here it will be quite different.”

Archbishop Gabuza noted that pastoral visits in Kimberley involved travelling long distances; in Durban “it will be much better because places are closer. So for that, I’m very grateful.”