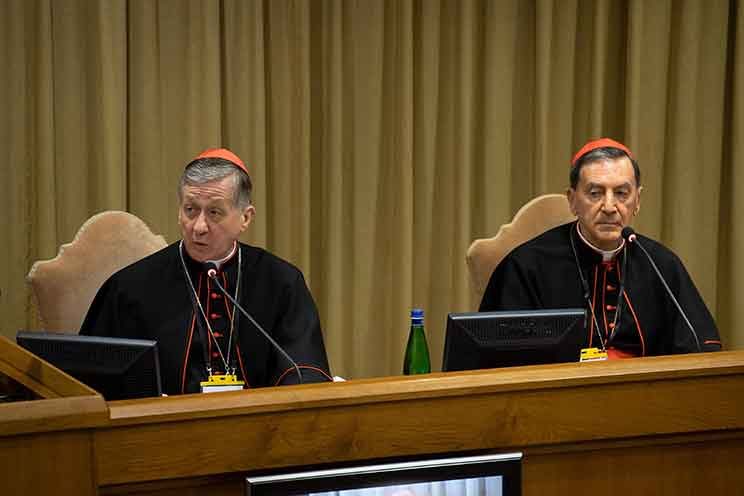 Cardinal Blase J. Cupich of Chicago and Cardinal Ruben Salazar Gomez of Bogota, Colombia, attend the second day of the meeting on the protection of minors in the church, at the Vatican Feb. 22, 2019. (CNS photo/Vatican Media)

Addressing Pope Francis and some 190 presidents of bishops’ conferences, heads of Eastern Catholic churches, religious superiors and officials of the Roman Curia Feb. 22, Cardinal Cupich provided details of what some people have described as a “metropolitan model” of accountability, although he insisted the model would involve laypeople.

Church territories are grouped into provinces with an archdiocese, which is the metropolitan see, and neighbouring dioceses. Under the current law governing the Latin-rite church, the archbishop or cardinal leading the metropolitan see has very little responsibility for the province; that would change under Cardinal Cupich’s proposal.

The guidelines also would name an alternate – perhaps the neighbouring metropolitan or the senior diocesan bishop – in cases where the accused is the metropolitan archbishop.

The proposal made by Cardinal Cupich at the Vatican summit on child protection and the clerical abuse scandal was similar to one he made in November to the full U.S. Conference of Catholic Bishops.

The cardinal also included elements of proposals the U.S. bishops had planned to vote on in November, but the Vatican had asked them to hold off until after the Feb. 21-24 Vatican summit. The common elements included setting up a toll-free number or website for reporting bishops and establishing a fund to pay for investigations of bishops accused of abuse or negligence.

The Chicago prelate told reporters later that his presentation had two main differences from what the U.S. bishops initially proposed: using metropolitans gives the process a regional character that is especially important for ensuring outreach to and follow up with the victim; and the U.S. bishops’ proposal was voluntary, whereas his would be obligatory.

Responding to questions about trusting bishops to investigate brother bishops, Cardinal Cupich said that is another reason why he insisted laypeople be involved in receiving and investigating allegations; it is essential for the transparency of the system.

Cardinal Cupich’s presentation at the summit focused on increasing accountability but doing so in a “synodal” fashion by including laypeople “in a discernment and reform that penetrates throughout the church” and by formulating laws and procedures that flow from the church’s reality as a spiritual institution.

“We must move to establish robust laws and structures regarding the accountability of bishops precisely to supply with a new soul the institutional reality of the church’s discipline on sexual abuse,” the cardinal told the summit.

Cardinal Cupich said the need for a system where bishops, aided by lay experts, hold other bishops accountable could be seen in the events of “this past year,” presumably referring to the Pennsylvania grand jury report on abuse and the case of former Cardinal Theodore E. McCarrick, who, in 2018, was found to be credibly accused of the sexual abuse of a minor and was dismissed from the clerical state in February after being found guilty.

“This past year has taught us that the systematic failures in holding clerics of all rank responsible are due in large measure to flaws in the way we interact and communicate with each other in the College of Bishops in union with the successor of Peter,” Cardinal Cupich said.

Before the summit began, each participant was asked to meet with and listen to a survivor or survivors of abuse. The meeting included testimony from survivors, and the main speakers and the survivors gathered outside the meeting all insisted that listening to the victims is the first step.

The listening is not a courtesy and must not include conditions being placed on the survivors, the cardinal said. “Our listening must be willing to accept challenge and confrontation and even condemnation for the church’s past and present failures to keep safe the most precious of the Lord’s flock.”

In general, Cardinal Cupich suggested each bishops’ conference “establish standards for conducting the investigations of bishops,” which, he said, “should involve and consult lay experts.”

The Catholic faithful should know how to report allegations of abuse or negligence involving a bishop, he said, and should involve “independent reporting mechanisms in the form of a dedicated telephone line and-or web portal service to receive and transmit the allegations directly to the apostolic nuncio,” who is the pope’s representative in the country, and to the metropolitan or to a panel of lay experts, depending on the system designed by the local bishops.

Cardinal Cupich’s model mirrored in many ways the procedure used for investigating an allegation against a priest. He would have a metropolitan archbishop and lay review board, or at least lay experts, conduct an initial review of the allegations. If the allegation seemed credible – or as the cardinal said, “has even the semblance of truth” – the metropolitan would request from the Vatican the authority to begin a full investigation; the Vatican approval is necessary because, according to church law, only the pope investigate and discipline a bishop.

The results of the full investigation would be forwarded to the Vatican, which determines whether a trial is warranted and how it should be conducted.

Archbishop Charles Scicluna of Malta, who handles abuse cases as adjunct secretary of the Congregation for the Doctrine of the Faith, told reporters later, “the supreme pontiff — the pope — has a special jurisdiction over the bishops that has to be respected.”

At the same time, he said, “it is within the context of communion that we have to live accountability,” which means other bishops and laypeople always must be involved. –By Cindy Wooden Catholic News Service