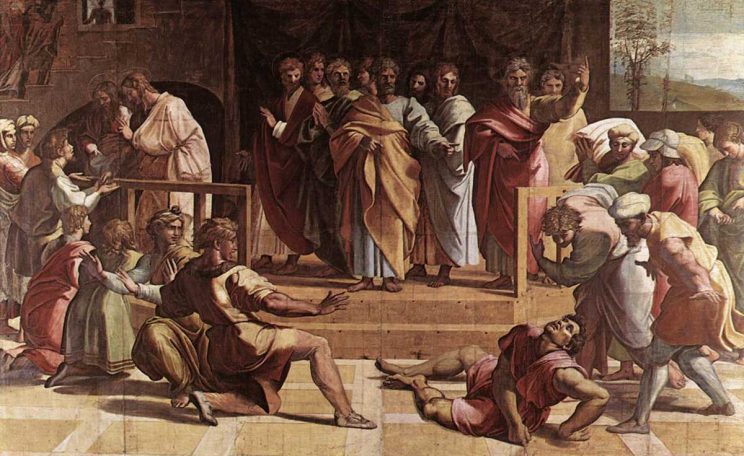 The death of Ananias by Raphael (wikipedia)

Guest Editorial By Michael Shackleton – Corruption is the catchword of the day. It is not a new word. It has appeared in many history books describing the perennial dishonesty and downfall of empires and individuals.

Awareness of this phenomenon is now escalating. Internationally it is being recognised as having a significantly serious economic impact on nations and their citizens.

Public money legitimately collected in taxation from people in the street is finding its way into the private pockets of deceitful officials.

In 2006 the Pontifical Council for Justice and Peace held a conference titled “The Fight against Corruption”, defining corruption as the abuse of entrusted power for private gain which hurts everyone who depends on the integrity of people in positions of authority.

Corrupt practices are found even in the New Testament. A pertinent example is that related in Acts 5 where the disciples shared their possessions so that everything was held in common for the common good.

When Ananias and his wife Sapphira sold their property to pass its value into the common fund, they handed over only a portion of the value. They retained the rest for themselves and lied to the others that what they had presented was the full sum realised.

Their punishment for the deception was swift and absolute. Peter’s rebuke was that they had not simply cheated human beings but had cheated God.

Christians today must feel the same way. All forms of deception in which individuals or groups hijack the means to the common good for their own private good are an attempt to cheat God.

Bribery, graft, extortion, nepotism, patronage, human and drug trafficking, money laundering, and the like are familiar examples of corruption. But their perpetrators do not necessarily see their wrongdoing as a way of cheating God who is Truth and who cannot deceive or be deceived.

Corrupt officials in politics, commerce and trade can be caught out by the law of the land. However, they often escape jail terms because the law itself is corruptible. What may be illegal is not consistently recognised as immoral.

Downright dishonest practices do not only place a heavy burden on a people’s economic growth. They also cause a deep distrust of and disrespect for public institutions.

When these kinds of conditions prevail and become socially tolerable, the Church must react in the name of justice and morality. Consciences must never be numbed to the point of inertia.

The Pontifical Council for Justice and Peace appealed to the Church’s social doctrine as a guiding principle in the battle against injustice.

Corruption, it declared, exploits human persons and uses them for selfish interests. It is an obstacle for achieving the good of all citizens because it is based on individualistic criteria of selfish cynicism and illicit special interests.

In nutshell, corrupt practices that benefit a powerful elite to the detriment of the less powerful are not only illegal but also inherently immoral and, in the Church’s book, sinful.

Clever lawyers protect clever rogues in the courts of justice. In our own land, as well as beyond, the Church’s mission is to spell out to the corrupt elite that neither their fellow citizens nor God himself can be cheated.