Pope Francis: Optional Celibacy for Priests “Not a Good Idea” 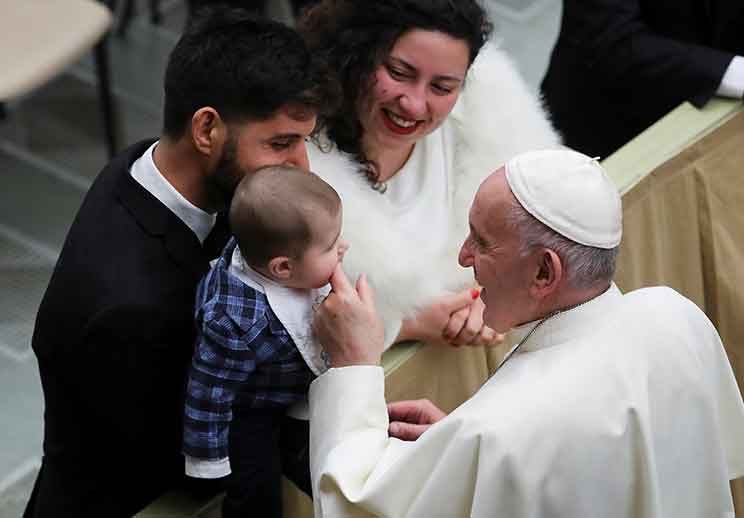 Pope Francis plays with a baby during his general audience in Paul VI hall at the Vatican. (CNS photo/Philimon Bulawayo, Reuters

Many people were surprised when Pope Francis told reporters flying with him from Panama that he did not think optional celibacy for priests in the Latin-rite church was a good idea.

“Personally, I believe that celibacy is a gift to the church,” the pope said. “Second, I’m not in agreement with allowing optional celibacy.”

But before that and before really getting into the question, he told reporters, “A phrase St. Paul VI said comes to mind: ‘I would rather give my life than to change the law on celibacy.'”

“My personal opinion” is that optional celibacy is not the way forward, the pope told reporters. “Am I someone who is closed? Maybe, but I don’t feel like I could stand before God with this decision.”

However, he did say “there could be some possibility” of ordaining married men in very remote locations where there are Catholic communities that seldom have Mass because there are no priests. But, even for that situation, much study would need to be done.

His caution surprised both those who suspected that Pope Francis would be happy to relax the discipline of celibacy and those who hoped he would.

Both groups expected that some movement on the issue was in the cards when Pope Francis announced he was convoking a special Synod of Bishops to focus on the Amazon, a region where far-flung Catholic communities often go without the Mass and other sacraments for weeks on end.

A few bishops from the region repeatedly have raised the question of ordaining married “viri probati” — men of proven virtue — at synods of bishops as far back as 1971 when the topic was “the ministerial priesthood.”

While the proposal has never garnered the support of the majority of bishops at a synod, it keeps featuring in synod discussions.

At the synod on the Eucharist in 2005, for example, one of the propositions submitted to Pope Benedict XVI described the lack of priests as a cause of “acute pain.” But it added: “In this context, the synod fathers affirmed the importance of the inestimable gift of ecclesiastical celibacy in the practice of the Latin church.”

“Some participants made reference to ‘viri probati,’ but in the end, the small-discussion groups evaluated this hypothesis as a road not to follow,” the proposition to the pope said. Instead, the bishops called for greater efforts to foster vocations to the priesthood.

The terms “viri probati” and “married priests” do not appear in the preparatory document for the synod on the Amazon, which is scheduled for October. But it does say, “new ways should be considered for the People of God to have better and more frequent access to the Eucharist, the center of Christian life,” and it asks bishops to make suggestions “to respond to this need.”

Giving a sense that he was thinking aloud about specific circumstances where married men could be ordained priests, Pope Francis told reporters on the late January flight that he had read a book on the subject by Bishop Fritz Lobinger, a 90-year-old German missionary and retired bishop of Aliwal, South Africa.

Bishop Lobinger has written several books and dozens of articles about ordaining elders, including married men, when they arise organically from a Catholic community where Mass is rarely celebrated. In his writings, the bishop insists that the ordained elders should be distinct from, and mentored by, diocesan clergy.

Explaining his thoughts in an article published in U.S. Catholic magazine in March 2010, Bishop Lobinger said, “The two kinds (of priests) would exercise two different roles. The elders would lead the community and administer the sacraments in their own community, while the (diocesan) priests would be the spiritual guides of elders in several self-ministering communities. The priests would thus serve the whole diocese, while the elders would serve only the community where they were ordained.”

Pope Francis told reporters he found “interesting” Bishop Lobinger’s proposal that diocesan priests and ordained elders would have different roles. Pope Francis described the difference using the traditional “tria munera” or three ministries conferred by ordination: the ministries of teaching, sanctifying and governing. He said in his understanding of Bishop Lobinger’s proposal, ordained elders would be charged by the bishop with only the “munera” of sanctifying the people by leading prayer and celebrating the sacraments.

But, in a telephone interview Jan. 30, Bishop Lobinger told Catholic News Service, “I was surprised and shocked that he spoke of the ‘tria munera.’ I did not use these terms and, secondly, it would seem to strip down the meaning of ordination” conferred on the elders.

But “that was his interpretation,” the bishop said. “This is a time of moving into new territory and one must find a way. In the end, it should depend on the local community” and how it organises its life within the larger church.

Even after explaining how he understood the bishop’s thesis, Pope Francis told reporters, “I don’t say this must be done because I have not reflected on it, I have not prayed enough (about it), but it’s something for theologians to study.”

Bishop Lobinger told CNS he is convinced that a good portion of that reflection, prayer and study will be evident at the Amazon synod and that Pope Francis “is really steering the church in that direction.”

The bishop has never argued for optional celibacy for all priests. In fact, in his 2003 book “Priests for Tomorrow,” he said that if implemented carefully and with clear explanations to the Catholic faithful, the ordination of the elders would increase people’s appreciation for diocesan priests who, unlike the elders, give everything to serve the Lord and God’s people.

The “totally dedicated priest,” he wrote, would be appreciated not as a “dispenser of religious services,” but “as the spiritual heart of the body of believers.” – By Cindy Wooden Catholic News Service