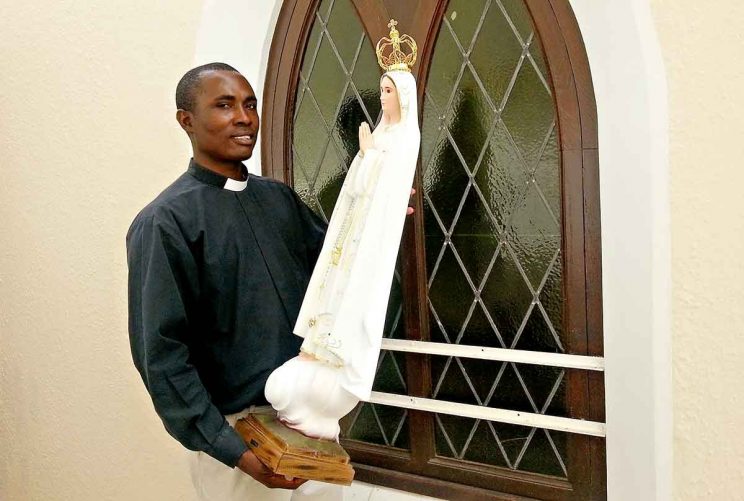 Fr Thaddeus Oranusi, then of Kuils River, Cape Town, which was among the first to receive a statue of Our Lady of Fatima donated by José Camara. One of the conditions of receiving a statue was that the recipient parish would recite the Rosary as a community from May through to October on the 13th of each month.

A Portugal-based businessman who has donated 1250 statues of Our Lady of Fatima to parishes and institutions around the world is inviting parishes and schools to apply for one of the last 50 statues he will give away.

The applicants will have to cover the cost of freight, said formerly Cape Town-based José Camara, but he will take care of all the other costs, taxes and paperwork on his side.

In return for his donation of the handpainted statues, which are made in Fatima, recipient parishes and schools must undertake to recite the Rosary once a week with families in their communities and promote the First Saturdays devotion.

The statues are available in sizes of 70cm and 55cm, and are suitable for indoor use only.

Mr Camara said he will consider only applications from priests on parish letterheads.

He said that in the past he had received many fraudulent applications, but after having sent more than a thousand statues around the world, he has acquired a knack for spotting fake applications.

His mission of donating the statues as a way of promoting devotion to Our Lady of Fatima began in January 2013 with an offer in The Southern Cross to give away 12 statues to parishes in South Africa.

Demand was high, and from there his mission spread first to other countries in Southern Africa and eventually all around the world.

Mr Camara has sent Our Lady of Fatima to 47 countries as far apart as Saudi Arabia, Japan, Haiti, Britain, Australia, Mozambique, and India.

To apply for a statue, or to request prayers and other material to assist parishes in establishing the Five First Saturdays devotion, contact Mr Camara at jjvcamara@gmail.com

Why Schoenstatt Gave Our Lady a New Crown