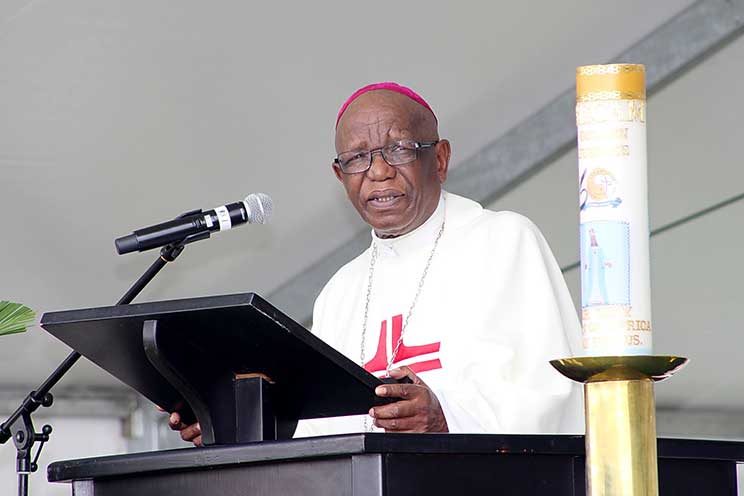 When we fail to welcome the migrant and the refugee, we fail the Gospel, according to ARCHBISHOP BUTI TLHAGALE OMI of Johannesburg.

We all belong to one Father who created us in his image. This year we celebrate the 50th anniversary of the Symposium of the Episcopal Conferences of Africa and Madagascar (SECAM)—to remind ourselves of that reality of a collective belonging.

The nations no longer stand together. The image of our common belonging and common origins is no longer visible.

Is it perhaps the long and arduous journey through time that has made us strangers to each other—or even worse, enemies to each other?

The truth is, today we human beings appear to have been made in the image of the biblical Cain. We appear to be thirsty for each other’s blood. We seem to delight in inflicting pain on each other.

Race, nationality, ethnicity, culture and religion—these are the ideological walls we build in order to keep the unwanted people away from us.

Do you remember the Berlin Wall? Now see the obnoxious wall in Bethlehem that keeps the Palestinians at bay? Listen to the distressing debate on the Mexican-US border!

St Paul uses the analogy of the body: “God has formed the body together, giving all the more honour to the least members so that there is no bodily rupture and members are mutually concerned about one another” (1 Cor 12:24).

This powerful metaphor acknowledges the rich diversity of members and calls for mutual- recognition and collaboration. But these words of scripture do not appear to have moved our hearts. They are, regrettably, like water off a duck’s back.

We are enjoined to embrace each other, to embrace the stranger with warmth because of the inborn love we possess in our hearts.

We ought to accept people as they are, because they are people. We are moved by their plight and seek to be hospitable; to soften the blow of their predicament. That is what we would wish them to do for us, were we to find ourselves in a similar situation.

At any rate, we show kindness and mercy because these virtues are the hallmark of being truly human and of being truly Christian. These are in fact the qualities of God himself.

The essence of love

For St Paul, this is in fact the very essence of love. This is the power of God poured into our hearts by the Holy Spirit (Rom 5:5).

Reaching out to those who are in search of a home and in search of the basic necessities of life, is in fact showing love to a neighbour, “loving one’s neighbour as oneself”.

One shows compassion to migrants and refugees because they are pushed from pillar to post. They are blamed for the tardiness and even incompetence of the local people. They are called names and castigated simply because they genuinely seek better opportunities for themselves and for their children.

Some of them have taken great risks in leaving their own countries. They have fled wars and persecutions. They have fled hunger and lack of opportunities. They have made the ultimate sacrifice a man or woman can make for his or her family; to rise, to cross boundaries, to move into unknown lands and countries, and seek to establish oneself.

It takes a specific courage for  people to uproot themselves from their country of birth in order to find a home elsewhere.

Migrants and refugees are thus the vulnerable people of our society. They are like the many women and children in our communities who bear the brunt of abusive men.

Migrants and refugees are the ones whom Christ calls the least of my brothers and sisters. “When you show any kindness to them, you show it to me” (Mt 25).

Many receive slave wages and are continuously threatened with arrest. Some are victims of corrupt police officials.

And, as if that was not enough, many have been victims of xenophobia.

When local communities go on a service delivery protest, they take out their anger on foreign nationals. They harass them, attack them, destroy and loot their shops. It is most unfair for migrants and refugees to be made scapegoats for the glaring shortcomings of the government and local authorities.

There are also those within the migrant community who give migrants and refugees a bad name. There are those who are heavily involved in drug-trafficking.

Drugs have become a scourge in some of our communities. Thus the palpable anger of the communities is understandable.

There are also those migrants who are involved in robberies and human trafficking.

But these aberrations by some should not lead to the wholesale condemnation of the entire community of migrants and refugees.

The freedom of individuals to host migrants and refugees in their homes should be protected and promoted.

But, realistically, local families are themselves under tremendous pressure because of the shortage of housing. The rapid expansion of informal settlements attests to the chronic shortage of land and residential areas.

It makes ample sense for the Church to promote welfare institutions that will be of service to migrants.

The efforts of non-governmental organisations and other religious institutions need to be strengthened in their serious attempt to alleviate the plight of migrants and refugees.

As Church, as Christians, we are concerned with relieving human suffering and enhancing human wellbeing on a large scale. Every person, irrespective of origins, deserves to be given a chance, a golden opportunity to make ends meet, to take care of their family.

This is what the golden rule of the Gospel demands: to go out of our way to serve others. To do to others what we would greatly appreciate, if it were done to us.

The parable of the Good Samaritan cautions us “not to worry about who deserves to be cared for”. Rather, we should be concerned about us, ourselves, becoming persons “who treat everyone we meet with dignity, respect and compassion”. This is the heart of the Gospel message.

In the parable of Mary, Martha and Lazarus, Jesus says: “Mary has chosen the better part”—the listening part. Here the emphasis of Jesus falls not on providing a service, such as in the case of Martha, but on receiving a gift, that is, receiving the other person who comes into our space. This person, this migrant or refugee, is a messenger of grace.

We are encouraged to see not the migrant—the other unknown person—as a threat, a rival, a competitor. No, we should see the other as a blessing in disguise; as an opportunity or as an instrument that brings the best out of us, making us worthy of being called: human beings with a heart.

It has often been said that if we are not going to be helpful to others, at least we should not harm or hurt them. We should not burn their houses, destroy their properties, loot their shops or inflict pain on their persons.

The grave sin we commit in our times, is the sin of indifference to the plight of others.

We walk on the other side of the road like the priest and the Levite in the parable of the Good Samaritan. We don’t want to see, we don’t want to know.

We carry around with us hearts of stone. We measure the worth of persons by applying the misguided criteria of race, nationality, culture and religion.

When we discriminate against our fellow Africans, we betray our own humanity; we diminish our own honour and worth as human persons. We obscure the image of God imprinted on our faces and in our hearts.

The fact is, we are creatures that find our perfection only by establishing a relationship with others. It is this mutuality that makes us truly human.

It is a mutual relationship that cuts across man-made boundaries, geographical frontiers, cultural fault-lines and racial divides. Person-to-person relationships, irrespective of origin, language, race or culture, are generally warm and pleasant.

Relationships are poisoned by a prejudice that is embedded in society.

St Paul, writing to the Galatians, reminds us that we are all sons and daughters of God: “All of you have been baptised into Christ. Therefore there is neither Jew nor Greek, slave nor free, male nor female. We are all heirs according to the promise” (3:26).

We must learn to bring down the walls among us, embrace each other and “do as God would want us to”. This is the moral posture and attitude human beings should assume.

We owe this one to ourselves.

This is a slightly edited version of Archbishop Tlhagale’s homily at the Mass of the Southern African celebration of the 50th anniversary of the Symposium of the Episcopal Conferences of Africa and Madagascar (SECAM), held at St Henry’s College in Durban.