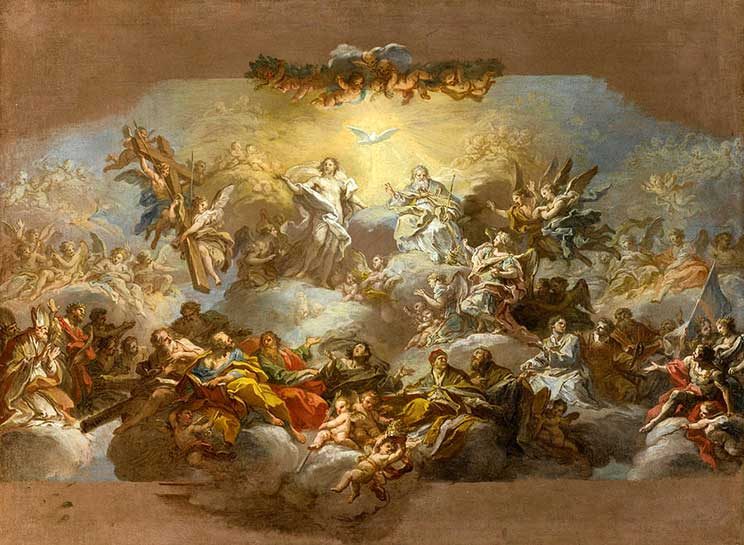 The Holy Trinity and Saints by Sebastiano Conca

The Holy Trinity is a mystery to the human intelligence yet it is an article of our Christian faith. I know the three divine persons are mentioned individually in the New Testament. At what later stage did the Church formulate the doctrine that the Son proceeds from the Father and the Holy Spirit proceeds from them both together yet they are simultaneously one God? Kiko Graf

The expression of the faith of the old Israelites, “Hear, O Israel, the Lord our God is one God” (Dt 6:4), is continued among Jews to this day, and we Christians embrace it entirely.

Early believers had to think hard about how this article of faith could be reconciled with the New Testament’s revelation of Father, Son and Holy Spirit each absorbed into the one Godhead.

St Paul, as an orthodox Jew, surely had to wrestle with Jesus’ revelation of this apparent contradiction. He accepted it and referred to the three persons frequently in many passages of his writings.

In the fourth century, influenced by concepts from Greek philosophy, St Basil the Great of Caesarea and those who shared his theological outlook, explained that the one God is a single substance having three distinct and simultaneous ways of existing. Each of these flows into the others and binds them into one.

This was enlightening because it gave us a fresh glimpse of the mysterious inner life of God’s being.

The Nicene Creed, dating from 325, which we recite at Sunday Mass, comes from these times. It affirms that Christ is consubstantial with the Father and that the Holy Spirit is also Lord who proceeds from the Father and the Son who with them is adored and glorified. Together, they constitute the divine substance.

St Augustine of Hippo (354-430) tried to dig deeper into the mystery when he came up with his “psychological model” of the Trinity. Our mind, he proposed, while remaining one single reality, is aware of itself, can understand itself and loves itself. God too has self-awareness (Father), self-understanding (Son) and self-love (Holy Spirit). It is this inner love which is essential to Trinitarian life.

The 12th-century Scottish theologian Richard of the monastery of St Victor speculated that the Trinity might be less incomprehensible if we think of a man and a woman who love each other. The fruit of that love is a child who shares the same love with them: an analogy of the perfect love of Father, Son and Holy Spirit.

The bedrock of our faith in the mystery of the Trinity is that there is one God in three distinct persons, each of whom is fully God.