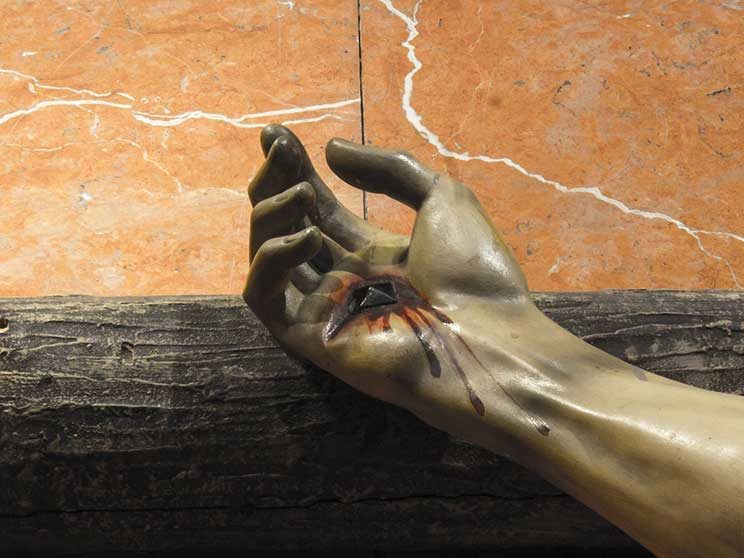 By Tom Dermody – Jesus likely died from excessive blood loss, a Catholic surgeon said during a talk that examined the 18 hours of Christ’s passion and crucifixion from a medical perspective.

“Christ emptied himself,” Dr. Timothy Millea told about 100 people at his home parish of St. Paul the Apostle in Davenport. “As a surgeon, two words that make our hair stand on end are ‘bleeding out,'” he said. “If you can’t stop it, you can’t keep that patient alive.”

Millea, an orthopaedic surgeon with offices in Iowa and Illinois, is president of a local chapter of the Catholic Medical Association for members in those two states.

He said an adult male has about 1.5 gallons of blood and that the loss of 40 percent of that blood can lead to hypovolemic shock, a life-threatening condition. Jesus likely surpassed that threshold after repeated beatings through the night, an intense scourging at the hands of Roman soldiers that included wearing a crown of thorns and having nails driven through his upper wrists and feet.

“Some people ask, did Jesus really die of physical factors, or did he – as God – say, ‘OK, my work is done,'” said Millea. After taking his audience hour-by-hour through Jesus’ physical and emotional suffering from the Agony in the Garden to his death on the cross, Millea countered that “how he lived this long is one of the biggest divine mysteries.”

He said his interest in researching this topic began in 1986 when he read an article “On the Physical Death of Jesus Christ” in the Journal of the American Medical Association. His subsequent research showed that Jesus’ medical condition has been discussed since the 16th century.

Among the latest sources he quoted was the 2014 book “A Doctor at Calvary: The Passion of Our Lord Jesus Christ” by Dr. Pierre Barbet. Millea also referenced modern research on the Shroud of Turin, believed by many to be Jesus’ burial cloth.

For example, he said the man whose image is seen on the shroud was 5 feet 10 inches tall and weighed about 175 pounds. While tradition says Jesus was whipped 39 times in his scourging, nearly 400 wound marks are counted on the shroud and “every one of them (was) bleeding” on the day of his death.

While he promised his talk would not be “like watching Mel Gibson’s movie again” – a reference to the graphic depictions of Jesus’ sufferings in the 2004 biblical drama “The Passion of the Christ” – there came a time in his description of the crucifixion when he paused and asked his audience to “bear with me, we’re going to get through this. I don’t like this part, either, but it’s pretty important.”

He described Jesus’ passion and death as “a tragic story, a horrible story, a painful story,” but ended his presentation by showing an image of the resurrected Christ on the screen to illustrate that “this story doesn’t end with where we finish tonight.”

The surgeon acknowledged that other physicians and historians have suggested that Jesus might have died from asphyxiation because breathing was so difficult on the cross. Others say perhaps he had a heart attack after the hours of physical exertion and trauma.

But Millea feels the blood loss theory is not only medically likely but it also corresponds with the theological teachings of atoning sacrifice, with Jesus taking the place of the slaughtered lambs of the Old Testament. Sacrificed animals also died from blood loss.

“Jesus was literally the sacrificial lamb,” he said.

Other medical and historical evidence the surgeon cited included:

– A rare medical condition that matches the description in the Gospel of Luke that Jesus’ sweat during his agony in the Garden of Gethsemane “became like drops of blood.” The condition, called hematohidrosis, causes blood to be released through the skin and “is almost always associated with intense emotion or physically challenging episodes.”

– The whip used in the scourging was likely a flagrum, with leather cords 2 feet long that contained metal objects, glass and lead balls. “It was a very diabolically effective means of harming the tissues down to muscle depth,” said Millea.

– The crown of thorns likely more resembled a helmet than the laurel wreath depicted in art. “Every time the soldiers hit the thorns, they impaled in his scalp,” said Millea. “If you’ve ever had a cut on your scalp, you know it bleeds like crazy.”

– Jesus probably only carried the horizontal beam of the cross, because both beams would have weighed 300 pounds. “You’ve got a 175-pound man who has been beaten, he’s bleeding, he hasn’t eaten or slept or had anything to drink, and he’s going to carry 100 pounds for 600 yards. He fell three times? It’s a miracle he didn’t fall more often.”

– The nails in Jesus’ hands likely would not have been in the palms, which could not have held his weight. There is a space in the upper wrist where ligaments are strong. “The problem, for those of you who have had carpal tunnel problems, is that the median nerve travels through there,” said Millea, meaning the pain would have been intense.

Millea went through Jesus’ last seven recorded phrases – including “I thirst” and “It is finished” – which he said were necessarily short because of the difficulty in breathing that Jesus was experiencing.

He said the crucifixion was a public spectacle and Jesus’ followers most likely thought it was the worst thing that could have happened not knowing that it would later prove to “be the best thing that ever happened.”