Is This the Holy Grail?

Legends have surrounded the Holy Grail, the chalice of the Last Supper. Now a researcher claims to have proven the Holy Chalice of Valencia as the true Holy Grail. Can this really be so, asks GÜNTHER SIMMERMACHER. 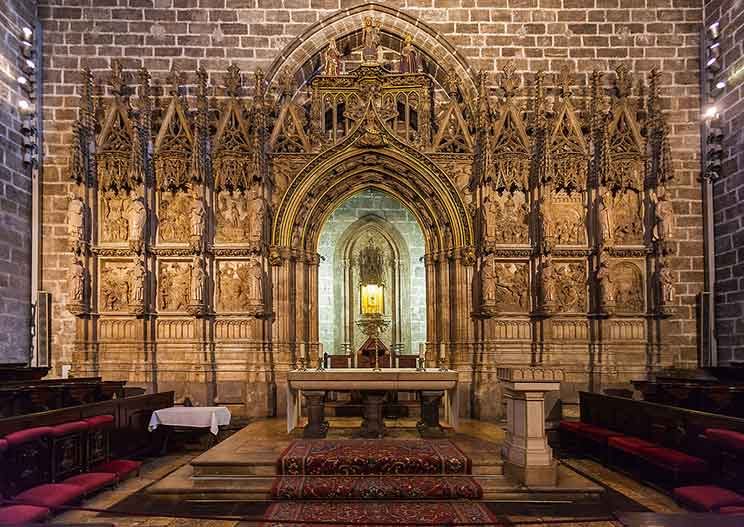 The chapel of the Holy Chalice in Valencia’s cathedral. A researcher claims to have proven that this is indeed the real cup Jesus drank from at the Last Supper. (Photo: Diego Delso/Wikipedia)

The quest for the Holy Grail, the vessel from which Our Lord drank at the Last Supper, is the stuff of legend—and the real thing might be standing in Spain (or in about 200 other places claiming to have it).

The legend of King Arthur and his probably fictitious band of chivalrous sidekicks was built around the search for an item that supposedly has the powers to give eternal life on this temporal plane.

More recently, on the big screen, Indiana Jones and the Nazis raced to find the Holy Grail. If you haven’t seen the film but plan to, skip the next couple of paragraphs (though if it has taken you three decades to get around to it, you probably don’t really need the courtesy of a spoiler alert).

After the usual death-defying shenanigans, Indiana Jones and the Nazis arrive at a crypt filled with drinking vessels of all sorts — but only one of them is the genuine Holy Grail.

Having been advised by the ancient monk guarding the collection to “choose wisely” in solving the riddle of the true grail, the Nazi bad guys pick the most ostentatious chalice, golden and bejewelled, as befits the King of Kings.

As the main Nazi villain sips from the cup in the expectation of gaining immortality and world domination, his face grotesquely melts. The sage monk states the obvious: “He chose…poorly.”

Indiana Jones, the world-famous archaeologist, goes on to pick what he thinks is the cup of the Last Supper: a plain clay vessel.

According to the monk, he chose…wisely. In a turbulent finale, the cup then gets irretrievably lost, thereby avoiding the fate of being displayed in a museum full of other things which Jones and his colleagues have plundered from colonialised countries and now refuse to give back.

The Last Supper was a Passover meal when particular care would be taken to ensure that everything would be ritually clean. Palestine’s Jews of the time did not use porous crockery, which even after careful washing could still be unclean, but usually implements made of stone, which were less likely to convey impurities.

The Holy Chalice would most likely have been made of stone (though some fashionable Jews used fancy red terra sigillata pottery, which might be what Indiana Jones picked).

Nobody can know whether after the Last Supper — probably a catered event in a guesthouse — anybody cared to mark the cup Jesus used and keep it specifically identifiable, but as head of the table at the Passover supper, Jesus might have been given a special ceremonial cup — which a few days later would have become even more special.

That cup might be standing now in the Santo Cáliz (Holy Chalice) chapel in the cathedral of the Assumption of Our Lady in Valencia, Spain.

A researcher has published her claim, with a confident 99,9% certainty, that this polished brown agate vessel is indeed the Holy Chalice.

In a doctoral thesis, art historian Ana Mafé García recites proof from the 1960s, by Spanish archaeologist Antonio Beltrán that the artefact is of Hebrew heritage, probably made in the first or second century BC. And the volume of liquid it can hold is consistent with ritual use in Palestine of the time.

Dr Mafé believes an Arabic inscription at the bottom of the cup refers to Jesus, though I don’t understand how that serves as proof of anything.

The grail in Valencia — which is first recorded in 1399 as part of the reliquary of King Martin of Aragon — looks rather like what the Nazis in the Indiana Jones film might unwisely choose. But the bling is just reverential decoration on the encasing of the actual stone grail.

The rector of Valencia cathedral is happy with Dr Mafé’s finding, and the researcher herself is saying that she has a devotion to the grail.

Except, there is that 0,1% uncertainty (I’d say that figure is a lot higher): we have no evidence that Jesus ever drank from it. It could be anybody’s mug.

And then there is the subject of the doctoral thesis, which is not really the authenticity of the Holy Chalice itself but how it can be used to increase tourism to Valencia. Without claiming that this chalice is the real thing, there’s hardly a compelling thesis to write.

So it is fair to maintain doubts about the authenticity of Valencia’s Holy Chalice, which has serious competitors in the grails in the basilica of San Isidoro in León, northern Spain, and in Genoa, Italy.

But that should not deter its veneration. If Jesus didn’t drink from that cup when he instituted the Eucharist in the Upper Room on Mount Zion, then it was one much like the one in Valencia (or León).

What is important is that he took his cup, rather than exactly which cup he took. And that, not the cup, is indeed the key to everlasting life.