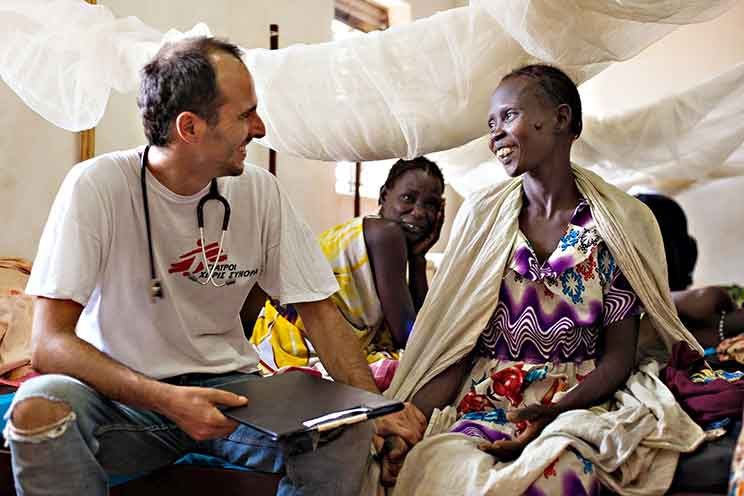 A member of Doctors Without Borders attends to a patient in a refugee camp. In April, Pope Francis asks us to pray for humanitarian workers, especially those in dangerous regions. (Photo: MSF)

Prayer Intention: For doctors and their humanitarian collaborators in war zones, who risk their lives to save the lives of others.

The fog of war is a dangerous place to be, but we are thankful that there are those who will take their chances in such a terrifying environment for the sake of humanity in general and for sick and injured people in particular.

There are many unsung heroes doing their best to protect and to save people in the world’s war zones. Some have given their lives for this.

We tend not to notice them precisely because they do not go out to attract notice. Grandstanding is not their style.

Furthermore, many of the conflicts where they do their good work have been going on for so long that “compassion fatigue” has turned the world’s attention away from them.

It has often been observed that most people are willing to make sacrifices, even the supreme one, for their own country and kin. But to go to another land and risk one’s life in someone else’s conflict commands our attention and admiration.

The risks to members of these organisations are not just that they labour in the physical danger of war-zones. The politics with which they have to contend can be equally deadly.

In such conflicts the protagonists often take the crude view that “you’re either for us or against us”. Groups which serve anyone, whichever side they are on, are suspect and vulnerable.

Members of the Red Cross, for example, can all too easily get hurt in the propaganda war that mirrors the actual war. If they raise their voices against one or the other side of atrocities, or even against both sides, this is very dangerous for them.

A Syrian organisation called the White Helmets has recently experienced this. It was set up to help save and evacuate the thousands of civilians caught up in the civil war in Syria. For a while it was the darling of the press, generating heart-stirring stories of heroism and dramatic images.

Suddenly a cloud of suspicion enveloped it. It was said to have been set up by a former British military man. It received Western financial support, so how could it be neutral in the struggle? It was accused of staging photo-ops and even of being a terrorist organisation.

Fact-checking journalists took a closer look and came to the conclusion that these stories were fake news created by a Russian disinformation campaign. But, of course, once such stories have been injected into the Internet, they remain out there and continue to be read and passed on. Some may go viral.

A concerted campaign of false news can effectively destroy a reputation, even if it is later corrected. Once a reputation has been destroyed, physical elimination may not be far behind in these savage circumstances.

These are some of the hazards of the groups that the pope asks us to remember in our prayers.

When you are trying to save lives under perilous circumstances in conflicts that seem never-ending and you are being attacked by powerful propaganda machines, you need all the support you can get.

The universal reach of humanitarian organisations pays tribute to the way in which human rights have come to be seen as universal and indivisible. That the right to life and security should be enjoyed by everyone, not just privileged peoples in wealthy countries, and that if there are those who are not enjoying them somewhere in the world, then we are all threatened and even deprived.