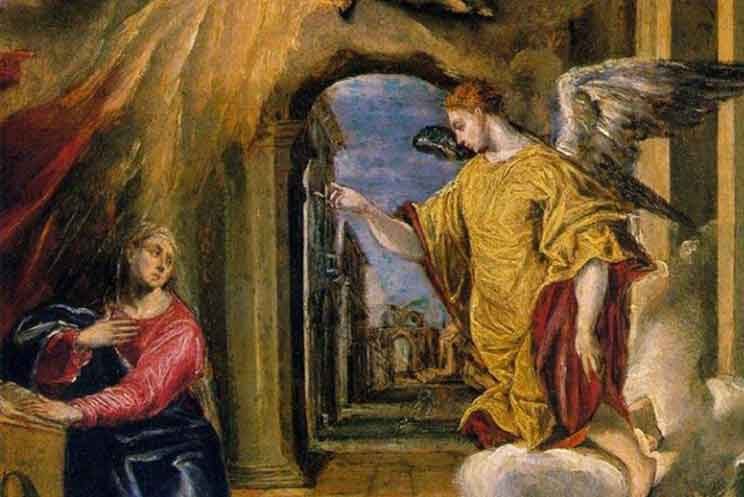 The Annunciation painted by El Greco

What exactly is Mary’s role in salvation? MICHAEL OGUNU addresses a Catholic teaching that is often misunderstood by some Protestants and Catholics

One of the most controversial doctrines of the Catholic Church, in as far as it is always attacked by ignorant people, is the role of Mary in the salvation of mankind.

Those who do not know the official position of the Church in relation to devotion to Mary, the Mother of God, tend to think that Catholics have placed Mary in the same position as Jesus.

Others even say that we have substituted Mary for Jesus. They say that we regard Mary as our saviour and mediator, in defiance of the scriptures. Others say we give the role the Holy Spirit is playing in the salvation of mankind to Mary.

Mary’s role in the salvation of mankind is a vocation which God gave her from all eternity. Her physical and moral gift of body to Jesus, the Redeemer, constitutes a concrete, real and inner participation in the work of salvation.

Because she gave her body to bear the Redeemer, she participates in a unique way in redeeming us.

The intimacy of the mother and the son in the work of salvation can be seen at the very moment of the virginal conception of Mary because that conception has nothing in view other than the salvation of the world.

The work of redemption reached its apex on the Cross, and there as well, Mary was not a passive onlooker. She was actively engaged as if nailed completely with Jesus. It is as a result of her suffering with her son that the Church calls her “Queen of Martyrs”. She was a spiritual martyr. In being a spiritual martyr at the foot of the Cross she contributed to our salvation.

According to the Second Vatican Council, “the Blessed Virgin Mary…under the guidance of the Holy Spirit made a total dedication of herself for the mystery of redemption of men”.

The Bible, as well as the Tradition of the Church, shows the role of Mary in the plan of salvation. The Old Testament, in the very first book, spoke about her prophetical role in bringing about salvation. She was spoken of in the promise of victory over the serpent (Gen 3:15).

Isaiah 7:14 prophesied of her: “Behold the virgin shall conceive and bear a son, whose name shall be called Emmanuel.”

After a long period of waiting, God’s plan was materialised in her when she consented to be the mother of the Saviour. God did not force divine maternity on her. He sought her assent when the Angel Gabriel was sent to her.

This is quite understandable. God wanted her consent to be freely given as the mother of his Son “so that just as a woman had a share in bringing about death, so also a woman should contribute to life”.

Because of her role as Mother of God and Mother of the Church, God preserved her from all stain of sin from the first instant of her conception. She was given a unique holiness so as to be well-equipped for her role in the salvation of mankind. This is the reason why the angel greeted her with the words, “Hail full of grace” (Lk 1:28).

After the angel had delivered his message and explained how God would bring about the humanly impossible conception without mating or test-tube fertilisation, Mary said: “Behold the handmaid of the Lord, be it done unto me according to your words” (Lk 1:38).

By these words, Mary consented to the word of God, became the Mother of Jesus, and part and parcel in a secondary role of the redemption of mankind. Since she gave her assent wholeheartedly to God’s plan for redeeming mankind, she is also an instrument in bringing about salvation to the whole world.

The intercessory role that Mary played during her lifetime, she continues to play today in a pre-eminent way in the Church.

There was no time when she was not united with her Son’s work of salvation, right from the moment of her virginal conception till the death, resurrection and ascension of the Lord.

She participated and associated with her Son’s sacrifice on the Cross in her own mother’s heart. As our Lord stayed dying on the cross, Mother Mary was interceding for the world. She is still doing that today.

Before our Lord died, he said to John the Evangelist, “Behold your mother”, and to Mary he said: “Woman, behold you son” (Jn 19:26-27). Theology has interpreted this to mean that Jesus gave Mary to us as our Mother; that John represented us at the foot of the Cross, that is, all who seek to be the beloved disciple of Jesus.

It is Jesus who makes Mary our Mother.

The Church says in the Document of Vatican II on the Church: “This motherhood of Mary in the order of grace continues uninterruptedly from the consent which she loyally gave at the Annunciation and which she sustained without wavering beneath the cross, until the eternal fulfilment of all the elect.

“Taken up to heaven, she did not lay aside this saving office but by her manifold intercession, continues to bring us the gifts of salvation. By her maternal charity, she cares for the brethren of her son, who still journey on earth surrounded by dangers and difficulties until they are led into their blessed home.

“Therefore the Blessed Virgin is invoked in the Church under the titles of Advocate, Helper, Benefactress, and Mediatrix.”

All these titles are to be looked upon as being carried out by our Blessed Mother in a subordinate way to her Son Jesus.

Jesus is the only one who has the executive power, which he commissions to Mary. It should therefore be understood that Mary’s role as our Advocate, Helper, Benefactress and Mediatrix does not take away anything nor add anything to the dignity and efficacy of Christ as the one mediator between God and Man.

St Thomas of Aquinas is quoted to have said: “Properly speaking, the office of a mediator is to join together those between whom he mediates, for extremes are united by an intermediary.”

Jesus is the unique mediator between God and man but there is nothing to prevent others from being mediators below Christ, and subordinate to him as secondary mediators

But St Albert notes that “Mary was chosen by the Lord, not as a minister but to be associated in a very special and quite intimate manner in the work of redemption of the human race”.

Mary shows mercy to her children by extending to us the mercy of Jesus Christ. Tradition has upheld the universal mediating role of Mary. She mediates for us but in a manner subordinated to Christ.

As Mary offered the sacrifice of the Cross with Jesus Christ for us, she mediates for us by making reparation in an ascending order. This is her ascending mediation. Her descending mediation consists in obtaining for us graces from Christ its source, and distributing them to us as the mother of divine grace.

It is our Catholic belief that God is the source of graces which Jesus wins for us in his blood, and that it is the will of God that these graces should come to us through Mary! Why? That is how God wills it.

Since Jesus Christ, who is the original grace of God, was given to us through Mary, is there anything illogical if all other graces come to us through her?

Our Blessed Mother Mary has been given to us as a source of hope for all. When we call her our hope, we do not mean that she has become our God.

Many take exception to this title on the grounds that God alone is our hope. They even quote the Bible to buttress their argument: “Cursed be the man that puts his trust in man” (Jeremiah 17:5). They say Mary is a creature, and how can a creature be our hope? Despite this objection, the Church maintains the titles: “Our Hope” and “Hope for All”.

St Thomas Aquinas says: “There are two ways of placing our hope in a person: as a principal cause and as a mediate one. Those who hope for favour from a king expect it from him as a lord, they hope for it from his minister or favourite as an intercessor. If the favour is granted it comes primarily from him but it comes through the intermediary of his favourite, and in this cause the beneficiary of the favour is right to call his intercessor his hope.”

In a vision the Blessed Virgin Mother revealed to St Bridget “that there is no sinner in the world, however much he may be at enmity with God, who does not return to him and recover his grace”, if he has recourse to her and asks her assistance.

The same saint heard Jesus say of his mother that one day  she would be “ready to obtain the grace of God for Lucifer himself if only he humbled himself so far as to seek her aid”.

Would Lucifer do that? Never! If he would do that, the all-compassionate mother would be ready to come to his aid.