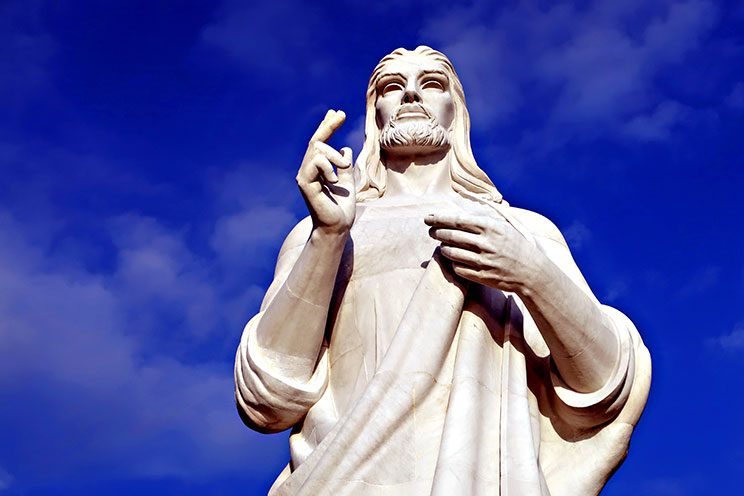 The 20m statue of Christ that overlooks Havana. (All photos: Günther Simmermacher)

Recently Günther Simmermacher  visited Havana, the capital of Cuba. In the second of two articles, he looks at the Catholic faith on the island, and recalls an encounter with God.

The Catholic Church is easily the biggest Christian denomination in Cuba, but the bigger religion is a hybrid of Catholicism and Afro-Cuban pagan traditions.

The Afro-Cuban religion arrived on the island with the slaves brought in from Africa, mostly Nigeria, after the Spanish colonialists had practically exterminated the indigenous population.

The Church and their colonialist friends in power naturally objected to people practising pagan religions, so a syncretised devotion developed underground. People would publicly be Catholics by day but after-hours practise the rites based on Yoruba beliefs and traditions.

Over time this became a new religion called Santería, which means “The Way of Saints”. Catholic saints would hold a dual portfolio: one in the traditional Catholic devotion, the other as a cover for representing a demi-god (or “orisha”) in the pagan practice.

So devotees of the Santería would outwardly have a devotion to say, St Anthony of Padua. But in the pagan practice, St Anthony represents Elegguá, the most important orisha in Santería. It was a perfect cover.

And it was fairly easy to syncretise: the traditions of Santería (and other Afro-Cuban religions) recognise one God who is surrounded by spirits. From there it is no huge leap to borrow from a religion that believes in one God surrounded by saints.

Today it is said that 80% of Cubans have some sort of relationship with Santería, though many of those practise the Catholic faith at the same time. It’s a duality which we are not strangers to in South Africa.

Cuba’s Catholic Church says that 60% of the country’s people are Catholic, which is pretty good in light of several decades of atheist indoctrination. But of that 60%, only 5% go to Mass regularly.

Indeed, when on our visit to Havana last month my wife and I went to Saturday evening Mass in the church of the Immaculate Conception, built in 1874 in the working-class neighbourhood of Havana Centro, where we stayed, there were about 20 people there.

Truth be told, it was a rather lifeless Mass, with no hymns. One can see why people might stay away.

I imagine that things are better in the city’s marvellous cathedral, the seat of the archdiocese of San Cristobal de la Habana, which held the remains of Christopher Columbus for 102 years before they were taken to Seville’s cathedral in 1898, after the Cuban War of Independence.

It was the Jesuits who started building the cathedral on the site of an older church in 1748. Construction was still going on when Spain’s King Carlos III expelled the Jesuits from the island in 1767. The church was completed ten years later.

The Cuban writer Alejo Carpentier famously described the cathedral as “music set in stone”, though with its asymmetrical towers (one of which can be climbed) and its relatively sober interior, that music might be more Stravinsky than Strauss.

The Jesuits were allowed back later and now run what might be Havana’s most beautiful church, the parish church of the Sacred Heart and St Ignatius, popularly known as the Reina church, on a busy street in Havana Centro. Built only in the 1920s, it looks and feels much older thanks to its gothic design.

Its newsletter suggests a lively parish life — and as long as events are confined to parishes, the faithful of Cuba now enjoy a fair amount of freedom. In fact, many parishes in Havana are reported to have an  active community life.

In this way, the Catholic Church is enjoying a quiet revival in Cuba — and occasionally that can get loud these days. 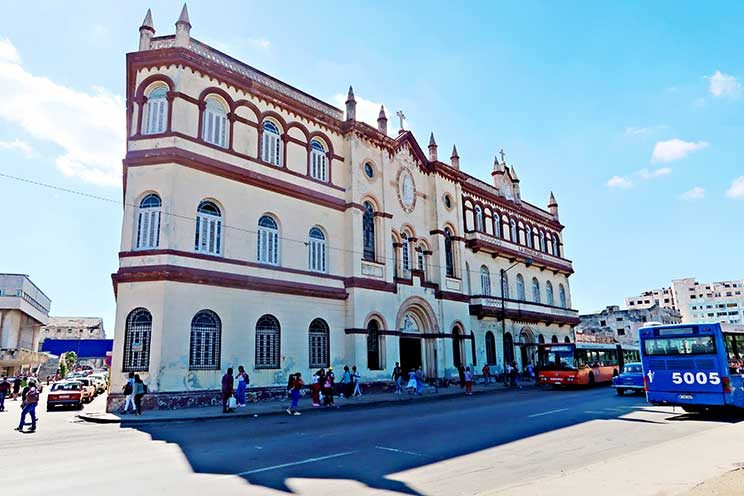 The church of the Immaculate Conception in residential Havana Centro.

How Cuba got a patron

Every year on September 8, the faithful throughout Cuba hold processions in honour of Nuestra Señora de la Caridad del Cobre (Our Lady of Charity of El Cobre).

She is the patron saint of Cuba, going back to the wars of independence from Spain in the 1870s and 1890s.

The story of that devotion begins in 1612 when three youngsters in distress while out at sea prayed to the Blessed Virgin, whereupon the storm that had tormented them spontaneously stopped.

Floating on the now calm water, they saw what they thought was a little girl. It turned out to be a statue of Mary floating on the water. On it was written, “I am Our Lady of Charity”. Remarkably, it was dry.

The statue became a popular destination of pilgrimage. Today, almost every Cuban church has an altar of the Virgen de la Caridad del Cobre, often depicting the young people in a boat at her feet. A Cuban flag always hangs beside it.

Havana’s Catholics also come out in procession on Good Friday when they follow the Via Crucis (or Way of the Cross) through the narrow streets of Habana Vieja.

Some houses still bear a cross as a sign that their location used to serve as a station on the Via Crucis.

In centuries past, the procession would be led by a monk who was appointed to receive the scorn and abuse which was directed at Christ during his final walk to Golgotha.

The people would enjoy the opportunity to abuse the monk thus honoured rather too much. The poor man would be peppered with insults and rotten fruit.

The Franciscan monks had a way of making themselves unpopular. Near the harbour they had an impressive basilica, built between 1580-91. But they objected to the noise made by the people on the market held in front of it. So the Franciscans had the market moved to another square, the Plaza Viejo (which today is the jewel of Havana’s renovation programme).

The Franciscans lost their basilica during the brief British occupation in 1762 during which it was occupied by the Anglicans. After Spain reclaimed the island and the British left, the Franciscans decided not to resume possession of the basilica.

It is now a museum, but the Franciscan past is still prominent: on the façade is a cross, in front of it a statue of the Franciscan saint Junípero Serra with the boy Juaneño, and all that is located on the Plaza de Francisco de Asis.

The Franciscans, meanwhile, moved into a rather more modest but very beautiful church first built by the Augustinians in 1608. They have served from there for almost 250 years, aside from a period after the revolution when they were expelled from their own church. 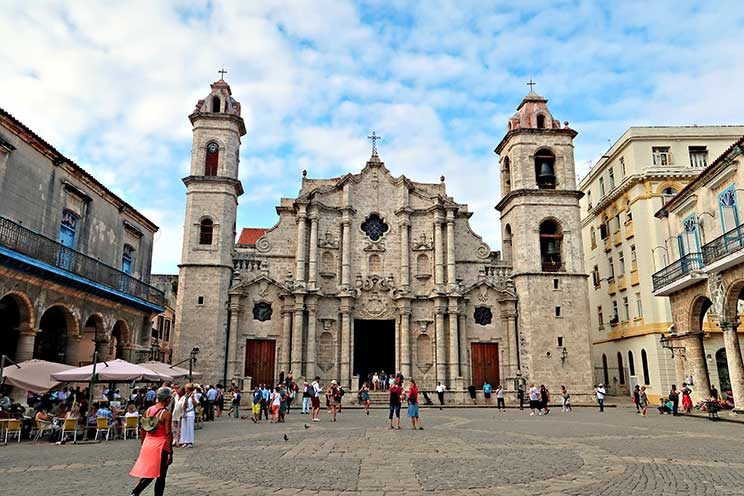 The whole city of Cuba is watched over by a 20m-high statue of Christ, on a hill in the suburb of Casablanca, across the bay from Habana Vieja.

The Cristo de La Habana was made in the 1950s of imported Italian marble, which was blessed personally by Pope Pius XII, at the commission of the wife of dictator Fulgencio Batista.

Cuban sculptor Jilma Madera tried to inculturate his Christ, giving him the facial features of an average Cuban. Unintentionally he inculturated more than he had bargained for.

Unlike most mega-statues of Christ, the Cristo de La Habana stands with his hands to his chest in a pose of giving a blessing, rather than with his arms outstretched. The position of Jesus’ hands, the Cubans like to say, looks like he is holding a cigar in his right hand and a mojito cocktail in the other.

The statue was inaugurated on December 24, 1958. A week later, Batista plundered the Reserve Bank and fled the country in the face of Castro’s revolution.

On the military base next to the statue is Che Guevara’s house. It’s a nice thought that every time Che looked out of his front windows, he saw Jesus.

And with this pleasing notion we return to Animas, the street in residential Havana Centro where we had rented our apartment in a section of what in the 1920s was built as a palacio.

An encounter with God

The front door of our building wasn’t easy to unlock. One evening, after a long walk along the Malecón seaside, we were struggling to open that door when a nice elderly man appeared from the neighbouring house. He greeted us and applied some key-turning trickery which effortlessly opened the pesky door.

It turns out that he was our neighbour. We had noticed that the front-door to the apartment opposite ours sported a number of religious plaques, along the lines of “God bless this home”.

Having climbed the stairs together and arrived at our respective front doors, I asked the man in my broken Spanish: “Eres Católico?” He responded affirmatively. “Un momento,” I asked and dashed into our apartment.

In my suitcase I had a few rosaries from Bethlehem, contained in a small plastic cases bearing different holy images. I randomly grabbed one and returned to my new friend.

“Un rosario de Tierra Santa,” I double-dutched in Spanish as I handed the rosary in its plastic case to the man.

The man looked at it and became visibly emotional. He called his wife and showed her what we had given him, whereupon she became emotional, too.

In the ways of people who don’t speak each other’s language, she explained that the intercession of the Immaculate Heart of Mary, a medallion of whom she wore around her neck, had cured her of some throat ailment or other.

The image on the plastic container depicted the Immaculate Heart of Mary.

The man was quietly weeping as he thanked us. I don’t suppose that it was the idea of receiving a gift from strangers that affected this couple so much, nor the coincidence of the image being one that had particular devotional meaning to them (they didn’t even know how easily I might have grabbed a plastic case with another image).

Obviously our gift, and the image on it, meant a lot to the couple, perhaps in ways we cannot even imagine. But I think what created so much emotion—and we too were swallowing hard to control those lumps in the throat — was the grace of God’s guidance that had brought us together at this specific moment for this specific encounter. It was the presence of God, with us on this stone staircase.

The many memories of our four days in Havana will always remain with me. They will return whenever I drink out of my Ernest Hemingway mug, hear the music of the Buena Vista Social Club or see that famous image of Che Guevara.

But in a special way, that encounter with the old couple and God on the staircase of a crumbling building will forever be locked in my heart. Perhaps God guided us to stay in that place, in unfashionable Havana Centro with all the “crime” I mentioned at the beginning of this series, so that we could meet Him there..

After we closed the door and parted ways with that old Cuban couple, my wife just said: “God is good.” He indeed is.