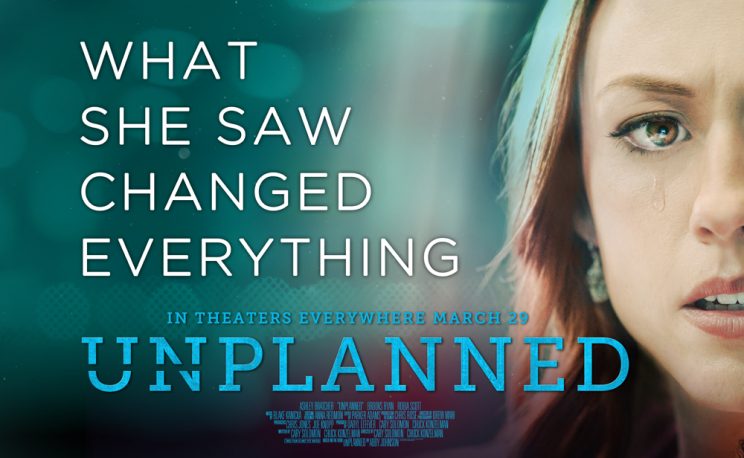 “Unplanned” is an inspiringly powerful movie that will deeply touch your heart. It will move you to feel uncomfortable, angry, sad, enlightened, encouraged, vindicated and joyful. You’ll probably even shed some tears, as I did.

“Unplanned” tells the compelling story of Abby Johnson’s total conversion from being Planned Parenthood’s  youngest clinic director in the U.S., their “Employee of the Year” for Houston and Southeast Texas and a hater of the pro-life movement, to becoming a committed Christian (Catholic) and founder of the pro-life ministry “And Then There Were None.”

Amazingly an actor in “Unplanned” who performs an abortion is actually Dr. Anthony Levatino, who formerly aborted approximately 1,200 unborn babies. He is  now pro-life!

But it wasn’t until Johnson actually assisted with an ultrasound-guided abortion did she shockingly realize that she needed to get out! On the monitor screen she saw a 13-week-old unborn child trying to move away from the suction tube, and moments later she saw only an empty womb.

Johnson’s first-hand experiences makes “Unplanned” the only movie that takes you inside the real-life world of the single largest abortion provider in the United States – Planned Parenthood –  which performs over 300,000 abortions every year.

In an interview I had with Abby Johnson, she said “Planned Parenthood’s entire business model is based upon telling women they can’t raise a child and have a career or finish school. That’s not empowerment. Planned Parenthood is about making money off of abortion. Abortions start at around $450 and go up over $800 depending on gestational age.”

Johnson added, that “Former Planned Parenthood president Cecile Richards testified in Congress that 86 percent of their revenue is from abortion. Planned Parenthood has abortion quotas, and they do push their affiliates to sell the procedure” (see: https://bit.ly/2v7MFvp).

She said Planned Parenthood required the clinic she directed to sell 1,135 abortions per year to pregnant women.

Johnson added, “The only way to make a profit off a pregnant woman is to sell her an abortion.  Because Planned Parenthood does not provide any prenatal care or ob [obstetrics] care, and they don’t get any sort kickback if a woman decides to place her baby for adoption” (see: https://bit.ly/2PVtJcI).

Planned Parenthood receives over $500 million from taxpayers each year. There are three bills in the U.S. House of Representatives that would defund it: H.R. 369, H.R. 833 and H.R. 888. Please urge your representative to co-sponsor these bills. And urge her or him to sign the petition to discharge H.R. 962 the “Born-Alive Abortion Survivors Protection Act.”

Johnson told me, “The pro-life movement needs to be one of love. We cannot dehumanize women seeking abortions and abortion workers.”

Despite its R-rating, “Unplanned” is suitable for teenagers. In fact, it’s a must see.

And then … go see “Unplanned!”

Unplanned is set for release in South Africa later in the year.