Was the Resurrection Real? 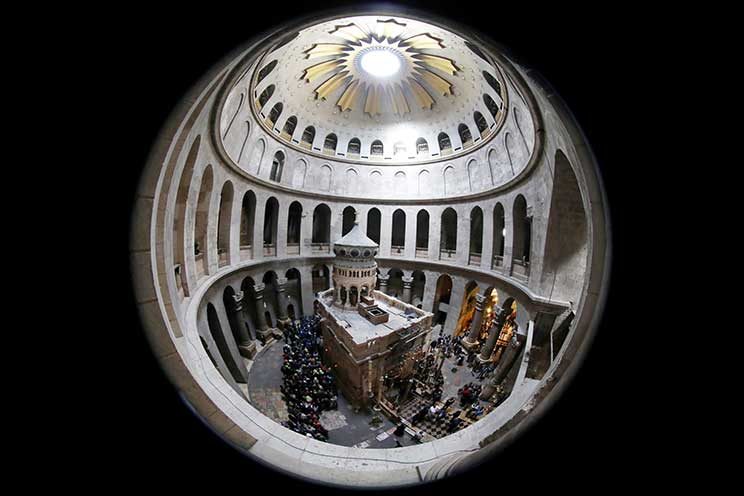 The edicule in Jerusalem’s church of the Holy Sepulchre holds the tomb of Jesus’ burial and Resurrection. (Photo: Ammar Awad, Reuters/CNS)

Was the Resurrection of Christ real? FR RALPH DE HAHN explains why it was real, and what it means to us today.

For all believers the celebration of Easter is one of hope and liberation; it is also the triumph of Truth.

But not for the religious leaders of the Sanhedrin who felt ever-threatened by the powerful preaching and claims of Jesus Christ, the new Jewish prophet.

There were other prophets too, but this man was different. He “spoke with such authority”. They were certainly perplexed and fearful of his promise to his disciples that “on the third day he will rise again” (Mt 18:14).

What got them more confused, was not only that angry response from the heavens at the hour of his death, but that in his dying breath, he cried out that all the prophecies had been fulfilled: “All is now consummated!” (Jn 19:30).

As believers, we know that with his death — and all that followed — the divine plan of salvation was complete. But was there a bodily resurrection?

Millions of sceptics—even among good Christians—cannot easily accept the biblical teaching that there was such a resurrection.

But the historical evidence from biblical and Roman records is staggering. Something out of the ordinary happened!

Luke records the big surprise: “On entering the tomb, the women with the spices found that the body of the Lord was not there” (Lk 24:1-4).

We recall that his disciples trembled with fear when their leader was arrested in the Garden of Gethsemane, condemned and crucified on Golgotha. In fact, they betrayed him (Mt 26:30-35).

But then, after those few days, came that unpredictable transformation among the disciples. Something had happened!

Standing courageously before the Jewish tribunal, these disciples boldly profess their faith in the Risen Lord, claiming they were now speaking in the temple of what they had seen and heard.

The change was indeed incredible for nobody is prepared to die for a lie! The disciples had not foreseen this happening, despite all that Jesus had foretold. On the other hand, the Sanhedrin’s authorities were prepared to set a guard over the grave of a dead man. But not the apostles! Now why was that?

Jesus had to convince his own disciples of his bodily resurrection. He appeared to them on a few occasions with his human yet glorified body, and asked: “Have you anything here to eat?” (Lk 24:40-43). A dead man has no need of food.

We probe further. Did John’s gospel not record Jesus saying, “No one takes my life from me…I have power to lay it down, and I have power to take it up again”? (10:18)

Jesus also made this promise: “In a short time you will no longer see me, and then in a short time later (on the third day) you will see me again” (Jn 16:16).

He also mentioned the grain of wheat that had to fall into the ground and die; only then would it produce a rich harvest (Jn 12:23-24).

And he will fulfil his promise to his disciples: “I am going away to prepare a place for you, but I shall return to take you with me, so that where I am you may be too” (Jn 14: 2-3).

The apostle Paul, a convert to Christ who had previously persecuted the Lord’s followers, testifies to the death, burial and Resurrection of the Lord.

All his epistles are centred around the core truth of the Lord’s Resurrection: he suffered so much to proclaim it (1 Cor 15:3-8).

To the Colossians he writes: “He was first to be born from the dead so that he should be first in every way, and all things to be reconciled through him and for him” (1:18-20).

Comfort in time of scandal

As we gaze searchingly, over this holy season, at the current onslaught on the Catholic Church in the sex abuse scandal, we need to see the Easter celebration as a sign of hope and liberation, and the triumph of Truth, for only the truth will set us free (Jn 8:32).

There are no real surprises in the current scandal. We just did not recognise and acknowledge our sailing in dangerous waters. The Book of Revelation foretells the onslaught: “Satan will be released from his prison, and will come out to deceive all the nations in the four quarters of the earth…his coming will be as many as the sands of the sea. They will come swarming on the entire land and besiege the camp of the saints, which is the city that God loves” (20:7-9).

A Church on its knees, repenting, needs to deeply trust in the power of the Resurrection: “I am making the whole of creation new” says the risen Christ (Rev 21:5).

We, in turn, will need to lean on his promise and walk in his light, knowing that “there is no need for the lamplight or the sunlight because the Lord God (the Risen Christ) will be their shining Light” (Rev 22:5).

“Let me glory in my weaknesses so that the power of Christ may rest upon me; I am content with insult, hardships, persecutions and the agonies I go through for Christ’s sake; for it is when I am so weak that I am strong”(2 Cor 12:10).

Fr Ralph de Hahn is a priest in the Archdiocese of Cape Town.

At Easter, We Can Rise Again