Why the Church Must Engage with Politics 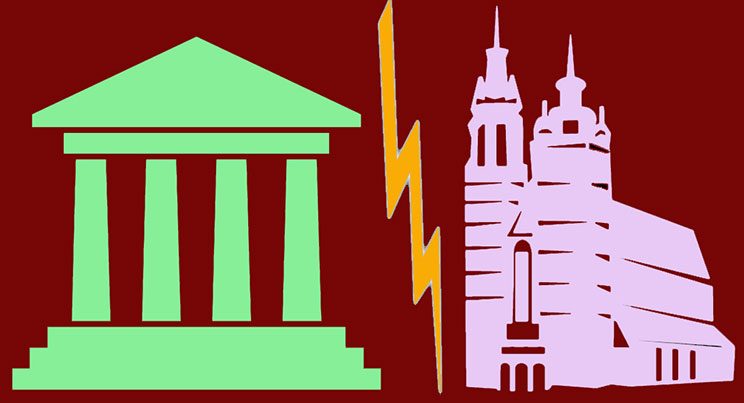 The separation of state and Church does not mean that the Church cannot speak on matters relating to politics, as Fr Valentine Iheanacho MSP explains in his article.

As South Africa prepares for the national and provincial elections on May 8, Fr Valentine Iheanacho MSP reflects on the Church’s role in politics.

The question of the place of the Catholic Church in temporal affairs—the relationship between religion and politics or between the altar and the throne—is complex.

From the outset of Christianity, when Christ told his listeners to give to Caesar what is Caesar’s and to God what is God’s (Mk 12:17), the role and place of the Church in the temporal government of men and women has, at best, been thorny and divisive.

There are those who maintain that religion ought to keep to its strict domain; that is, within the sacred and not meddle with mundane affairs like politics and state affairs.

This group may find a strong supporter in St Jerome who, in the 5th century, was critical of the romance between the Church and the Roman Empire. In his estimation, “the Church by its connection with Christian princes gained in power and riches, but lost in virtues.”

In the same century, St Augustine in his City of God developed another concept of the relationship between Church and state. It saw the two powers as both distinct and mutually dependent at the same time.

Irrespective of their mutual dependence, the spiritual is placed above the temporal since it has the ultimate aim of leading humanity to salvation.

The early Christians were sceptical about any temporal establishment or earthly kingdom.

Although biblical texts such as 1 Peter 2:17 exhorted early Christians to “Honour everyone. Love the family of believers. Fear God. Honour the emperor”, the first-century Christians had a foreshortened view of history, with their attention focused on the imminent second coming of Christ. They were much more excited about the prospect of a future reign of Christ than about mere temporal affairs.

With the passage of time, they began to make some adjustments in their expectation of the imminent end of the world.

A major shift came when Christianity first became tolerated under Constantine in AD 313, and eventually attained the status of a state religion in 380 under Theodosius the Great.

With Constantine, what is known in historical parlance as Caesaropapism began. Its emergence was “an inevitable by-product of the socio-religious and political system created to govern the Roman Empire by Constantine the Great”, according to Matthew D Bunson, writing in the 2004 Encyclopedia of Catholic History.

This imperial control of the Church would continue in the Eastern Orthodox Church until the fall of Constantinople in 1453.

In the West, the movement of the imperial capital from Rome to Constantinople in 330 left the pope in Rome as the main figure in the ancient city. This allowed him to take on both religious and political responsibilities.

For the first time, as far as historians can tell, the popes could function in both capacities which got heightened with the collapse and disintegration of the western part of the Roman Empire in the late 5th century.

The popes as temporal rulers had their rivals with the emergence of the Carolingian kings. The greatest of those kings was Charlemagne who saw himself as the new Constantine conscripting the Church into his service for a united Holy Roman Empire.

The freedom of the Church from fiefdom and imperial control was obtained with the determined efforts of the popes during the Gregorian reforms in the 12th century.

When that was achieved, Pope Innocent III at the Fourth Lateran Council of 1215 set the boundaries between the state and the Church, between temporal and spiritual powers.

These boundaries were formulated in this manner: “Just as we do not want the laity to usurp the rights of clerics, similarly we must see to it that clerics do not claim the rights of the laity.

“And so we forbid all clerics to extend their privileges to the prejudice of secular authority, under the pretext of the liberty of the Church.

“On the contrary, they should be content with the written law and the previously approved customs, so that what is Caesar’s will be rendered to Caesar and what is God’s to God, in accord with the objectively right order which is proper to each” (Constitutio 42).

In the course of time, that objectively right order envisaged by Innocent III and the role of the Church in politics became clearer.

One evidence of this is the position assumed by the Second Vatican Council. It bears recalling that, with the French Revolution of 1789, the loss of the Papal States in 1870, and the totalitarian regimes that held sway in Europe in much of the 20th century, the Church sought to protect her own.

This brought about a “Fortress Catholicism” which saw the Church closed in on itself against a “hostile” secular world.

To some extent, that fortress mentality already experienced some cracks in 1891 with the publication of Pope Leo XIII’s social encyclical Rerum Novarum, the magna carta in Catholic social teachings.

The Second Vatican Council’s optimistic view of the world opened up possibilities for the Church’s creative and active presence in the contemporary society.

In both papal and other magisterial documents, one finds a body of teachings that is constantly woven in unity, but only different in styles and issues addressed on account of different situations and times.

The Catholic Social Teachings have the goals of

– interpreting realities in every nation,

– determining their conformity with or divergence from the Gospel teachings on people and their vocation,

– acting as a guide to Christians in their attitudes towards socio-cultural, economic and political activities in civil society, and

– enabling the Church to play her prophetic role in the condemnation of evils and injustices wherever they may exist, and equally to help the Church show her preferential love for the poor.

“The Church,” said Pope John Paul II “is an expert in humanity, and this leads her necessarily to extend her religious mission to the various fields, in which men and women expend their efforts in search of the always relative happiness” (Sollicitudo Rei Socialis, 41).

Since the Church both proclaims human rights and also promotes them, all that affects the human person also has an effect on the Church. For this reason, the Church is often seen as “meddling” in politics and in the affairs of the state. But it only reminds the state to protect and guarantee the rights of citizens.

The Church itself has not always been faithful itself in upholding this ideal. For instance, one recalls with regret the close association between the official Church and some dictatorial and oppressive governments in countries such as the Philippines, Chile, the former Zaire, Brazil and others in most of the 20th century.

This sad reality of Church leaders dining with dictators notwithstanding, it still remains the expectation that the Church partners with the state so that all may live peacefully in a well-ordered society.

Such a society based on the common good presupposes three essential elements:

– respect for and promotion of the fundamental rights of the person;

– development of the spiritual and temporal goods of the society;

– the peace and security of the society (Catechism of the Catholic Church, 1925).

“Religion,” Pope Benedict XVI told British political leaders in 2010, “is not a problem for legislators to solve, but a vital contributor to the national conversation.”

A leaven in society

The Church’s contribution to the “national conversation” is not always appreciated. On occasion, it makes political leaders jittery.

Two famous examples stand out. Napoleon Bonaparte advised his Roman emissary: “Deal with the pope as if he had two hundred thousand men at his command.”

Much later on, Joseph Stalin wondered aloud to the French Prime Minister Pierre Laval, “How many divisions has the pope?”

Similar question may still be asked in political and diplomatic quarters, particularly those who may consider themselves in competition with the Church.

It is in being present to human beings and accompanying them in their daily lives and endeavours that the Church defines her role in temporal affairs.

The Church is not a political party, nor is she “committed to any culture or to any political, economic or social system” (Gaudium et Spes, 42).

Not being a political party does not make the Church apolitical. On a wide range of issues, especially those that impinge on morality, the Church may act as a pressure group of some sort. In doing so, it defines its secular allies and enemies on the basis of spiritual power.

The state as a political entity and the Church are quite independent of each other in their respective fields. While the state has two main functions—establishment and protection of the legal order, and the promotion of the general welfare—the Church “serves as a sign and safeguard of the transcendence of the human person”.

To be able to impact positively on civil affairs, the Church tasks the faithful, “to cultivate a properly informed conscience [in order] to shoulder their responsibilities under the guidance of Christian wisdom and with eager attention to the teaching authority of the Church” (Gaudium et Spes, 43).

It may be right to say that the answer to Stalin’s question is found in the active participation of the faithful in the national life of their various countries.

Fr Valentine Iheanacho is a priest of the Missionary Society of St Paul and serves at St Joseph’s church in Ficksburg, Free State.

Catholic Tertiary Student Heads Called on to be ‘Servant-Leaders’