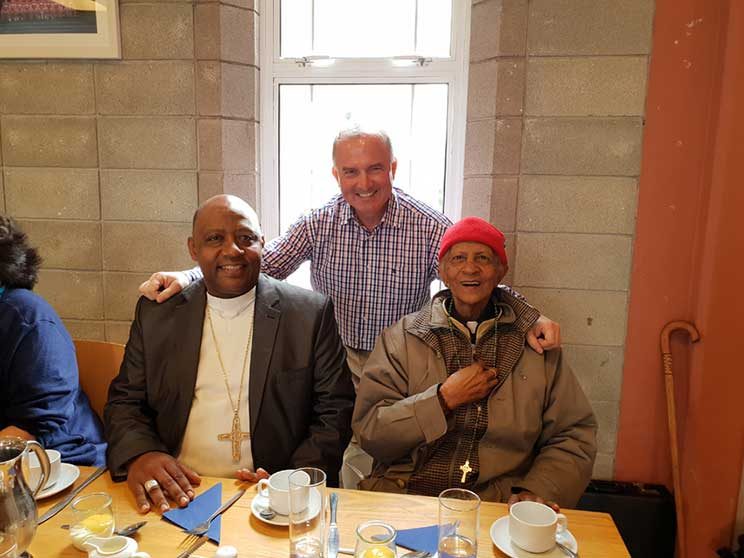 He was born to William and Marie Rachel Victoire Shand, the second of 14 children, and as a young man worked in a factory for three years to raise the funds to finish his matric.

After matric, he worked as a receptionist at Emmanuel cathedral in Durban, before joining the Oblates of Mary Immaculate. He entered the novitiate in Germiston, Johannesburg, and went on to St Joseph’s seminary near Cedara in KwaZulu-Natal where he studied philosophy.

During the course of his priestly formation, Fr Shand’s parents died within months of each other and he had to leave the seminary to care for his younger siblings as he was the sole breadwinner.

The calling to the priesthood was rekindled when his youngest sister married, 27 years after he had left St Joseph’s.

David Francis invited him to join the Servants of Christ the Priest, and Fr Shand entered the postulancy at Hammanskraal outside Pretoria in 1987.

He took his first vows in 1989 at the age of 60, and completed his priestly formation at St John Vianney seminary in Pretoria under the direction of Fr William Slattery OFM, then-rector of the seminary and now archbishop of Pretoria.

After his ordination, Fr Shand served as a priest-administrator at the SCP’s Bosco House for a year.

He was then appointed assistant parish priest to Sacred Heart cathedral where he worked until his retirement to Lady Selbourne, where he was cared for by Holy Cross Sisters.

Fr Shand, who struggled for many years to become a priest, served his Creator faithfully to the end with dedication, humility and obedience.

Always putting others’ needs before his own, he was known to have the gift of healing and touched many lives. Fr Shand was also a devoted member of the Focolare Movement, an international organisation that promotes the ideals of unity and universal brotherhood.

Fr Shand, in 2018, just the year before he died, was a member of the pilgrim group to Catholic Ireland led by Bishop Victor Phalana.

Although at times needing a wheelchair, he could still dance Irish jigs with pilgrims, and was among the clergy concelebrating the papal Mass in Dublin.