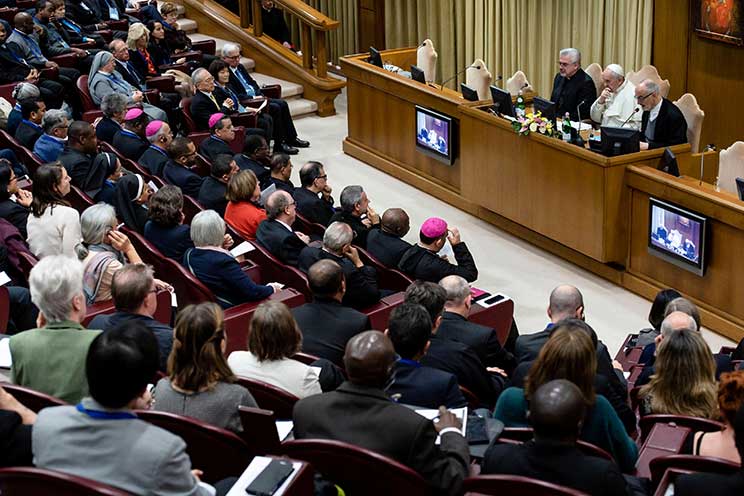 Pope Francis attends a conference on human trafficking at the Vatican. (CNS photo/Vatican Media via Reuters)

An international conference on human trafficking, convened by the Dicastery for Promoting Integral Human Development, took place in Rome and was an opportunity to focus on practical implementation of the pastoral guidelines on trafficking.

Sr Melanie O’Connor HF, of the counter-trafficking in persons office at the Southern African Catholic Bishops’ Conference, who attended the conference, said the power and passion which emanated from the round-table discussions expressed forcibly what the Church at all levels needs to engage in.

“This we do, bearing in mind Pope Francis’ exhortations, that only a joint and global effort by all actors will dismantle and eradicate this inhuman activity. It begins with reminding parents and family members about their role as first protectors against traffickers,” explained Sr O’Connor.

“No doubt, the pope’s messages on human trafficking and the enormous importance he attaches to the plight of the men, women, and children enslaved by this ‘aberrant plague’, an ‘open wound on the body of contemporary society’, came sharply into focus,” she said.

Two hundred participants from Church organisations and representatives of bishops’ conferences reflected on Pope Francis’ booklet Pastoral Orientations on Human Trafficking, and looked to turn his call into concrete actions.

Sr O’Connor said delegates were urged to denounce illegal practices and engage in initiatives to work towards fairness and justice for all. She said this also means working to enhance legal pathways for migrants and asylum seekers landing on our doorsteps, many of whom easily fall prey to traffickers.

“We were reminded that the work of raising awareness on human trafficking must begin at home, so too, the work of growing a healthy respect for one’s own body and that of another,” the South African nun said.

“While we may speculate on the shamefulness of slavery or the oppression of another, little do we think that ultimately it is the demand for certain services, such as sexual pleasure, that makes exploitation possible,” Sr O’Connor noted.

“If there were no demand, we would not have the terrible problem of young women, especially, landing up on our streets and in brothels and thrown out when they are no longer of use to their ‘slave owners,’” she said.