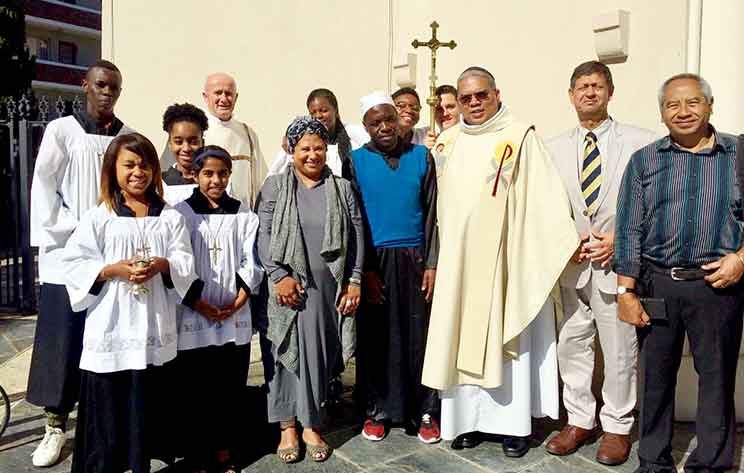 A delegation of Muslims attended Mass in a Catholic cathedral to express their solidarity following the Easter Sunday terrorist attacks by an extremist Islamic group on churches in Sri Lanka.

The group from the Open Mosque in Wynberg, Cape Town, attended the Mass at St Mary’s cathedral.

Cathedral administrator Fr Rohan Smuts said he had received an e-mail from mosque president Taj Hargey, requesting an interfaith initiative in response to the Easter attacks.

It noted the sympathy the Muslim community had received after the killings by a right-wing terrorist of worshippers at a mosque in Christchurch, New Zealand.

“With unhinged fundamentalists targeting Catholics on Easter Sunday — our holiest day — they felt the need to stand in a similar way with us,” Fr Smuts said.

“They wanted to assure Catholics that such fundamentalism and terrorism is not part of the Muslim faith,” he added.

Mr Hargey told the Southern Cross that over the past five years, a long-term commitment to building better relationships with people from other faiths, and particularly Christians, has developed. There have been interfaith braais and Christmas dinners at a mosque with Muslims serve Christians a banquet.

“When the Sri Lanka atrocity happened, we were appalled, ashamed that people who call themselves Muslims would kill others during prayer,” Mr Hargey said.

“We immediately issued a statement to the press to condemn unreservedly what these criminals had done in the name of Islam and disassociated ourselves from them,” he explained.

Mr Hargey, in his e-mail, had also asked to address the congregation briefly to express his sorrow at what had occurred.

Fr Smuts gave him permission, and he spoke to parishioners at the beginning of Mass.

In his address, Mr Hargey highlighted passages from the Qur’an, noting that the holy text of Islam advocates nothing to justify terrorism.

“This is the true Qur’an Islam, the Islam that I practise — where my best friend is an Anglican, where my professional colleague is a Jew, and where my good neighbour is an atheist,” he said.

The delegation was welcomed by the majority of parishioners, but a handful walked out when they saw Muslims present.

Fr Smuts noted that acts of intolerance are not one-sided, and while he understood that those who left come from parts of Africa where there is great tension, most parishioners appreciated the intention behind the Muslim delegation’s visit.

He added that some parishioners commented afterwards that it was a pity those who left didn’t stay to hear what was said — the message, the motivation behind all of it.