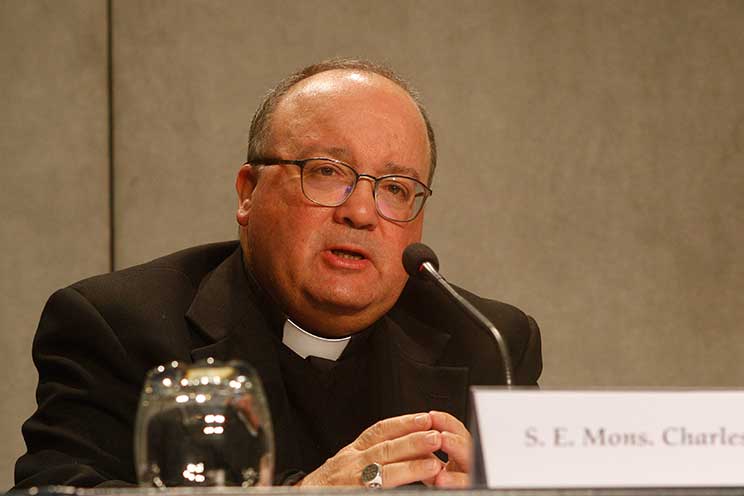 Archbishop Charles Scicluna of Malta speaks at a news conference presenting Pope Francis’ new document, “Vos estis lux mundi” (“You are the light of the world”) at the Vatican. The document, which goes into effect June 1, establishes and clarifies norms and procedures for holding bishops and religious superiors accountable in protecting minors as well as in protecting members of religious orders and seminarians from abuse. (CNS Photo/Robert Duncan)

By Carol Glatz – Pope Francis’ new norms on protecting minors and strengthening accountability are the latest steps in driving home the message that the days of keeping abuse allegations covered up or ignored are over, said the Vatican’s top abuse investigator.

In the past, some people may have thought they were protecting the church by remaining silent, but that behavior was never acceptable, Archbishop Charles Scicluna of Malta, adjunct secretary of the Congregation for the Doctrine of the Faith, told reporters.

“The good of the church requires condemnation” to the proper authorities when it comes to abuse of minors and abuses of power, he said.

The archbishop spoke to reporters about Pope Francis’ latest apostolic letter, “Vos estis lux mundi” (“You are the light of the world”) at a news conference at the Vatican. The new document establishes and clarifies norms and procedures for holding bishops and religious superiors accountable when it comes to safeguarding minors as well as abuses carried out against adults with violence, threats or an abuse of authority.

The new norms are important, Archbishop Scicluna said, because they clearly tell people they have an obligation to report already existing crimes, negligence and inappropriate behavior to church authorities.

That obligation “has always been there, but experience shows us that either a closed-shop mentality or a misplaced interest in protecting the institution was hindering disclosure,” he said.

The now universal law of mandating all clerics, as well as men and women religious, to report to the competent ecclesiastical authorities the abuses of which they become aware is important, he said, “because it makes disclosure the main policy of the church.”

Procedures have already been in place when it comes to accusations of abuse of minors by priests, so the new norms address what to do when the accused is a bishop, cardinal, patriarch or religious superior and how accusations against leadership of abuse or misconduct must be reported.

For example, “if a priest uses force with an adult, it’s the bishop who takes that case,” he said. But “when a person in leadership is guilty of misconduct, the jurisdiction pertains to the Holy See,” he said.

The new norms and clear procedures, particularly with their emphasis on having an impartial investigation of leaders, send the message that “no leadership is above the law.”

“There is no immunity” from God’s law and canon law, he added.

When asked if victims will be pleased with the new laws, the archbishop said, “Victims will be satisfied if the laws give rise to a new culture.”

“I would never go to a person who has suffered, give them a piece of paper and say that we have fixed everything. People need concrete responses” and action, which is why “I am telling people, ‘Help the pope so that his desire (to prevent abuse) becomes a reality in your dioceses.'”

The new norms will not fix everything, he added, but they do send “a very strong message that disclosure is the order of the day, and not silence.”

It is also the first time “compliance with state laws” concerning the abuse of minors gets placed in the realm of the church’s universal law, the archbishop said.

Even though the doctrinal congregation’s circular letter in 2011 made it clear the church must obey civil laws regarding abuse and reporting, the new apostolic letter “ratifies in a universal law” that mandate to respect civil requirements.

“No form of loyalty to the church must keep citizens from obeying their nation,” he said, “because in the past we have had very sad cases where people said, ‘Let’s not talk, we want to protect the church.'”

“This is a no-go,” he said, “It is not acceptable” because the good of the church requires truth and transparency, which includes respecting civil law, he said, adding that he hoped people felt “empowered to go to the police” to denounce a crime.

Church and local authorities should be working together tirelessly to combat abuse against minors because it has always been a crime for society and the church, he said.

Another important part of the new law is it facilitates disclosure by mandating that all dioceses must establish within one year “stable and publicly accessible systems,” which could include a specific office or “listening center,” where people can report cases of sexual abuse or their cover-up.

National bishops’ conferences should help dioceses figure out the best and most culturally appropriate ways to provide this form of outreach and service, if they have not done so already, he said.

The fact that there are still countries where the church does not provide a clear and permanent place or way to report abuse shows “this universal law was needed” and that having structures for disclosure is “no longer an option,” it is a papally mandated law, Archbishop Scicluna said.