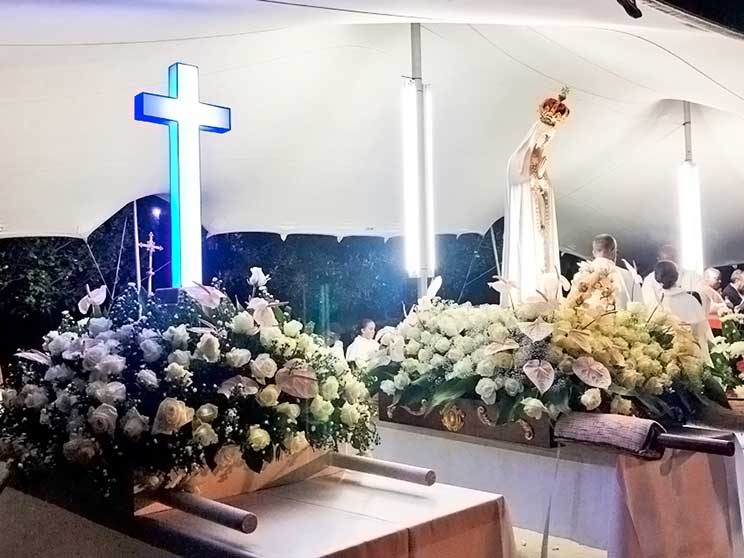 The statue of Our Lady of Fatima and the cross were carried by pilgrims from the Blessed Sacrament church to the Schoenstatt Shrine during the annual Gauteng Fatima pilgrimage. (Photo: Manny de Freitas)

The pilgrimage started from the church of the Blessed Sacrament in Malvern East, Johannesburg, and after a 4km walk, while the rosary was prayed, ended with Mass at the Schoenstatt Shrine in Bedfordview.

The Gauteng Fatima pilgrimage continues to be the largest of its kind in South Africa, though it started in 1991 with only around 50 pilgrims.

The pilgrimage celebrates the apparitions of Our Lady to three shepherd children from the months of May to October in 1917 in the hamlet of Fatima in Portugal.

During these apparitions, Our Lady appealed for prayer, especially by praying the rosary for conversion and peace in the world.

Mr De Freitas announced that the Fatima Five Saturdays will again be instituted, for the sixth year running. The Five Saturdays originated when one of the visionaries, Sr Lucia dos Santos, then a postulant, received a vision of the Child Jesus and Virgin Mary in her convent cell.

As requested by Sr Lucia, the Five Saturdays start on the first Saturday of each month from June until October, also a month devoted to Mary.

All are invited to recite the rosary at 17:00 on the Saturdays of June 1, July 6, August 3, September 7 and October 5 at the Blessed Sacrament church, cnr Geldenhuis and Mullins streets in Malvern East.