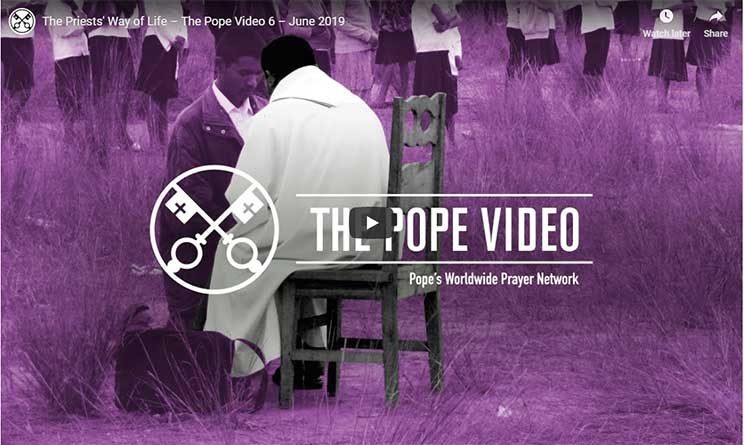 By Junno Arocho Esteves – Prayer helps men and women to view reality through the eyes of faith and to have a spiritual outlook on life in order to see God working in their lives, Pope Francis said.

Meeting with 6,000 members of the Pope’s Worldwide Prayer Network, the pope said the global network’s service of uniting Christians around the world is a “reminder that the heart of the church’s mission is prayer.”

“Be mindful,” the pope said. “Prayer is the heart of the church’s mission. We can do many things, but without prayer, things do not go forward.”

Members of the prayer network, formerly known as the Apostleship of Prayer, were in Rome to celebrate its 175th anniversary.

For decades, the global network distributed two intentions for each month. In 2016, the Pope’s Worldwide Prayer Network began releasing a monthly video featuring Pope Francis on www.thepopevideo.org. The prepared list of prayer intentions alternates each month between a missionary concern and a universal one.

During the meeting, the pope listened to several members of the global prayer network, religious and lay men and women from Taiwan, France, Argentina, Ethiopia and Guatemala, who gave their testimonies of prayer initiatives launched in their countries.

In his address, the pope thanked them for their work in uniting Catholics in prayer, which he said was “such a necessary service that highlights the primacy of God in people’s lives and fosters communion in the church.”

Recalling the testimony of Taiwanese Jesuit Father Matthew Hsu, who spoke about the launch of the Chinese language version of the network’s official app, “Click to Pray,” the pope said prayer would “bring about sentiments of brotherhood, breakdown walls and overcome barriers,” especially for Catholics in China.

“It is beautiful to know that Chinese people, aside from the various difficulties, can truly feel united in prayer, finding in it a valid support in the knowledge and witness of the Gospel,” he said.

He also thanked Sister Selam Berhanu, a member of the Daughter of the Hearts of Mary and national coordinator for the Eucharistic Youth Movement in Ethiopia. The pope said it was important for young people to learn how to pray and that the church must offer them “occasions of self-reflection, moments of spirituality and schools of the Word of God” so that they may become future missionaries.

“In this way, they will discover that prayer does not separate them from real life but rather helps them to interpret existential events through the light of God,” he said.

Regarding the global prayer network’s use of digital platforms and technology, Pope Francis said it was important for the church to adapt to the times and enter “the modern arenas to proclaim God’s mercy and goodness.”

However, he warned, Christians must not “become servants of (digital) media.”

“We must avoid becoming hostages of a net that catches us instead of ‘fishing for fish;’ that is, attracting souls to bring them to the Lord,” the pope said.