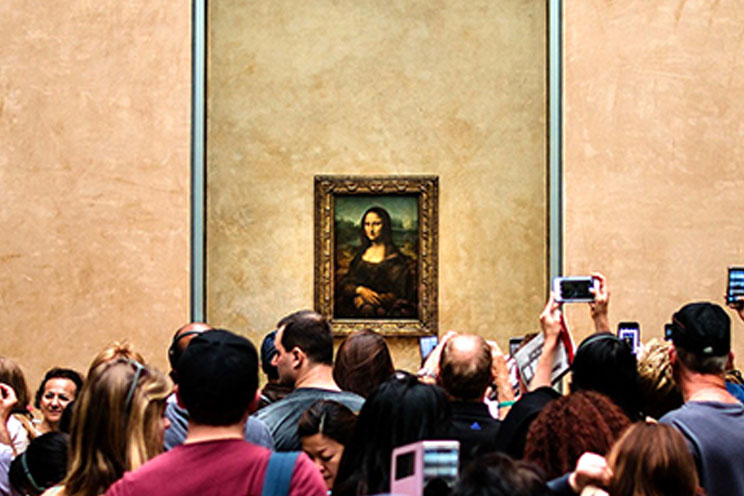 Large crowds in front of the surprisingly small “Mona Lisa” in the Louvre Museum in Paris. (Photo: Foundry Co.)

The first time I went to the Louvre Museum in Paris was a warm and sunny Bastille Day — July 14 — and the city was buzzing with tourists.

Many of them had travelled from various parts of the world to see the museum’s most famous works.

In the course of my sightseeing, I had learned much about the Louvre, for example how it was the home of the royal family before it was decided in 1682 that they would go to Versailles instead.

The museum houses works of art from centuries past. As I stood in front of a wall-to-wall 16th-century painting, I began to understand how best to say a thousand words.

Art has always been a part of human life. The wealth of it consists of rock paintings, marble sculptures and tile mosaics. Each stroke of the brush meticulously placed, each pencil mark delicately made is a word in the story each artist is trying to tell.

Some will present the chapters of kings and queens, a time when artists could be paid handsomely for capturing the likeness of royal families. Other artists dare to tell of violent tempests and wild beasts by illustrating landscapes. Some will tell stories of thieves and murderers and the valiant heroes who defeated them.

All throughout history, works of this nature have been lost, stolen and retrieved.

A  great example of this is Leonardo da Vinci’s “Mona Lisa” — which was indeed  stolen in August 1911 and returned only two years later.

As I made my way through the museum, I was overwhelmed by the number of works to be seen. I passed detailed paintings of St Peter’s basilica and a startling sculpture of the head of St John the Baptist.

After being captivated by the ornate Baroque furniture on display, I found myself in the Italian Renaissance wing where a crowd had gathered in front of Da Vinci’s small yet famous portrait.

Those in the crowd snapped away furiously with phones and flashing cameras. They circled the painting like vultures. The size of it surprised me and the frenzy that it was causing seemed undeserved. Surely Da Vinci had better works to be admired than this small painting?

Therein lies the conundrum faced by artists and those who view it. Art can be incredibly subjective.

Some appreciate art for its beauty, others purely for the message conveyed regardless of how it is done. What makes something beautiful? Who determines the criteria?

I believe that when a piece of art can reach into the depths of the heart and draw a tear, a laugh or a precious memory it becomes beauty. Is it not true that like produces like?

Thus, that which reminds us of beauty must be beauty itself. Aside from that, if you’re going to spend thousands on something that will take up space in your house and will be seen on a daily basis, it better look good.

I could utter words but even they may not be enough. I could a sing a song but even then you might forget the tune. Therefore, let me paint, draw and sculpt. Then take in the story, the characters and their settings.

Through paint, charcoal and marble, they will tell you what they have heard, for a picture can say a thousand words.