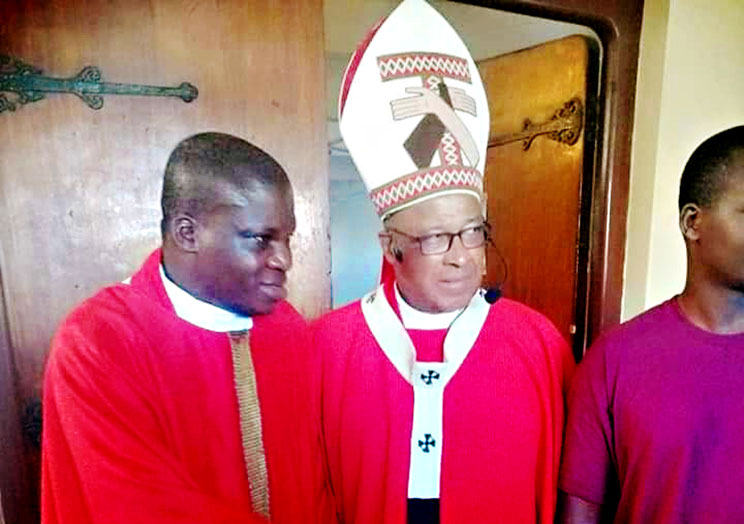 Emmanuel Kalenda Bukasa, who fraudulently presented himself as a priest in the archdiocese of Durban, with Cardinal Wilfrid Napier at the feast of Pentecost.

How a fake ‘priest conned the local Church…

A Durban parish is traumatised after a man who passed himself off as a Catholic priest in three South African dioceses was discovered to be a conman.

Emmanuel Kalenda Bukasa, a Congolese layman who presented himself as a priest from the archdiocese of Mbeya in Tanzania, was on the altar at Masses in the archdiocese of Durban, as well as in the dioceses of Umzimkulu and, reportedly, Kimberley.

According to Cardinal Wilfrid Napier of Durban, Mr Bukasa produced a Letter of Introduction and a celebret (a letter from a bishop or superior confirming that a priest may obtain permission from another diocese to say Mass). Both were fraudulently signed in the name of the now-deceased Archbishop Evaristu Chengula of Mbeya, Tanzania.

The Masses at which Mr Bukasa was illicitly on the altar included a Pentecost liturgy with Cardinal Napier and an ordination Mass with Bishop Stanislaw Dziuba in Umzimkulu, even participating in the laying of hands during the ordination rite.

There is one known case of Mr Bukasa violating the sacrament of Reconciliation, he said.

“I am indeed still traumatised by this event. I know most of our parishioners are traumatised as well. May God help us,” Fr Bidzogo told The Southern Cross.

“Let us pray for his conversion,” the priest added.

While there was no negligence in accepting Mr Bukasa’s false credentials,  Fr Bidzogo called on the Church to adopt new screening policies, perhaps including secret codes in diocesan letterheads.

“Very regularly he spoke about the Mass stipend, the priest’s allowance. You could see a man whose focus was not on the ministry of priesthood but on money,” he recalled.

“He would stay after Mass to speak to the parishioners, but it was more about inviting himself to their homes to bless them. And he would not be shy to ask them for money during or before those visits.”

When he would fail to secure an invitation, he’d become aggressive, Fr Bidzogo said. “It was very disgusting to hear all that from people.”

He started taking important responsibilities of the priestly ministry from Mr Bukasa, he said, adding that he voiced his misgivings to Cardinal Napier after the Pentecost Mass.

The fake priest first insinuated himself with a sympathetic priest. Then he presented the archdiocese with a letter of introduction and a celebret from the archbishop of Mbeya in Tanzania.

“Both documents bear an e-mail address which purports to be that of the archdiocese but is actually a fake. As a result, any query sent to the archbishop is intercepted and responded to as if from the archbishop,” Cardinal Napier explained.

“The most recent came back with the forged signature of the late Archbishop Chengula — who passed away in November 2018.”

Mr Bukasa’s intention was to have himself incardinated into the clergy of a diocese in South Africa.

His scam was discovered when Bishop Dziuba phoned Mbeya diocese. Archbishop Gervas Nyaisonga, who succeeded Archbishop Chengula in December, wrote to Bishop Dziuba that Mr Bukasa’s fraud had been discovered in Mbeya in 2016, after he had presented himself there as a priest of Jinja diocese in Uganda.

It appears that in 2017 Mr Bukasa came to Pretoria, attempting to enrol at Unisa.

It is known that he spent two years in prison for being in Tanzania illegally.

Cardinal Napier told The Southern Cross that, having obtained expert advice, the archdiocese has declined to report the fraud to the police as it is not clear what crimes he could be prosecuted for.

“Anyway, he disappeared as soon as he realised that we were on to him,” the cardinal added.

On his Facebook profile, on which he has five friends, Mr Bukasa does not claim to be a priest, but indicates that he is from Kinshasa and lists the Catholic University of Louvain in Belgium as his alma mater.