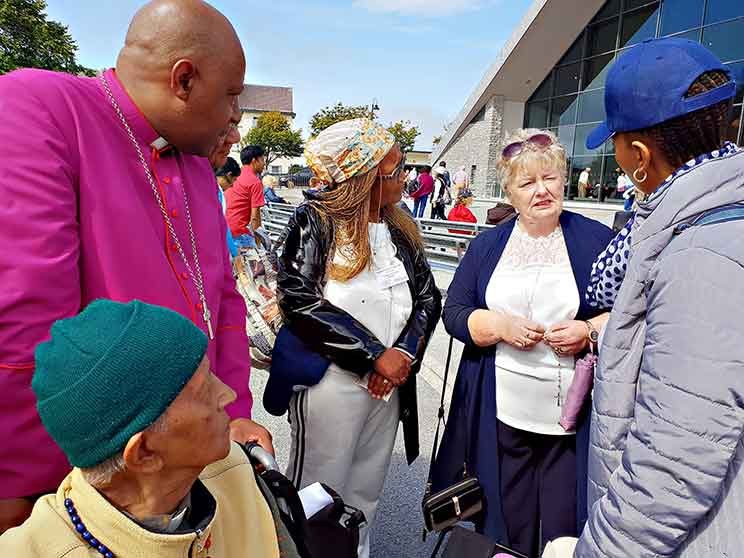 Marion Carroll, whose 1989 cure at the Marian shrine of Knock in Ireland has been confirmed as miraculous, tells her story to Southern Cross pilgrims at Knock in August 2018. Seen here listening are Bishop Victor Phalana, the late Fr Jonathan Shand, Tshegofatso Kenosi and Daisy Kotsane. (Photo: Günther Simmermacher)

By Sarah Mac Donald – The Catholic Church in Ireland has confirmed that a woman who was seriously ill with multiple sclerosis experienced a complete healing of all her symptoms at Knock shrine in County Mayo in September 1989.

The cure of Marion Carroll 30 years ago is the first officially recognised healing associated with Ireland’s national Marian shrine since an apparition witnessed by 15 people occurred there in August 1879.

Bishop Francis Duffy of Ardagh announced to a packed basilica that the Church had officially recognised the 68-year-old’s healing.

Ms Carroll, her husband Jimmy, their two children and five grandchildren were in the congregation.

Speaking from her home in Athlone, Ms Carroll recalled that on the day she was healed, she had been taken into the basilica on a stretcher because she was “completely paralysed”.

“I was doubly incontinent, I was blind in one eye and had very little sight in the other eye. I couldn’t eat right, I couldn’t talk right, and I had epilepsy,” she said.

At the blessing of the sick, Bishop Colm O’Reilly of Ardagh blessed her with the monstrance as she lay on her stretcher.

“When he blessed me, I got this beautiful feeling — it was a magnificent feeling — and then the whispering breeze telling me that if the stretcher was opened that I could get up and walk.”

After Mass, the young mother was taken on her stretcher to St John’s Rest and Care Centre in Knock. The nurses and doctors were surprised by her request that her stretcher be opened. The nurse told her afterwards that she only agreed to do it to “pacify” her.

But as soon as the stretcher was opened, Ms Carroll swung her legs to the ground.

“I stood up straight and didn’t even feel stiff” despite years of paralysis. Her voice had returned perfectly, as had the use of her arms.

A letter from a consultant gastroenterologist to the medical bureau in Knock stated “regardless of whether her condition is organic or psychological, the dramatic improvement from the time of her visit to Knock is unexplained”. The letter adds: “My feeling is that her improvement is very unlikely to be explained by conventional medical wisdom.”

Ms Carroll, whose daughter has also been diagnosed with multiple sclerosis, now dedicates time to helping the sick in Knock as well as talking about her cure at home and overseas. Last year she told Southern Cross pilgrims at Knock of her miraculous cure.

“My healing in Knock does not belong to me. This is a special gift to let people know that Jesus and Mary are there,” she said.—CNS

In Letters to German Cardinal, Retired Pope Defends Way he Stepped Down
Share