My Pilgrimage in the Footsteps of St Marcellin Champagnat 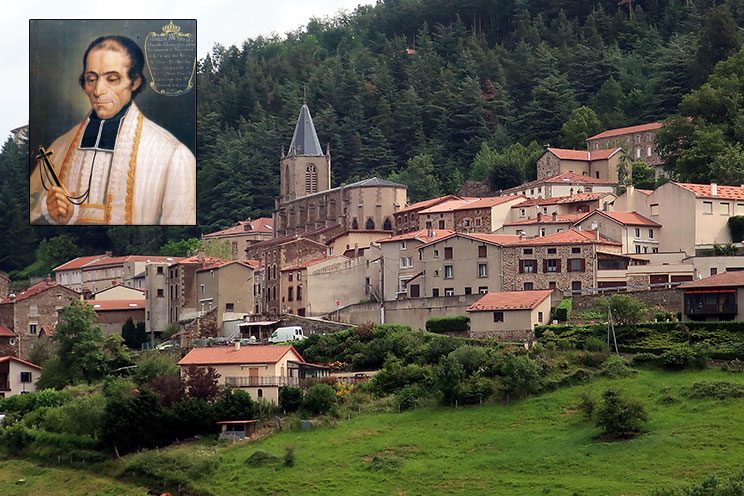 Mark Potterton, principal of Sacred Heart College Primary School, went on a pilgrimage in the footsteps of St Marcellin Champagnat – founder of the Marist Brothers – his trip took him to France and Rome and was marked by things ancient and things youthful.

The airline magazine wasn’t wrong when it claimed: “Rome has everything; it takes to flood the senses and to overpower them: history, excess, power, conflict, decadence and most extraordinary beauty.”

Magnificent domes and towering steeples dot the skylines, and you are never too far from a church richly decorated with frescoes or mosaics, or even both.

Emerging from a subway you find yourself amidst the street life of a bustling city.

Our group of pilgrims was in Rome on a journey in the footsteps of St Marcellin Champagnat (1789-1850), the founder of the Marist Brothers, the congregation of Brothers dedicated to education which has several schools in South Africa.

We walked on those streets of Rome, often squeezing past others also clamouring to get a glimpse of the wonders of this great city.

The restored frescoes, marble statues, tapestries, paintings and other objects are overpowering; and the greenery and quiet of the gardens are a respite from the throngs of tourists.

As a pilgrim, you have to make your way to St Peter’s basilica in the Vatican.

The basilica towers above you, giving you a sense of God’s grandeur. It’s hard to believe that you are standing before a sculpture that dates back to 1499 when you admire Michelangelo’s Pietà.

While climbing up to the top of the dome, I met a Coptic priest and a Buddhist monk: all three of us were in awe of this spectacle. The view over St Peter’s Square and the surrounding city is breathtaking — you certainly get a sense of the vastness of the Eternal City.

Off the beaten track, in the outskirts of the city, we found ourselves in the quiet of the Trappist monastery at Tre Fontane, which dates back to 299 AD. Here we visited two churches marking the sites of St Paul’s imprisonment and execution.

The monophonic sounds of the monks’ voices resound off the ancient chapel walls to give you a feeling that you are truly in a holy place.

The tomb of St Paul is, of course, known to be at the basilica of St Paul’s Outside the Walls.

The next day we visited the Colosseum. The spine-tingling sight of this vast arena, built from 70-80 AD, hits you as soon as you emerge from the underground station.

In the heat, we were immediately offered ice-cold water to buy.

The ruins speak of the grandeur of ancient times, and the shoulder-to-shoulder crowds around the ruins are a reminder of what it might have been like in those ancient times.

We then left Rome to travel to Lyon, to what is known as “Champagnat country”.

St Marcellin was born in Marlhes, near Saint-Étienne, on May 20, 1789—in the year of the Storming of the Bastille, which sparked the French Revolution.

The political, economic and social unrest of the day made an impact on his priorities and life.

After his ordination in 1816, Marcellin was appointed priest in La Valla, a village on the slopes of Mont Pilat, not far from Saint-Étienne (legend says that Pontius Pilate is buried in the massif).

He was struck by the isolation in which people lived and the lack of education in the rural area. After attending to a dying 16-year-old who did not know basic Catholic teachings, he acted upon his conviction for the need for a religious congregation of Brothers aimed at education.

He encouraged two young men to join him to form the core of the Marist Brothers, and others soon followed.

La Valla became the birthplace of the Marist Brothers, named after the veneration of and devotion to Mary.

Between 1817 and 1824 Marcellin started a primary school at La Valla which became a teacher training centre for his young Brothers.

Our group of pilgrims was privileged to celebrate the Eucharist at Marcellin’s old wooden table in his house at La Valla.

We stayed at the hermitage near St Chamond, where Champagnat built a novitiate. The building is a sign of his trust in God and the success the Brothers had become.

What strikes me about the life of St Marcellin Champagnat (he was canonised in 1999) is his absolute resolution to be a priest, despite the many setbacks, including failing the first year at his minor seminary. The multi-storey hermitage that he and his Brothers built is testimony to the determination they had.

An unexpected surprise for us on pilgrimage was the opportunity to participate in the Sunday Mass at Taizé, about two hours’ drive from St Chamond.

The spirit of the place is just as I imagined it would be. There is a tremendous sense of community among the different people from all over the world. I was excited to see so many enthusiastic young people. The place is simple, but the experience is very powerful.

And this month Taizé is coming to South Africa, on the Youth Pilgrimage of Trust in Cape Town.

At Taizé, I reflected on the life of the founder, Brother Roger Schütz, who as a 24-year-old left Switzerland shortly after the outbreak of World War II to establish a house that accommodated both Christian and Jewish refugees from Nazi persecution.

Later he established a monastery there to promote ecumenical ideas and work among the youth.

At the airport back in Rome I picked up a book written by a lesser-known young person, Greta Thunberg. She’s a young Swedish activist who, at age 15, began protesting outside the Swedish parliament about the need for immediate action to combat climate change.

Greta, still just 16 years old, is now an outspoken climate activist and has even delivered a TED Talk.

A few years ago she was diagnosed with Asperger’s syndrome and selective mutism. She has explained that selective mutism means she speaks only when she needs to. “Now is one of those moments,” she added.

She reminds us again of the power of young people. In a speech to British members of parliament earlier this year she told them: “You lied to us. You gave us false hope. You told us that the future was something to look forward to.

“And the saddest thing is that most children are not even aware of the fate that awaits us. We will not understand it until it’s too late. And yet we are the lucky ones. Those who will be affected the hardest are already suffering the consequences. But their voices are not heard.”

The message of people like St Marcellin, Br Roger and Greta Thunberg is simple: young people with a vision can change the world.

Dr Mark Potterton is the principal of Sacred Heart College Primary School in Observatory, Johannesburg. He was part of a Marist school leadership group who were on a pilgrimage to Rome and Champagnat country in France.