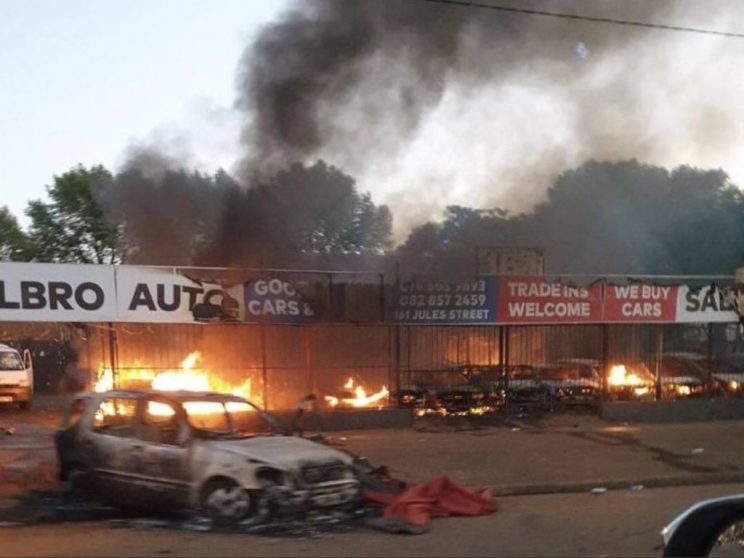 The violent acts, and burning and looting of business premises, mostly owned by migrants, in city centres and townships in Gauteng, have left the country in shock.

“The ongoing chaos has violated basic human rights and makes a mockery of the law enshrined in our Constitution,” said the Jesuit Institute of South Africa in a statement, signed by director Fr Russell Pollitt SJ, which condemned the violence, thuggery and looting.

The institute urgently appealed to law enforcement agencies, often working in difficult situations, to act tirelessly to maintain law and order, saying those responsible for criminal acts must be held responsible.

Some leaders have contributed to the violence by their irresponsible, populist remarks for political expediency, the statement said.

It noted that Archbishop Buti Tlhagale of Johannesburg had warned “attacks on migrants cannot just be reduced to hooliganism”.

Archbishop Tlhagale had warned: “When local communities go on a service-delivery protest, they take out their anger on foreign nationals. They harass them, attack them, destroy and loot their shops.”

The Jesuit Institute said that beneath much of the frustration and anger is despair at the lack of service delivery, economic empowerment and security of South Africa’s own people. Politicians, the institute said, must be held accountable for this.

“Statements by leaders condemning the violence…are not good enough anymore. Leaders who have made irresponsible remarks must publicly apologise to everyone living in South Africa. To those leaders we say, ‘Have the courage to take responsibility for your own careless words and hold yourselves accountable,’” the institute said.

Bishop Malusi Mpumlwana, general-secretary of the South African Council of Churches (SACC) in a statement appealed to all communities to desist from violence. “There should be no room for criminal acts of violence against people and properties. Such acts must be condemned everywhere, without equivocation,” the statement said.

Recognising that South Africans and non-South Africans worship together, the SACC is also calling on churches in all communities to offer a space to listen to perceptions of the problems, and creative solutions.

Bishop Mpumlwana acknowledged that some pertinent truths must be taken into account.

The bishop noted that the same poverty gnaws at citizens of neighbouring countries, whose people have for generations been contract workers building the now-troubled South African economy.

A large number of foreign nationals are in this country legally: as students, traders or business people, refugees from political persecution, expatriate employees of South African and global companies, and part of the African Union and the United Nations, the SACC noted.

“To promote attacks and blockade the movement of all these people because they are not South African is to shoot ourselves and our international relations in the foot,” the SACC warned, adding that it may lead to retaliation against the South African economy,  bringing even greater stress on the capacity to sustain jobs.