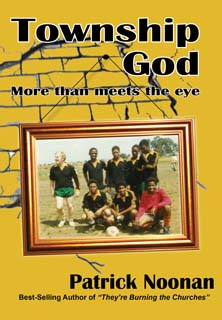 Although it might at first appear so, this is not a book about liberation theology, nor is it one of those sentimental glorifications of the South African political struggle which litter the literary landscape.

This is a continuation of Fr Patrick Noonan’s witness account of the 1980s, one of the darkest periods of South African history, when a general insurrection which heralded the beginning of the end of apartheid broke out first in the Vaal Triangle and then spread countrywide.

The Franciscan was one of a few white Catholic priests ministering in the Vaal townships of Evaton, Sebokeng and Sharpville.

The core of this tale began in his bestselling book They Are Burning the Churches, an explosive read that blew open the lid on the role of the churches in the township battles during the mass uprising.

There is a general paucity of good, popular but intellectually rigorous literature regarding this time, especially considering that this was the final reckoning between the dying apartheid state and the Mass Democratic Movement.

Catholic Church in the Struggle

There are still many questions and issues to be explored around the particular role played by the Catholic Church in the besieged townships before, during and after the uprising.

That this is of great importance cannot be overemphasised as the author is at pains to stress the fact that the role of the Church was a natural extension of Catholic Social Teaching as re-energised by Vatican II, whose real effect took 20 years to reach South Africa.

By all accounts the Catholic Church, as part of the South African Council of Churches collective and on its own, acquitted itself very well in the townships.

Fr Noonan’s approach is an eclectic mix of memoir, anecdote, diary, analysis, a bit of polemic; all rolled up into a passionate celebration of the good, the bad and the ugly of his time.

A central motif in the book is the author’s struggle to reconcile his traditional Western notions of pastoral care with the new, unfamiliar and challenging situation, and so far from support and home.

This uncertainty was also made worse by the occupational dangers of operating in what was practically a war-zone. On top of his more than normal pastoral workload, Fr Noonan had to deal with the attentions of the security police which had clearly marked — and probably tried to smear him — as a “political priest”.

Add to that the shocking crime, the drug-abuse and general lawlessnesss of the townships, especially in the aftermath of the insurrection, and one can well imagine that Fr Noonan’s ministry was not easy.

Perhaps the moment of vindication came earlier during the elections for a democratic South Africa but in the book the poignant one occurs during the 2010 World Cup in South Africa: “I was in tears: the flags on cars, the laughter, the infectious mood in the townships, the decorated churches…it was breathtaking, inspiring and at times mystical,” Fr Noonan writes, exclaiming: “And wasn’t it an answer to a prayer after all!”

Township God is available on www.writeonpublishing.co.za