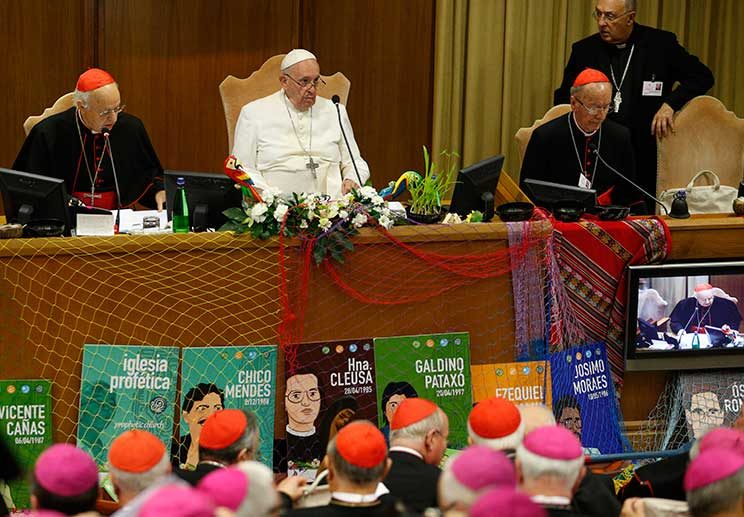 The premise of the video is that the Instrumentum laboris—the working document for the synod—failed to adhere to Catholic doctrine and was therefore the sinful work of the devil. As such, the video called on all Catholics to pray for the synod to fail.

A priest, who is a member of this group, gently reminded the poster that a synod cannot be sinful. A synod is a meeting of bishops and the Catholic faithful that discusses issues (including controversial topics) that affect the faithful in their lived experiences.

As such, Catholics should indeed pray for the synod, not for it to fail, but that those gathered in Rome may allow themselves to be inspired by the Holy Spirit to find solutions to current challenges, while simultaneously upholding the Gospels and the teachings of the Church.

The poster of the video didn’t much like the response and left the group, presumably to continue praying for the demise of the Synod on the Amazon.

To a certain extent, I understand the concern of the person who posted the video. An entire group of Catholics have expressed worry that this synod may change some of our longstanding ways of doing things in the Church and feel that this is intrinsically wrong, sinful even.

How would we differentiate ourselves from other Christian faiths (which we sometimes look down on because we feel they have diluted the true faith) if suddenly we had an option for married priests, or women in sacramental ministry, or lay people to celebrate the sacraments?

I suspect that traditionalists look on this synod as a potential loss of our Catholicity. They fear these proposed changes are inherently sinful and that the Church has lost its way by even suggesting such novel (not all that new actually) ideas. They fear that human souls may even be at risk of perdition if ministered to by persons they feel are in no condition to stand in persona Christi.

Let me stop for a moment, lest some readers think I am being flippant or mocking their concerns. That is not my intention. I admit that I also have my notions of a perfect Church.

For example, I cherish the gift and the sacrifice of celibacy that religious men and women make. Their ability to honour their vow is a powerful example for me. It helps me to be more faithful to my way of life and it shows me that in a sex-crazed world, chastity is possible. The idea that priests could one day be allowed to marry disrupts my perhaps romantic and naïve notions about a celibate priesthood.

But I am also painfully aware that our reticence in speaking about sex in the Church and the inability to integrate a healthy understanding of sexuality with a celibate lifestyle has led to many of the problems we have seen emerging over the past few years.

On the other hand, as a woman, I would love to see women increasingly in healing ministries. Healing in the Church is sacramental. Healing is both spiritual and physical and is often a journey of reconciliation and return to the heart of God. At present, only priests can confer the sacraments of reconciliation and healing. Through their sacramental priesthood, it is not them, but Christ, who forgives sin and brings healing.

There are so many women who are hurting. Their hurt does not allow them to see Christ beyond the man who is the priest. Imagine the good that women could do if they could walk that journey to healing and forgiveness in a sacramental way, rather than just one of spiritual accompaniment.

This brings me back to concerns about this synod and its potential to fundamentally change the way we do things as Catholics. As previous synods on the family, the youth, the new evangelisation, and the Church in Africa have shown, change in the Church is slow. The bishops are themselves divided on these issues and will not agree to sweeping changes.

We are not going to be ordaining women priests in the next year (or even 10 years). If a married priesthood is considered, it initially will be restricted to a particular context and very strict guidelines. Hopefully some actionable solutions may be found for the all-but-abandoned faithful in the Amazon and other isolated areas where it is difficult to have regular access to the sacraments. Whatever pastoral solutions they find, they will not be rolled out globally.

Instead, they will be tested within specific contexts. If they prove successful, then future synods will examine whether any decisions made at the Synod on the Amazon can be applied to the wider Church. It is a process that requires time, maturity, prayer, and discernment. That is how the Church has operated (for better or for worse) for the last 2000 years. It’s not going to change overnight.

The stalwarts (like the video poster) and the nostalgics (like me) share one thing in common. We love our Church. We want it to thrive. We want it to be a beacon of light in a dark world.

Ultimately, however, we cannot forget that the Church is not more than Christ. If the Church and her structures stand in the way of fulfilling the Great Commission that Christ gave us while on earth, to go and spread the Good News to the ends of the earth, then we have lost sight of the Church’s true purpose.

Who are we, then, to deny them the presence of Christ, so that we can abide by our rules and our image of a perfect Church? The Church is not perfect. It never has been. But it is the best vehicle we have to evangelise to a world that needs Christ now more than ever before.

Cardinal Hummes on the Synod: Don’t Fear What is New