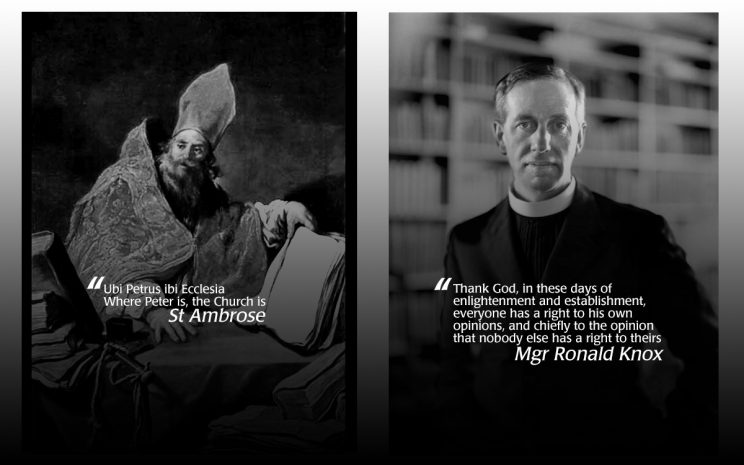 Saint Ambrose, the fourth-century bishop of Milan, coined the phrase “Ubi Petrus ibi Ecclesia” (Where Peter is, the Church is). He expressed it within the Church’s knowledge that Jesus Christ had made St Peter the firm foundation rock of his Church (Mt 16).

Because of his supreme authority as St Peter’s successor, in collaboration with his colleagues in the episcopate, the bishop of Rome has sometimes been described as the most influential leader on earth.

No wonder, then, that history records numerous attempts by secular and religious forces to take control of the process of electing a pope who will do their will and serve their personal or political interests.

We witness the effects of this history whenever the cardinal electors go into effective hiding to freely choose the new pontiff.

The current Synod of Bishops for the Pan-Amazon Region in the Vatican has aroused discontent from among a minority of conservatives. Some fear that Pope Francis has ulterior motives at the synod, such as allowing married men from local communities to be ordained priests, or abandoning other traditional ecclesial practices.

It would appear that such dissenters have deliberately muscled in on the publicity about the synod to manifest their own opposition to the pope’s path of following and implementing much of the direction of Vatican II.

Not fazed by these critics, Pope Francis has this month canonised, among others, Cardinal John Henry Newman, the Oxford scholar and churchman who perhaps influenced the documents of Vatican II more than others.

St John Henry Newman moved intellectually from denying the importance of the bishop of Rome to full acceptance of the essential function of Peter in the structure and dynamics of the Church. He applied reason to faith and drew his conclusions with prudent consideration.

Pope Francis is similarly applying reasonable arguments to the fundamentals of faith and mission, and doing so in the company of his brother bishops.

He reminded them that the Holy Spirit was the primary actor in their deliberations.

The present synod has set out to identify new paths for the evangelisation of the indigenous people of the Pan-Amazon region, where they seldom receive the pastoral care and encouragement they need from the Church.

Like all public organisations, the Church has members who think ahead and have progressive ideas. It also has conservatives who fear that untraditional ideas will shake the establishment irrevocably.

But it is disgraceful that his bitter opponents have labelled Pope Francis a communist, a heretic and even an apostate. Some of their claims against his motives are downright nonsense. There may be some sincerity in their wish to defend the faith. They may want others to back them. But their enthusiasm is dangerous.

Another Oxford scholar, Mgr Ronald Knox, who died in 1957, cautioned in his book Enthusiasm that zealots in the Church who claim to be right and others wrong, eventually split into groups and often from the Church. He warned that enthusiasm often abandons reason: “In itself enthusiasm is not a wrong tendency but a false emphasis.”

The false emphasis that some enthusiasts place on their own agenda, above that of the Church and its mission, is never convincing.