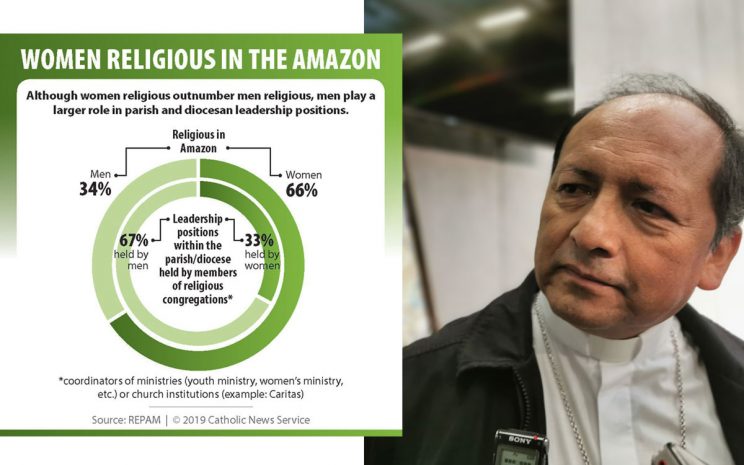 By Junno Arocho Esteves – The way to rid the Catholic Church of clericalism is by giving laywomen a greater role in making decisions, a Bolivian bishop said.

Bishop Ricardo Ernesto Centellas Guzman of Potosi said that before considering the proposal from some members of the Synod of Bishops for the Amazon to ordain women deacons and married “viri probati,” or men of proven virtue, the current “model of the church, which is too hierarchal, must change.”

“It isn’t a question of adding another piece to the chessboard. It’s a question of organising things in a different way,” he said.

During a synod news briefing, Bishop Centellas told reporters that while women are “the majority” in the church, “their participation in the organisation and decisions in the life and mission of the church is very little.”

When asked to elaborate on the role of women in the church, Bishop Centellas told CNS that currently the church is suffering from a serious sickness “that we have been fighting against for the past 50 years but have been unable to eradicate.”

“That sickness is clericalism,” he said. “So, it isn’t a question of a diaconate for women or ‘viri probati.’ The problem is the model of the church. I believe Pope Francis had a special intuition in his document ‘Episcopalis Communio’ (‘Episcopal Communion’) when he said that we must invert the structure; lay people above, clergy below.”

In the document published in September 2018, the pope updated rules for how a synod is prepared for, conducted and implemented and emphasized the need for bishops to listen “to the voice of Christ speaking through the entire people of God.”

“A bishop who lives among his faithful has his ears open to listen to ‘what the Spirit says to the churches,’ and to the ‘voice of the sheep,’ also through those diocesan institutions whose task it is to advise the bishop, promoting a loyal and constructive dialogue,” the pope wrote.

Bishop Centellas told CNS that the goal of giving women a role in making pastoral decisions begins at a local level, in dioceses and parishes.

“If, for example, we have a female president of a pastoral council with a vote, with a right to decide, then things will change. The pastor no longer dominates; instead the president decides,” he said.

Nevertheless, the Bolivian bishop acknowledged that the eradication of clericalism “is a very long process of a change of mentality” that will not happen just by ordaining women deacons or married men.

“I think the problem is that we have yet to understand what it means to be a church of communion, a synodal church,” he said. “With the current structures, we won’t go very far.”