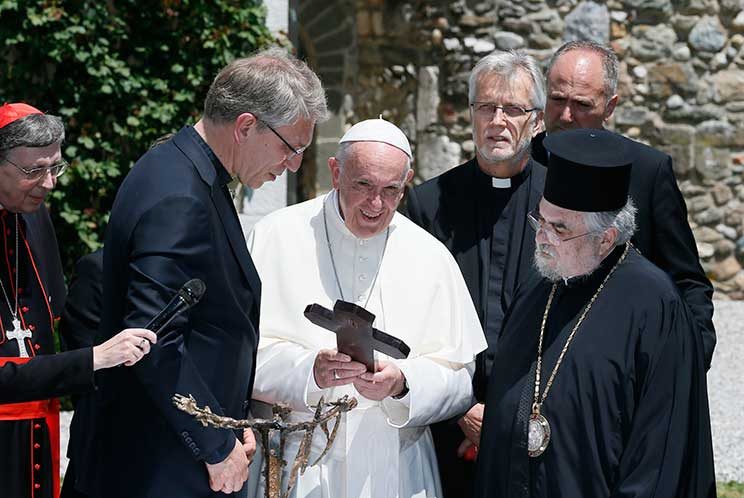 Pope Francis exchanges gifts with the Rev. Olav Fykse Tveit, general secretary of the World Council of Churches, and other Christian leaders at the WCC’s Ecumenical Institute at Bossey, near Geneva, in 2018. Responding in October to a WCC document on the nature and mission of the church, the Vatican said that while Catholics cannot share the Eucharist with other Christians, they can and should pray and work together. (CNS photo/Paul Haring)

By Cindy Wooden – Working for Christian unity and engaging in formal theological dialogues to promote it obviously raises questions about what the nature and mission of the church is.

In a project that took two decades of work by Orthodox, Anglican, Protestant, Catholic and Pentecostal theologians, the World Council of Churches in 2013 published a document summarising the points of greatest consensus.

In late October, the Vatican gave the WCC its formal response to the document, which was called “The Church: Towards a Common Vision.”

The response, coordinated by the Pontifical Council for Promoting Christian Unity and posted on its website, included input from Catholic theologians from around the world, bishops’ conferences and the Congregation for the Doctrine of the Faith.

What is meant by “church” is a key ecumenical question as Christians work and pray for the unity Jesus wanted his followers to have, the Catholic response said.

Or, as the WCC document said, “agreement on ecclesiology has long been identified as the most elemental theological objective in the quest for Christian unity.”

In the Creed, Christians profess a belief in the “one, holy, catholic and apostolic church,” yet they differ on what Christ intended for his church, how it should be governed and how it should minister in the world.

“From a Catholic perspective,” the Vatican said, “the term ‘church’ applies to the Catholic Church in communion with the bishop of Rome. It also applies to churches which are not in visible communion with the Catholic Church but have preserved the apostolic succession and a valid Eucharist, remaining true particular churches. Other Christian communities which have not preserved the valid episcopacy and Eucharist are called ‘ecclesial communities'” in official Catholic documents.

The Vatican said of the WCC document, “While it presents a remarkable degree of common thinking on a wide range of important issues, it does not claim to have reached full consensus, the full agreement on all issues which is necessary in order to achieve full visible unity among the churches.”

The text, however, does show common agreement on “significant ecclesiological doctrines,” the Vatican said. Further theological dialogue is needed and, especially, study of the WCC document by Christians of all denominations.

Of fundamental importance, the Vatican said, is the document’s affirmation that “certain aspects of church life are to be considered as determined by God’s will,” although the WCC did not find enough consensus yet to affirm that “the threefold ministry of bishops, presbyter and deacon” is one of those aspects. The Catholic Church, of course, believes it is.

Still, the Vatican said, the document “traces ordained ministry to the Lord’s choice of the Twelve” and, in that way, “promotes the view that certain aspects of the church’s order were willed and instituted by Christ himself.”

The Vatican praised the WCC document for recognising that “the three essential elements of communion concern faith, worship and ministry or service” and for acknowledging that both Scripture and tradition are necessary sources for determining what “church” means.

While the document uncovers “greater common ground in ecclesiology” than many people would have imagined possible, the Vatican noted that it did not treat the papacy or the role and ministry of the pope, the successor of St. Peter.

Other “unresolved concerns include who may be baptised, the presence of Christ in the Eucharist, the relation of the Eucharist to Christ’s sacrifice on the cross and churches who do not practice baptism or Eucharist,” the Vatican said.

Many modern developments within the Catholic Church, like a growing understanding of the church as a communion given life by the Trinity and an increasing emphasis on the need for “synodality,” also are recognised by other Christian communities and present in the WCC document, the Vatican response said.

“The most fundamental convergence is found in the affirmation that unity among Christians is vital for fulfilling the church’s mission of proclaiming the good news of reconciliation in the Lord and that this is a biblical mandate,” the response said.

The WCC also asked churches and Christian communities to look at areas in their lives that may need “renewal” in the light of the agreed principles and the commitment to Christian unity.

“The Catholic Church,” the Vatican said, “commits itself to respond to the call to grow in holiness,” to continue the process of renewal begun at the Second Vatican Council, “to being the church of the poor and for the poor,” to continue developing its “current practice of synodality,” and to strengthening laypeople in their role as missionary disciples.

While it is “painful,” the response said, the Catholic Church insists its members cannot celebrate the Eucharist with members of other churches. However, it said, “we will renew our commitment to do together whatever we can do together, even in the context of the liturgy.”

Those possibilities, the Vatican said, include the rite of washing the feet, the imposition of ashes on Ash Wednesday and celebrating prayer vigils and liturgies of the Word for major feasts such as Christmas, Epiphany, the Ascension, Pentecost and the feast of Ss Peter and Paul.