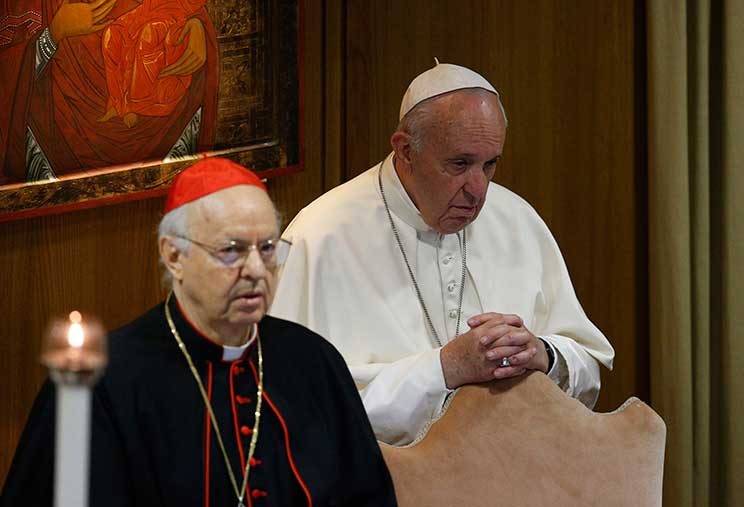 By Cindy Wooden – While the Synod of Bishops for the Amazon is focused on one small, but important geographical area, the issues involved impact the universal Catholic Church, said Cardinal Lorenzo Baldisseri, secretary-general of the Synod of Bishops.

As a “special assembly” rather than an “ordinary general assembly” of the Synod of Bishops, the members of the synod for the Amazon are mainly the bishops of the Amazon region of nine South American countries, and the discussions will focus on evangelisation and safeguarding creation in that region, he said at the opening session.

But, “while regarding a specific geographic area, it is still a synod that interests the universal church,” Cardinal Baldisseri said, so the heads of Vatican offices and representative bishops from around the world also are voting members.

Presenting some nuts-and-bolts information about the synod members and the meeting’s functioning, the cardinal was greeted with applause when he announced that, beginning with the afternoon session, synod members were free to wear clerical suits rather than cassocks to the meetings.

He listed the 185 voting members as: 137 participating because of the office they hold, including 113 from church jurisdictions in the Amazon, 13 heads of Roman Curia offices and 11 bishops and priests from the council that prepared the synod; 14 religious priests and one religious brother elected by the Union of Superiors General; and 33 members named by the pope.

The discussions in the hall were to treat topics according to the order they are presented in the synod working document, which was published in June after consultation with bishops in the region, the offices of the Roman Curia, religious orders, Catholic faithful in the Amazon and representatives of the indigenous communities there.

The document – including its references to indigenous spirituality, the possible ordination of married elders to respond to a serious shortage of priests and to climate change and the devastation of the forests fueled by greed – has been criticised by a handful of commentators. The critics, including a few cardinals, have said the document appears to promote pantheism and an end to mandatory celibacy for most priests in the Latin-rite church.

Cardinal Baldisseri told members of the synod that the working document is “the point of reference and necessary basis for synodal reflection and debate and is not a text to be amended.”

But the working document’s function and utility end, he said, when the first draft of the final document is prepared and presented to synod members for discussion, amendment and a final vote.

With a few exceptions, synod participants will gather for sessions in the morning and late afternoon Monday through Friday and Saturday mornings through until October 26.

Each of the 185 voting members, 55 observers, six fraternal delegates from other Christian communities and 12 special guests will have one four-minute opportunity to address the entire assembly, although Cardinal Baldisseri asked them to consider the option of keeping their input for their small groups.

In addition, the afternoon-evening sessions will include one hour of free discussion, which the cardinal said is designed “to offer a space for open dialogue and sincere debate.” The session is not the time for “a second speech,” he said, but to react to another’s speech, request clarification or express support for or disagreement with another’s point.

General sessions will alternate with small-group work throughout the meeting, he said.

A first draft of a document summarising the speeches in the hall and “especially” the summaries of the small group discussions will be presented Oct. 21, he said. The small groups will discuss the draft and propose amendments to it.

The final document will be presented to the assembly the morning of October 25 so that members have time to study it before voting on the document the afternoon of Oct. 26. The closing Mass for the synod is scheduled for October 27.

Cardinal Baldisseri also announced that in order to offset the carbon emissions caused by airplane flights to bring participants to Rome and by the electricity used in the hall, the Vatican would spend about $11,000 to plant trees on a 50-acre site in the Amazon basin. The paper used at the synod has been certified as recycled, he added, and the bags given to each participant to carry their papers are made of a natural fibre.